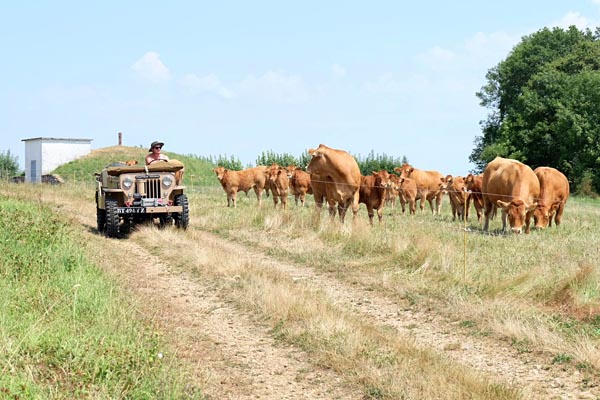 Corrèze is a département (province) in south-central France, named after the Corrèze River. After insects devastated the area's wine industry in the nineteenth century, Corrèze became known for more diverse agriculture, particularly fruits and vegetables shipped to larger French cities. 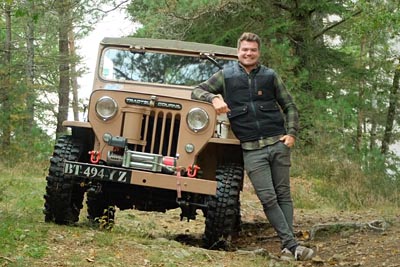 Next door to Corrèze is the département of Cantal, where the higher altitude favors cattle and dairy farms. Cantal is also where Bernard Cournil began modifying Jeeps after World War II, and developed the Jeep-based Tracteur Cournil. (See the history of The Cournil Jeep Tractor on CJ3B.info.)

Thirty-five year old Guillaume Jean, who grew up in Corrèze, travelled to Cantal in 2011 to buy an early Cournil Tractor, which he has completely restored over the past seven years. The Tracteur Cournil badge on the front reflects a number of mechanical modifications including a diesel tractor engine. 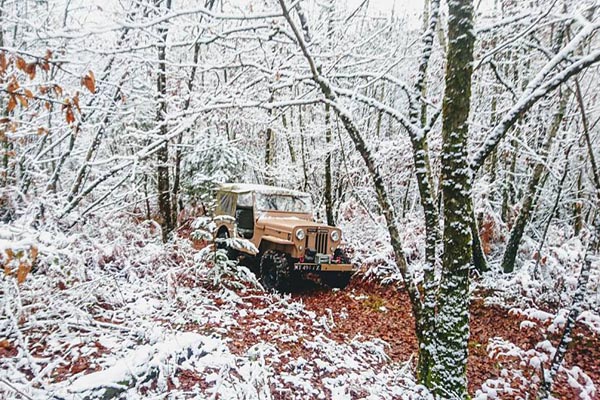 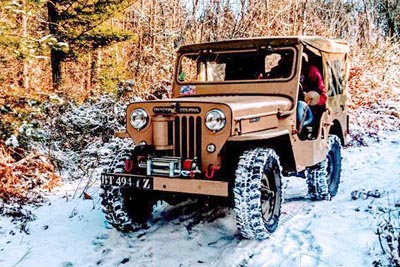 Guillaume is the third owner of this 1954 Hotchkiss-Willys JH-101, originally assembled at the Hotchkiss plant near Paris, with parts coming mainly from Willys in the U.S. It was modified by Bernard Cournil at his shop in Aurillac, the capital of Cantal.

The original JH-101 headlights were rusted out, so Guillaume replaced them with the slightly smaller pair from a JH-102. 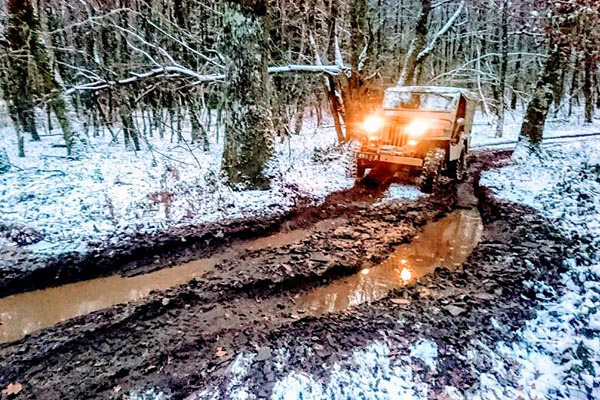 Although the Jeep is a collectible rarity, Guillaume also likes to use it offroad, and the Cournil upgrades intended for heavy agricultural use make it a capable offroader. 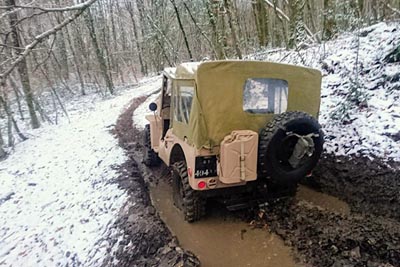 He estimates he spent 1,400 hours restoring the Jeep. He has given it a military look, with details like the jerry can, blackout taillights, and a desert sand paint color, which he says is actually very similar to one of the four original colors used by Cournil. This particular Jeep was originally a light green. 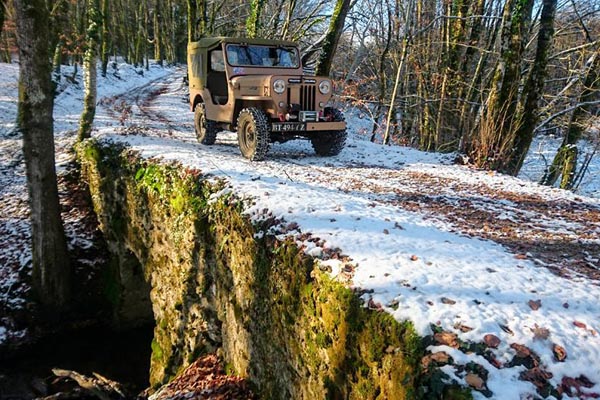 Another military-inspired detail is a coolant overflow reservoir attached to the front grille. This type of expansion tank was often installed on jeeps in Africa during and after World War II, and is a logical addition to a vehicle that could be used for long hours of farm work. 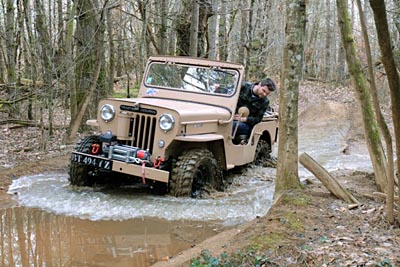 Guillaume says in French he is a "très grand fan de Jeep." He has owned a Wrangler JK for five years, and has travelled with it in France, Spain and Africa. An interest in the wartime British SAS jeeps in Africa helped inspire the look of his Hotchkiss-Willys-Cournil restoration. 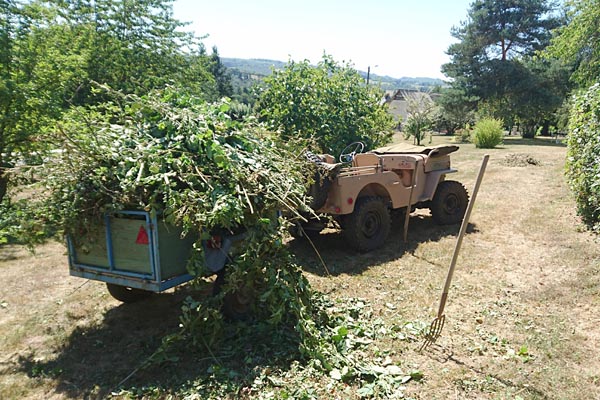 He says he was familiar with the tracteurs for some time before he bought his own, because a neighbor in the countryside of Corrèze owned a Hotchkiss JH-102 Jeep with a Cournil frame, and a later Cournil model JA2 (which had the new, unique body designed by Bernard Cournil and used on models beginning with the JA1 in 1961 -- see the history of The Cournil Jeep Tractor.) 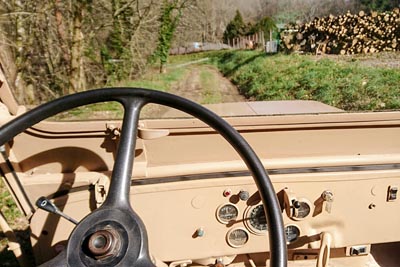 Cournil Tractors of the 1950s still looked like Jeeps despite their distinctive frames and drivetrains, because they used largely unmodified Hotchkiss bodies, although some had the rear part of the tub cut away to make it easier to mount farm equipment. 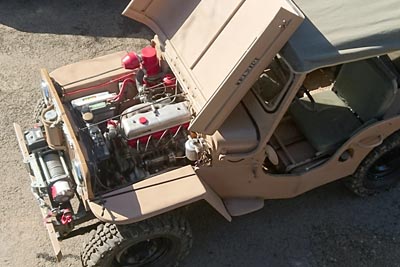 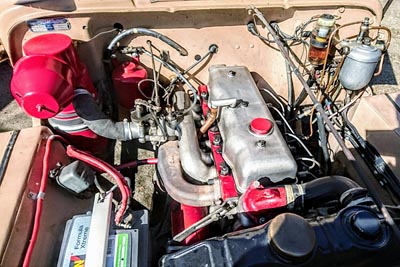 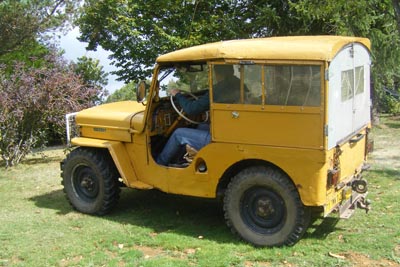 This is the Jeep as Guillaume purchased it. He says it's the only one he's seen with the Hotchkiss-Willys chassis and the Standard 20C diesel with 90 degree injectors. Later engines included a Standard with injectors at 45 degrees, which added five horsepower. 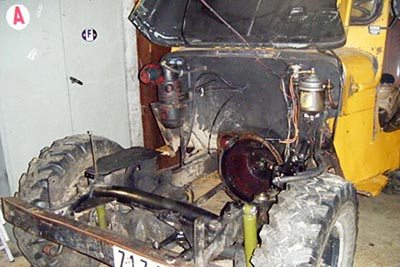 Cournil modified the bellhousing to mate the diesel to the T90 transmission and T18 transfer case. Some of the gearing was changed to provide greater reduction, and provide more robust gears that were machined in the Cournil shop. 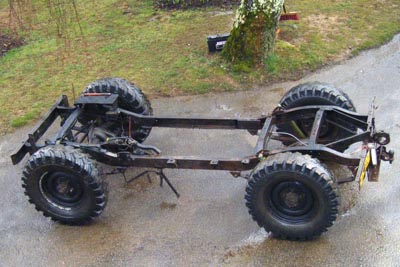 The frame has reinforcement added by Cournil to support heavy use. See the larger copy of the photo (340K JPEG), and a closeup photo (100K JPEG). 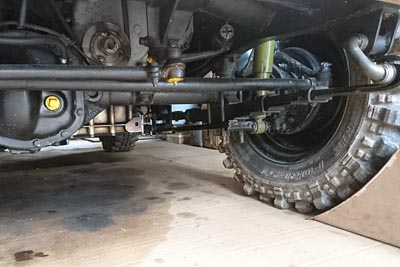 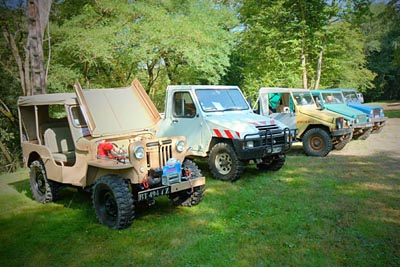 The Jeep is seen here with some post-1960 Cournils, at a 2016 gathering in the town of Pandrigne. Guillaume says he knows of five other survivors out of about 170 built with Hotchkiss bodies. Other surviving Cournils have the later body design with the sloping front. 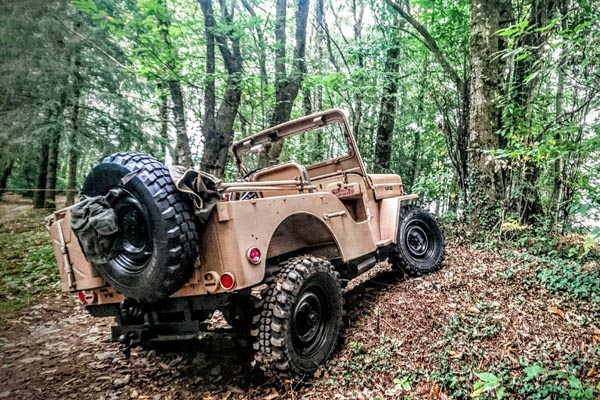 The tires are Extreme Forest 700R16 remolds made in Italy by Ziarelli. The rear axle is a Dana 44 with gearing installed by Cournil for a 5.88 ratio. 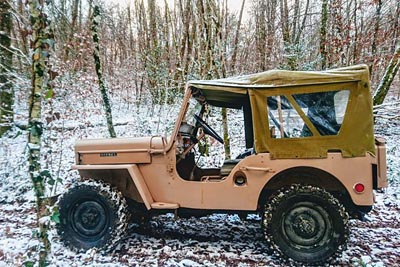 The "diesel" badge on the hood is an another original Cournil detail. 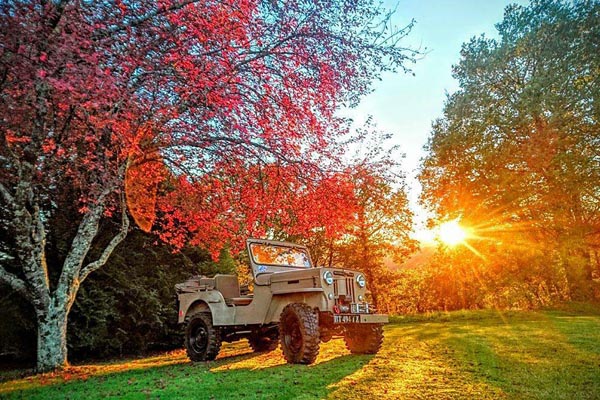 Thanks to Guillaume for the great photos of his unique restoration. -- Derek Redmond


See the history of The Cournil Jeep Tractor and photos of another Surviving Cournil Tractor on CJ3B.info.