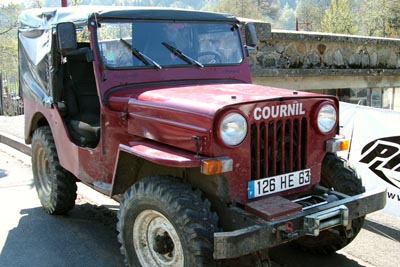 Hubert Cossard sent these photos of a French rarity, a Cournil Jeep tractor from the late 1950's, built using a Jeep Hotchkiss JH-101 body. Hubert took the photographs in April 2006 at Chambon sur Jeep 2006, a rally of 350 Jeeps in Auvergne, France. He couldn't find the owner to confirm the details, but he thinks the body was original, given its condition.

As related in the history of The Cournil Jeep Tractor on CJ3B.info, the Jeep tractor was built by hand in small numbers at Bernard Cournil's factory in Aurillac in mountainous central France, starting in 1946. When Hotchkiss in France began building their JH-101 version of the CJ-3B in 1955, Cournil also started buying their high-hood bodies. 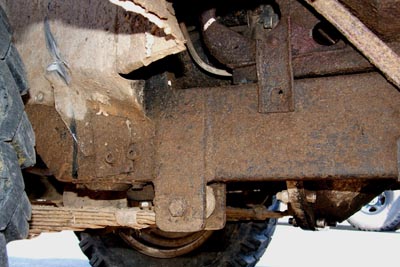 The frame on this example is clearly original, and what makes the Cournil remarkable to a Jeep fan is the heavy tubular frame. This photo shows the rear mount for the front springs -- and perhaps a bit of manure in the tire tread, which might confirm the tractor still works on a farm.

Hubert mentions that the original diesel engine in this Cournil had been replaced.

Thanks to Hubert Cossard for the photos. See also the history of The Cournil Jeep Tractor, and another early Cournil Tractor Restored. -- Derek Redmond

Return to Jeeps Around the World or to Unusual CJ-3B Photos on CJ3B.info.