Details of a Right-Hand-Drive Universal Jeep

Being an Australian who was totally new to Jeeps and had only had any real contact with WWII MB and GPW vehicles at parades and such, I was totally intrigued when introduced to the early CJ's. Oh, I'd seen a few CJ-7s about on the roads in the eighties, but the "big-eyed" flatfenders were something else again -- they seemed sort of like modified wartime Jeeps. Needing a new project to keep me occupied, I started looking around for one of these to restore. The first two I saw were a 2A and a 3A -- both left-hand-drive and way past an original restoration proposition. The next was a 3B and while that high hood was a bit of a shock to see the first time, I decided to "enter into negotiations." He wanted too much, and anyway, it too was LHD. 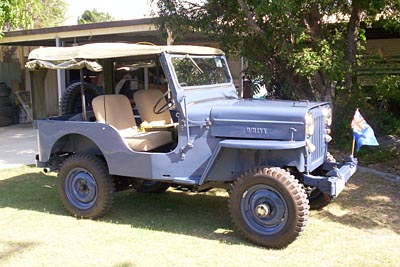 Finally I was told about an ex-Air Force Jeep, and when I arrived on the property to inspect it, it turned out to be a 3B with right-hand drive -- which I bought. I restored it as best I could, and that meant many trips to CJ3B.info. But that eventually led to the question of when the RHD drive Jeep was developed -- and by whom?

Was it a home-grown Aussie engineering accomplishment? Did the Japanese do the work? They did, after all, produce a very large number of CJ-3Bs and eventually made vehicles which were a quantum leap ahead in mechanical design and yet still obviously children of the 3B. Or could it have been India? They too made large numbers of Jeeps and Jeep clones. No. That's the simple answer. All of these right-hand-drive countries mentioned (and others like South Africa) had only made RHD Jeeps many years after the original was produced in the U.S.

As mentioned in Jeeps in Australia on CJ3B.info, some Jeeps were converted by the seller, such as Dominion Motors in Brisbane. But it was not until 1958 that Willys Australia actually made and sold a RHD vehicle. It was about that time before Japan finally changed too. In India it apparently didn't happen until some ten years later. So where did the development happen?

Well, here comes the assumption by a relative newcomer to the Jeep brand, and why I reckon the question is still essentially unanswered. This assumption is that RHD Jeeps were developed in the United States, primarily for home use by the U.S. Postal Service (220K JPEG). They were based on the DJ-3A Dispatcher and mainly two-wheel-drive, but they appeared years before any right-hand-drive country produced their own licensed copy of a Jeep vehicle in RHD for their own market! (See also U.S. Mail Via CJ-3B on CJ3B.info.) 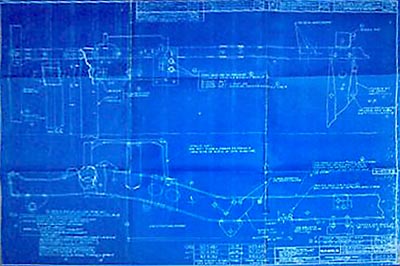 So here is the biggie; why? Why were there Jeeps in the U.S. that were RHD years before they were made elsewhere? Why didn't Australia import RHD vehicles in the early fifties instead of eventually building them in the late fifties? Surely it can't be that the RHD conversion developed couldn't be used on four-wheel-drive vehicles; the early two-wheel-drive DJ is just too close to its 4WD brother. It's the unanswered question....

A query came up on the CJ-3B Bulletin Board: How was the right-hand-drive Jeep 'set up'? I think a Canadian reader asked the question, and I answered as best I could. Now here, I think, is a better description -- and we can also add photos: 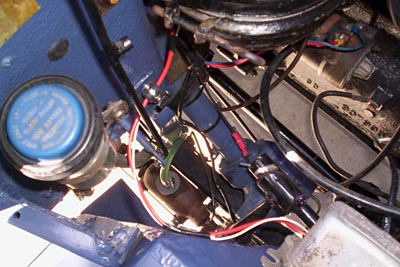 The right-hand rail of the frame, or chassis, is reinforced with an inner gusset plate and crush pipes. The Ross steering box is bolted to the inside of the right-hand chassis rail, and the pitman, or drop, arm is mounted upside-down so that it points up from the shaft (see a closer view from above, 110K JPEG). 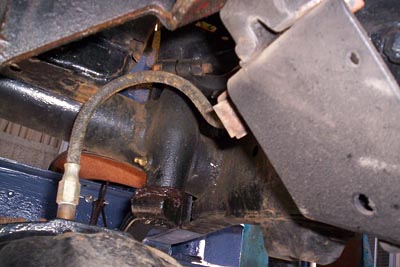 This arm is linked by the drag link to an idler box on the front cross member. The idler box (or bell crank) consists of an upper arm and lower arm and shaft. This lower arm is welded to the approximately six-inch-long shaft, and the shaft runs in needle rollers in a tube welded to the round cross member. The upper arm is keyed and clamped to the shaft with a circlip added as a safety precaution to stop the arm slipping off if anything comes loose. All this, the bell crank assembly, is mounted underneath the battery tray, which has a hole in its rear leg (110K JPEG) to allow the drag link to pass through. 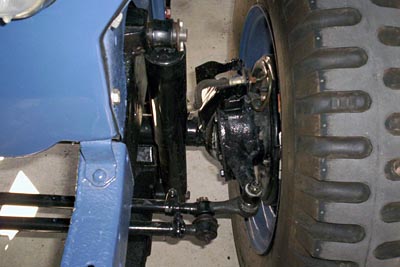 One weak point is the tie rod end with the two eyes, on the left hand side. What tends to happen is that when the steering wheel is turned right, the rod rolls around its axis as the tie rod to the bell crank pulls on it. It rolls back again as the tie rod pushes on it when the steering is turned left. This means that there is a certain amount of play in the steering seemingly by design. On my particular vehicle it is exacerbated by the fact that the suspension is slightly higher than standard and therefore the bell crank tie rod runs on a slightly more acute angle to the wheel to wheel rod. It's no biggie, but a small weakness nonetheless. 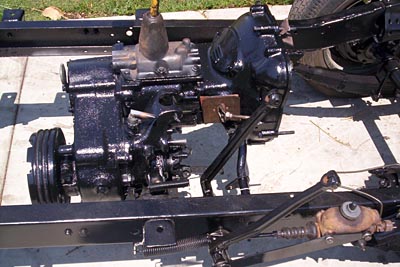 The pedals for the brake and clutch are situated either side of the right-hand chassis member. The brake master cylinder is mounted on the outside of the chassis rail and actuated by a push rod from the right hand pedal. There is no fill hole in the floor to service the master cylinder and this must be done from under the vehicle. (It's a real pain.) The clutch pedal actuates a push rod (140K JPEG) to a cranked shaft mounted between the bell housing and the inside of the right chassis rail. A lever on the inner end of this shaft pushes a rod acting directly on the clutch lever, so pushing the lever back and disengaging the clutch. 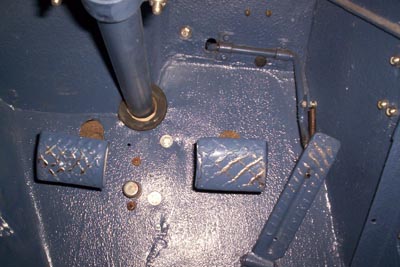 The accelerator pedal pushes, on its upper quarter, on a long serpentine lever. This lever has a lower arm (to the pedal) and a horizontal section with two small bearings, and then an upper arm. The upper arm passes through the firewall and at right angles to it. 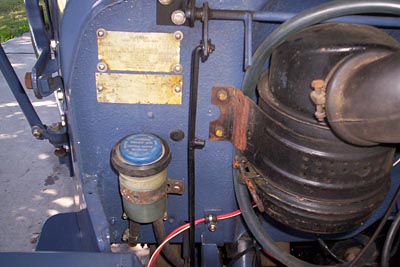 A long thin rod attaches to the arm on the engine side of the firewall and actuates by a lever a cross shaft mounted between two bearings on pedestals mounted at right angles to the firewall. These two pedestals are placed about twenty six inches apart and the shaft has a small lever near its center (130K JPEG). When the accelerator pedal is pushed down, the center lever moves up and by a short rod pulls the throttle open on the carburetor. 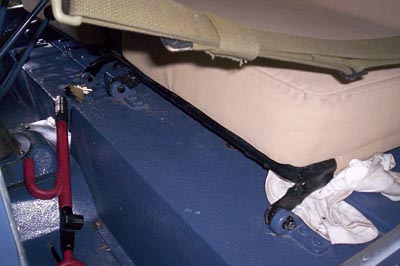 Though not related to the actual moving of the driving position from left to right, there are a few other differences to the Australian Willys Jeeps. There is a seat box (130K JPEG) mounted over the fuel tank, and the left hand seat is mounted with the same hinges at the front as are fitted to the right hand seat (the usual seat mounting for a passenger seat in a left hand drive Jeep.)

Some of the electrical parts are different -- starter, generator etc. We also know that the 'T' handle for the hand brake came to the RHD Aussie vehicles a few years earlier than in the U.S. But some differences catch you out: the fuel tank itself must be Australian as it uses a different size filler neck and cap! 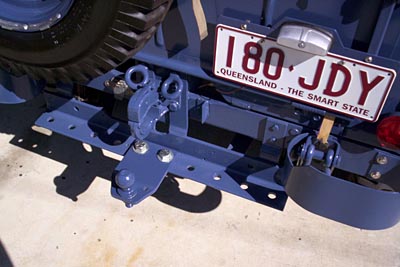 And then there's the draw bar -- it looks the same but has BHP stamped on it, so it too must be local manufacture (Broken Hill Proprietary -- a large steel producer in New South Wales.)

All the modifications to make the Jeep RHD appear to use many ordinary Willys parts but a check through the parts manual suggests that very few LHD parts are actually used. The whole throttle linkage is obviously fabricated for the purpose, but the cross shaft for the clutch actuation and even the steering box are listed with different part numbers to the LHD assemblies. There are a great many changes made that are not readily noticeable. That is, they are not just simply moved from one side to the other.

CJ-5s, 6's and a few Forward Control Jeeps were also made from about this time (1958) in Australia and apparently used many of the same parts for the steering. See also some notes on CJ3B.info regarding Willys Australia Parts Numbers.

Ken Bushdiecker has reported on the CJ-3B Bulletin Board regarding references to right-hand-drive parts in Willys manuals: "I find no reference to RHD previous to the 2/1962 Jeep Universal Parts List. (My lists only go back to 11/1956.) The 1962 Parts List has in the end of the book a 13-page section (10 pages of parts description and 3 pages of numerical listing) titled: 'Parts Peculiar to Right Hand Drive Jeep Universal and Dispatcher Models -- CJ-3B,CJ-5,CJ-6, and DJ-3A.' As expected one can see that CJ-5 and CJ-6 parts required are nearly identical. The CJ-3B parts are at times identical yet often different to the other models, as are the DJ-3A parts.

"Upon examination of numerical listings one can see that some part numbers go way back to the early 'A' numbers while other numbers are obviously superceded. The 'A' numbers would likely be CJ-2A timeline? The 11/1965 Universal Parts List is an exact copy of the 2/1962 list, except that the 11/1965 edition was published by Kaiser Jeep Corp. and is a looseleaf binder. In the 1966 #1185 and later Parts Lists, nearly all RHD reference has been omitted. I only find a total of 38 different RHD entries in all the last Kaiser Jeep Corporation or AM Jeep Corporation parts lists.

"I have checked out nearly all Mechanics Manuals and Service Manuals covering the Universal Jeeps from 1953 and later (about 12 of them.) I find no RHD information contained in any of those books. This leads me to believe that service for RHD was most likely produced as a special RHD supplement booklet."

Thanks to Rossco for throwing some light on this topic, and to Ken Bushdiecker for his assistance. -- Derek Redmond