A 1958 letter to CJ-3B owners (25K GIF) from Dominion Motors (who imported Willys Jeeps prior to the establishment of Willys Motors Australia) suggested a kit of spare parts recommended for every new owner, "particularly the owner who is far removed from service facilities." Attached to the letter was the following list of parts in the kit:

The two most expensive items in the list were the water pump repair kit and the carb rebuild kit. Apparently the parts were all or mostly imported -- the numbers seem to be the standard Willys part numbers.

A member of the Australian Land Rover Owners Group posted this comment in 2010: "A lot of Australian-made Jeeps had Lucas distributor, starter, generator and reg, switches and instruments (mine did and they were quickly replaced with Autolite stuff that works.) Borg-Warner diffs and gearbox of local manufacture were also fitted. The gearbox worked and looked the same, but the main shaft is stronger on the local box and a lot of parts will not interchange. Springs were locally made and not to the standard of the American stuff. It all changed around a bit depending on parts available locally, year models, and the need for high Aussie content for govt. taxation purposes. Aussie content improved more with the Falcon motor (Combat Six) being fitted. Then the farmers, when they got their power, wanted more comfort and this led to the XY Falcon ute with Aussie Jeep running gear under it, after Ford took over the Jeep factory."

Vaughn Becker provided the text from the inside cover of a Willys Motors Australia Parts Book for Universals and Trucks 1941 through 1959, which has some interesting information regarding part numbers for Australian-manufactured parts:

This Parts List relates to Parts and Accessories manufactured in Australia for Willys Motors (Australia) Pty. Ltd. Each part listed herein has been exhaustively tested to ensure that the rigid requirements laid down by our Engineers are strictly adhered to.

The listed parts are set out in Group Section for ease of reference, and follows the established Willys Parts Procedure. The suffix letter "J" following the part number denotes that the part is of Australian manufacture and that the part, in its entirety, is interchangeable with the original Toledo manufactured counterpart. 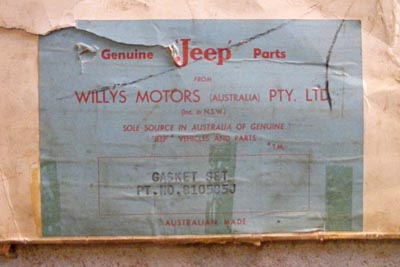 The D20, 000 part number series have been established to indicate that the part, although interchangeable as a complete unit with the original Toledo unit, is not identical in all respects and that the component parts of each unit are not interchangeable.

e.g. Part Number D20003 Spring Assembly will replace 802737 but the individual leaves are not interchangeable.

(Parts bearing the D20, 000 series are fitted to Australian produced vehicles as part of their initial equipment - such vehicles may be identified by the addition of a distinctive blue plate fitted adjacent to the Toledo plate)

The Parts List includes all the replacement details of original Toledo manufactured parts.

The normal Willys Motors (Australia) Pty. Ltd. warranty applies to all items listed in this publication. This warranty is valid for 90 days from date of fitment to a vehicle or for the first 4,000 miles after installation of such a part, whichever termination is first reached.

IMPORTANT -- The warranty accompanying Willys motor vehicles becomes null and void when parts not sold or not approved by Willys Motors are used for replacement of original equipment.

Thanks to Vaughn, and to Greg Wilkens for the parts box photo. -- Derek Redmond