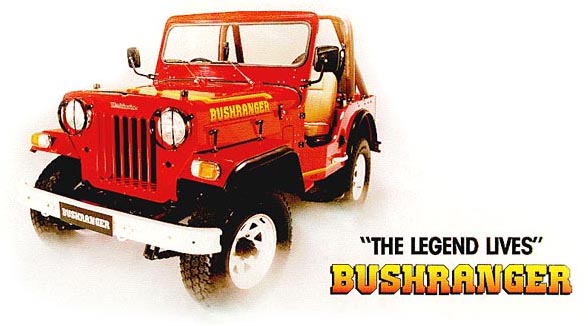 As with the importation of Mahindra-built Jeeps from India to Britain (see Mahindra Jeeps in the UK), the marketing of Mahindra in Australia in the 1990's was not an overwhelming success, but it did result in some interesting models, developed for the destination country.

The model names indicate that Mahindra & Mahindra were making a serious attempt to find a market in Australia: the basic "Stockman" model (available in green only) and the slightly upscale "Bushranger" certainly appeared better targeted than the mixed bag of models in the UK ("Indian Brave", "Marksman" and "CJ Deluxe").

Below are a few pieces of literature which provide fairly detailed information about the Australian Mahindras.

"Mahindra 4WD - India's Jeep", from Collector Series Vol. 21, issue 28, May 1992. This article from a 4WD trader magazine reviews the history of Mahindra and its arrival in Australia, and describes the Bushranger and Stockman models (90K GIF's):

Thanks to Jeff Spencer for scanning the brochure and the articles. -- Derek Redmond

See other Jeeps in Australia and other Mahindra Jeeps on CJ3B.info.