As I write this in August 2010, the very active forest fire season on the west coast of North America has just resulted in the deaths of two pilots, in the crash of their water bomber in British Columbia. Another reminder that despite the technology, fire fighting continues to be a very dangerous job.

The photograph seen here shows the resources available to fight wildfires 55 years ago, and includes an early CJ-3B in use by a fire crew in 1955. The picture is from the LIFE magazine photo archive, and the photo is listed as being taken on 29 August, 1955 by J. R. Eyerman, on an assignment known as "Wood Essay: Oregon (Forests And Logging)." I don't know when this photo essay may have been published.

That information led me to assume the picture was taken in Oregon, but according to the photo archive of the Forest History Society in Durham NC, the photo was taken in Shasta-Trinity National Forest, California, and on 10 August not 29 August. 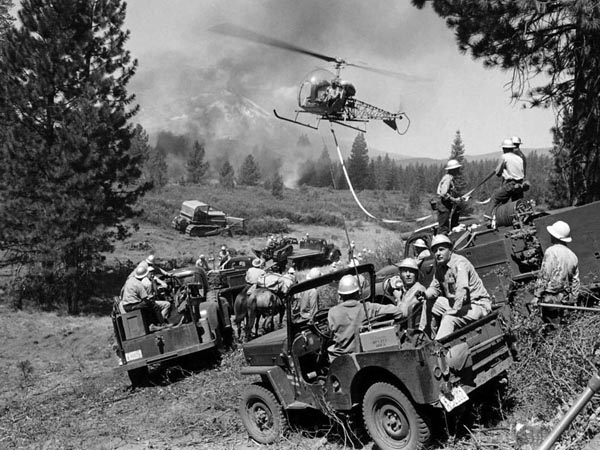 The black & white version of the photo, which gives a good view of the Jeep, was found in the LIFE archive by Federico Cavedo. It shows a small wildfire underway in the background, and firefighters heading toward it in trucks and on horseback. A bulldozer and trencher are preparing to go into action, and a helicopter is helping to lay hose.

The Jeep appears to be carrying the fire boss, with a radio and bullhorn. The identification on the Jeep's cowl is not readable in the photo, but is probably U.S. Forest Service or perhaps California Dept. of Forestry. 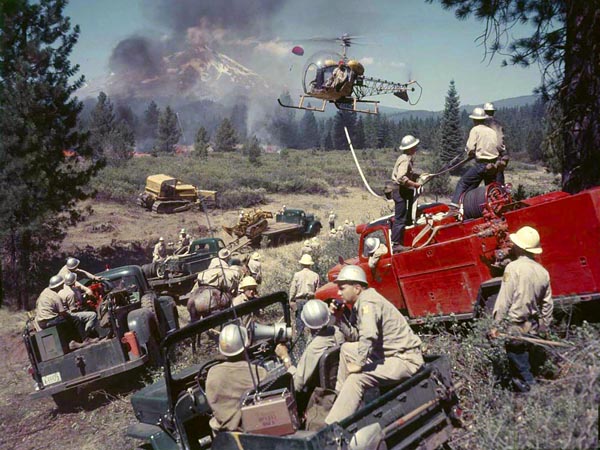 I later found a full color exposure taken at about the same time as the black & white, probably with a different camera loaded with color film stock. In fact there is a series of exposures in both color and black & white, and what is interesting is that the action remains virtually frozen -- the scene is obviously being posed for the cameras. It seems likely that even the fire was set for the purpose of taking the photo, with a scenic peak in the background.

Some of the shots, including this one, include parachutes being dropped near the fire. 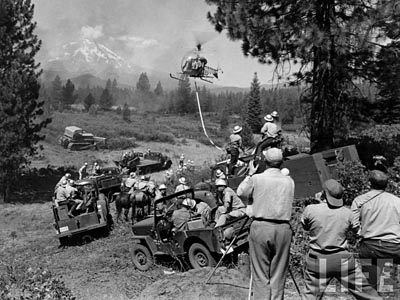 A wider view shows three additional cameramen, who perhaps were working with LIFE photographer J. R. Eyerman and taking some of the shots seen here, or perhaps for the Dept. of Forestry or some other client.

The helicopter pilot is doing a pretty good job of holding the same position. Helicopters had first been used in fighting wildfires in the U.S. in 1947, and although laying hose is maybe less exciting than rappelling fire crews, or water bombing, it might be much appreciated by crews on the ground. This experimental technique never became widely used however. 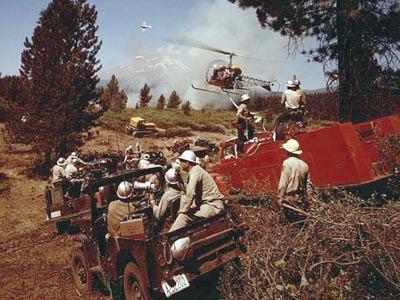 One color transparency, scanned backwards in the LIFE archive and restored to original direction here, has suffered significant fading of the cyan (greenish blue) emulsion, suggesting it was taken on a different film stock and camera. Possibly by the fellow with his baseball cap on backwards (above), who seems to be at about this angle.

This shot captures not only a white parachute in the background, but also a fixed-wing aircraft circling above it. What are they dropping by parachute? 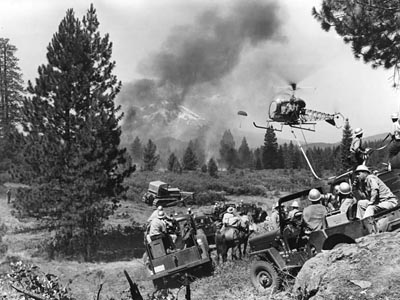 Another version, taken from a slightly lower angle by a different photographer, belongs to the Forest History Society in Durham NC. Their records identify this photo as being taken by Donald J. Lewis on 10 August 1955 in Shasta-Trinity National Forest, California, and describe it as a "specially staged photo showing fire equipment used in controlling fires."

Clearly when this much work went into staging the action, everybody sent a photographer to make sure they got a good picture of it.

Thanks to Federico Cavedo for spotting the photo. -- Derek Redmond

The LIFE photo archive of more than 10 million pictures was made available free for personal and research purposes, but copyright and ownership of all images remains with Time Inc.