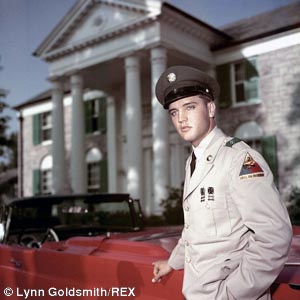 Elvis Presley returned to his Graceland mansion in Memphis, Tennessee in 1960, from his tour of duty in the U.S. Army, and proceeded to release three Number 1 records over the course of the year: "Stuck on You," "It's Now or Never" and "Are You Lonesome Tonight?". His first new movie was G.I. Blues, and perhaps his experience in the Army is also what inspired his purchase of a Jeep to use as a runabout on the grounds of Graceland.

That 1960 two-wheel-drive DJ-3A Surrey Gala is one of five vehicles represented in the Matchbox Collectibles 2001 series in 1/64 scale called "Elvis: The Graceland Collection." 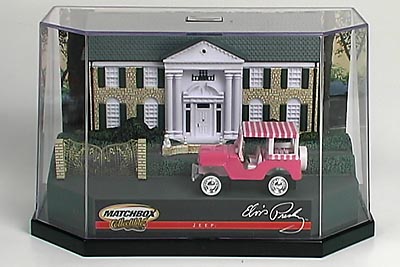 The collector card (60K JPEG) which comes with the toy inside its display case, includes a photo of the prototype Jeep and some information such as the original price of $1,812. The display itself is a nice piece of work, although Elvis fans who track down all five of the vehicles in the set will likely be disappointed to find the displays identical. They all feature the vehicle in front of a 3D plastic molding of the front of the house, and a detailed miniature reproduction of the front gates with their musical motif. 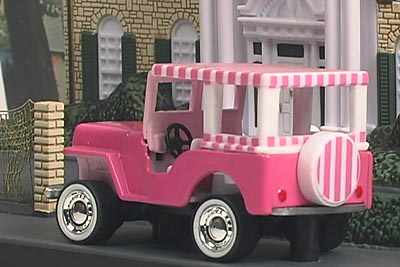 The Graceland Jeep is more than the return of the Matchbox flatfender, which had disappeared from the Mattel catalogue last year -- it's a complete revision. In addition to the replacement of the oversize tires and the addition of a new plastic top, the chassis and the casting itself have been modified significantly.

The shovels and grab handles have been removed from the sides of the tub, giving it a more prototypical appearance, and new bumpers have been added to each end of the base. The plastic base has also been lowered for the smaller wheels, and lettering on the base identifies it specifically as a "1960 Jeep" and reveals that it is made in China. (The 1970's made-in-England versions of this toy, with small wheels, used a metal base.) 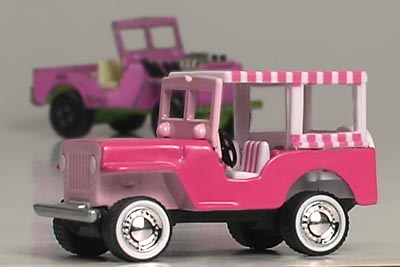 For the record, the pink is not the same as that used on the original 1971 Matchbox Jeep Hot Rod. The Surrey is painted in the correct two-tone Tropical Rose and Coral Mist paint scheme, and comparison of the toy with original Willys paint chips shows a very close match.

The only additional touches you might have wished for, would be improvements to the windshield, which is surprisingly unchanged from previous models. The center pillar could be eliminated, along with the blobs on the front, and the cutout in the top which was originally to support a gun barrel. 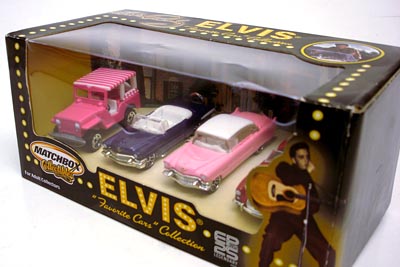 A Willys "W" painted in Tropical Rose on the hubcaps would have been nice, but I have to say these are some of the nicest wheels seen on a MBX Jeep in a long time.

Note that the Matchbox Collectibles "Elvis Favorite Car Collection" 4-car set (also distributed by Avon) includes a version of the Jeep without the two-tone paint scheme or the special whitewall wheels. (It also does not include the yellow Thunderbird.) 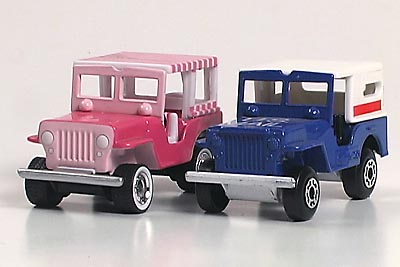 The front end has had a complete makeover. A line has been added defining the back of the hood, which makes the proportions look more correct, and the casting bump visible in the center of the hood on some recent editions (particularly on the 1997 gold "Challenge" series) has been completely eradicated. The MB-style grille has been replaced with a 7-slot grille which makes the high-hood CJ-3B heritage of the Matchbox more obvious than ever (see The Matchbox MB: Is It Really a CJ-3B?). It's a bit ironic, since in this case the Jeep is supposed to be a low-hood DJ-3A.

The headlights haven't regained the nice crosshatch detail which was apparently "lost" when the molds for this toy were sent from the UK to Macau around 1981. 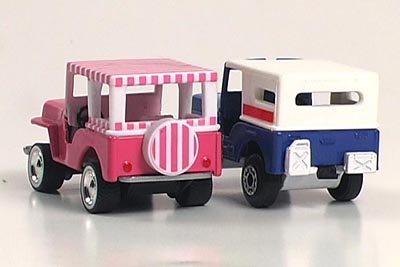 On the rear end, the perennial jerry cans and trailer hitch have been replaced by painted taillights and a hole for mounting a plastic spare tire (a first for this casting).

I've made some suggestions for new models using this casting, in The CJ3B Page Collection.

The Graceland Jeep was a nice collectible from Matchbox at a reasonable original price of about US$12. As of a few years later, they typically sell on eBay for twice that or more. As Elvis said, "It's Now or Never." -- Derek Redmond