Based on Jeeps from CJ3B.info 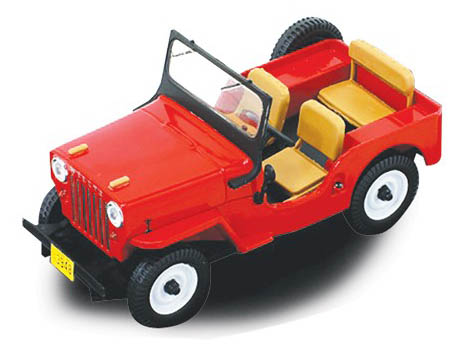 In early 2015 Fairfield Collectibles announced a 1:43 scale diecast CJ-3B, scheduled to be available in March. The production run is said to be "less than 500." From the photo it appears to be a pretty accurate model, with the exception of the top of the windshield frame and the early-CJ-2A rear seat. For the price of $59.99 you might expect a detailed engine compartment, but the model in the photo does not appear to have an opening hood.

The poorly researched blurb about the CJ-3B and Civilian Jeep history on the Fairfield website, says that this is the first diecast model of a CJ-3B, although it was actually preceded by the 2013 diecast CJ-3B from Colombia. 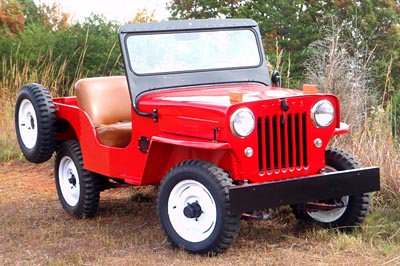 Since Fairfield has posted a fuzzy copy of this beautiful photo by Nick Tsigounis on their website, it appears the model was inspired by his 1963 Willys CJ-3B (serial no. 57348 94558) as seen on CJ3B.info. Nick purchased it in 2005 and did a major restoration which he documented for us in New Life For an Old Dog. 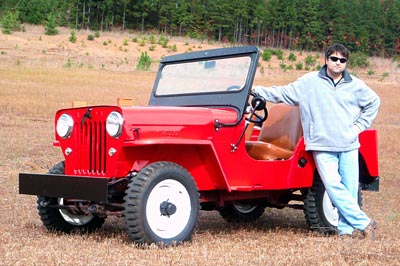 The natural-finish wood blocks on the hood and the bright red finish of the Fairfield model are further clues that Nick's Jeep was the inspiration. He chose a PPG "Flame Red" paint for his restoration, which is noticeably brighter than its original President Red, a color used by Willys for many years.

Nick's '63 does not have a back seat installed, which possibly accounts for the incorrect style of seat used on the little 3-1/2-inch model. This makes it a nice representation of a restored Jeep but not a totally accurate reproduction of a Willys CJ-3B. 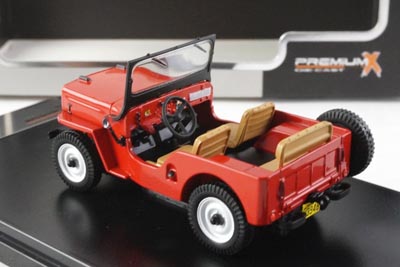 The Fairfield CJ-3B in fact appears to be the same 1/43 model released by IXO Models in their Premium X line from China in January 2015. And the Premium X CJ-3B seems to have sold well, as it is no longer listed in the Premium X web store. Apparently it sold mainly to Fairfield, but is also frequently offered on eBay, typically for $45. 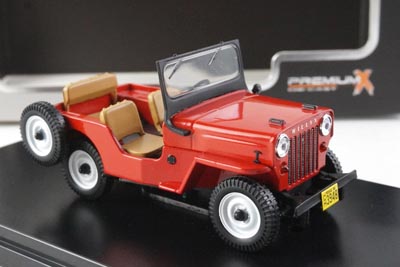 The model includes 1953 Chambers County, Texas license plates (see a front view photo, 70K JPEG). It is referred to by Premium X as a "1953 Willys CJ-3B" despite the presence of the black fresh air vent cover on the right side of the cowl, again probably based on Nick's '63. 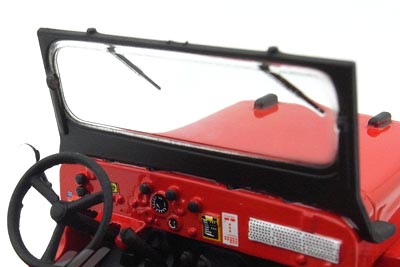 However, a close look at the dashboard reveals that it is the pre-1957, five-gauge layout. So clearly the dash was not based on Nick's '63, and it once again makes the model less than accurate to any particular model year. The attempt to reproduce the Willys dash plate (80K JPEG) is also not very successful.

And it's odd that the front grilles of these Premium X models are stamped "WILLYX"!) 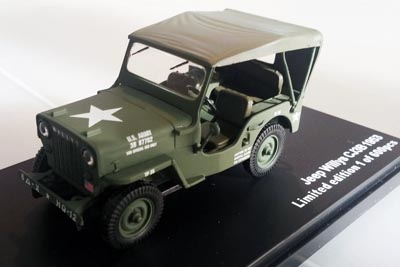 IXO did a U.S. Army version of the CJ-3B, sold under the "Triple 9 Collection" brand. It's reasonably accurate to the batch of 1964 3B's purchased by the Army, although the hood number is not correct so it's probably not based on U.S. Army 1M 0599.

It is mounted on a base labelled "Limited edition 1 of 600 pcs" and as of early 2015 I have only seen it for sale from China. 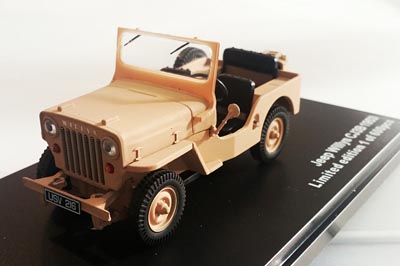 Best of all, the "Triple 9 Collection" also includes a CJ-3B in sand beige finish. This one has four hood latches, and UK license plate "USV 216" (see also a rear view photo, 50K JPEG.) It took only a moment to realize the prototype this one is based on. 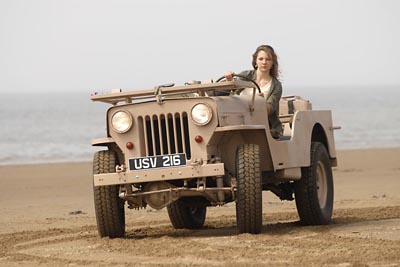 The license plate confirms that this is John Carroll's "Beer Truck" as seen in this photo from the cover of CJ3B.info in 2007, and in The Worst Car in the World? on TV's Top Gear. The Beer Truck is actually a Mahindra long-wheelbase chassis and body, with various Willys, VIASA and Hotchkiss parts added.

Although Ixo did add the extra hood latches to their 1/43 model, they didn't move the spare from the right side to the tailgate as on the Beer Truck (100K JPEG).

John told CJ3B.info, "I'm flattered that people like the truck so much. I was going to sell it to fund other projects but now Top Gear have borrowed it for their video, a Bollywood company used it for a film (in Wales) and there's a model of it, I couldn't part with it. To think we only built it because, after a few beers, we reckoned it was too good to scrap for parts."

The red CJ-3B is not the only Jeep in the Fairfield Collectibles catalogue as of 2015, so presumably they know their market and pricing. This "WWII Jeep And Utility Trailer" in 1:32 scale sells for $80. 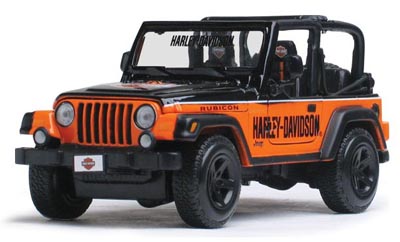 Their "Harley-Davidson Jeep Wrangler" on the other hand (manufactured by Maisto in an orange version and a green version) is 1:24 with a semi-detailed engine compartment and detailed interior (60K JPEG) but sells for only $35.