Mickey Mouse and the Willys Jeep are two of the most famous images of American culture, and because of that they are also extremely valuable. Copyright holders and toy manufacturers both make big profits from merchandise featuring famous images. So toy Jeeps with Mickey or other Walt Disney characters attached, have long been a popular combination.

The original Matchbox small diecast "MM" Mickey Mouse Jeep seen on the right, was part of the Disney Series #5 and 6, Lesney 1979. 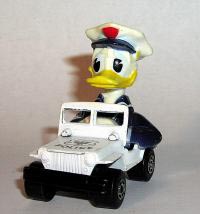 The Matchbox "Officer Donald" in a Police Jeep was also in Disney Series #5 and 6, Lesney 1979.

An unidentified four-inch-long plastic Donald Duck Willys (20K JPEG) is notable for having the Willys name molded almost prototypically on the hood. 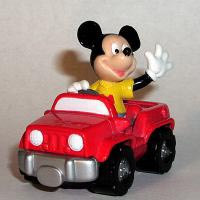 This is a more recent Disney Jeep with Mickey Mouse, part of what Business Week magazine called a "Mickey marketing blitz" in 2000-2001 after Disney merchandising earnings dropped during 1998-99. Called "4 wheelin' Mickey", it's Fisher-Price #91438. It has a metal body, and a plastic base labelled "Mattel" copyright 2000. 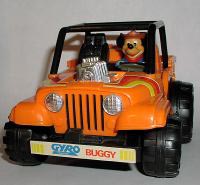 The "Gyro Buggy" Mickey Jeep has an offical Disney sticker on the spare tire. It is plastic and approximately 6 inches long. The drive may have been windup, since there is what appears a key inserted in the bottom. The motor rocks when the rear wheel move, and there is an engine sound. It has an "ILLCO" trademark on the bottom and says "Made in Thailand". See the front and back of the original packaging (30K JPEGs.) 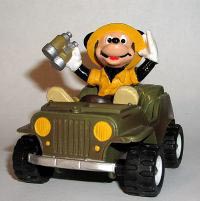 This is the West German-made Bully Jeep with Mickey on safari. It is approximately 3 1/4 inches long and made of hard rubber, except for the axles and wheels. Details are painted on. 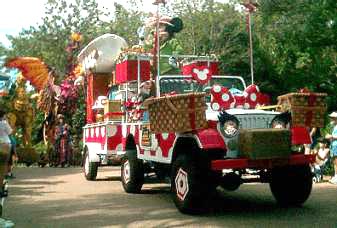 In the daily Jammin' Jungle Parade at Disney's Animal Kingdom in Florida as of 2003, Donald Duck rides in a Land Cruiser, but Minnie Mouse's Jeep is the real thing. "With all the sights and sounds of an outrageous island street party..." says the advertising blurb, "Minnie's jeep and float are painted with her signature red and white polka dots adorned with a big red and white, polka dot bow." 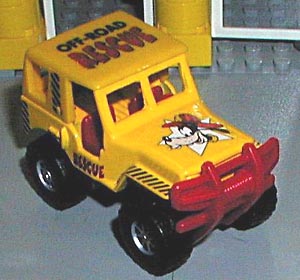 The Goofy Rescue Jeep is another example of a Jeep featuring the Disney character painted on the vehicle rather than riding in it. This small diecast, which was sold in a mutli-pack "Rescue" set at the Disney Store, is the Maisto "Ford GP" casting that is now distributed by Tonka. 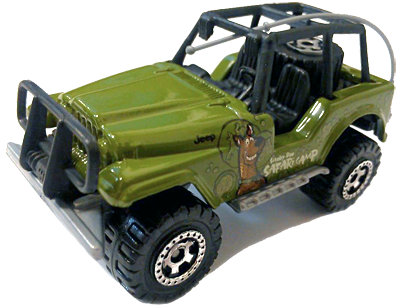 Matchbox did a 5-pack based on Scooby Doo (110K JPEG) in 2008, including a "Safari" version of their 1/64 CJ-5 which actually had a basis in an episode of the show. (Jeeps frequently appeared in the series.)

Equity Toys included figures of the character "Shaggy" and the Great Dane "Scooby" in a circa-2000 radio-controlled toy YJ (160K JPEG). 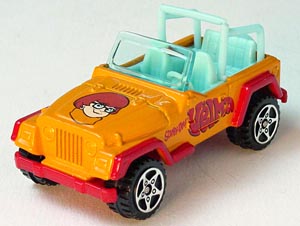 And a TJ dedicated to the character "Velma" is included in a Scooby 5-pack from Racing Champions, circa 2000.

Characters from lots of other well-known cartoons have also made appearances on toy Jeeps. 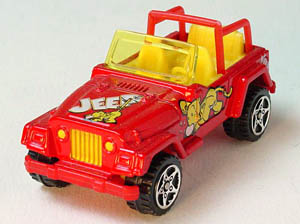 A "Eugene the Jeep" version of the small (approximately 1:60) diecast Racing Champions TJ is a great idea; it comes from a Popeye 5-pack (140K JPEG) which includes four non-Jeep vehicles. 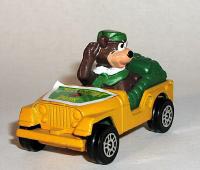 The Yogi Bear Jeep from Corgi, #82 (1981) is also a small diecast (see the bubble pack, 90K JPEG.) Like Eugene the Jeep, and Beetle Bailey (below), Yogi actually has a strong Jeep connection, since his friend Ranger John Smith's Jeep (30K JPEG) was seen in many episodes of the TV show. 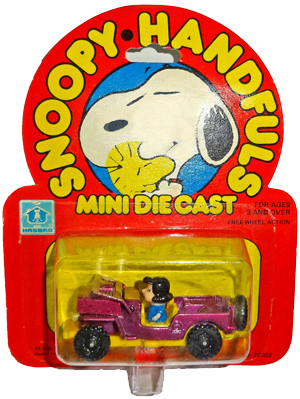 "Lucy" from Peanuts in a high-hood CJ-3B Jeep was one of over 30 small diecast vehicles driven by Peanuts characters, manufactured by Hasbro.

They were originally released under the "Aviva" name and also sold by Hallmark, circa mid-1970s. They were re-released by Hasbro in circa the 1980s as "Snoopy Handfuls". See more on this Peanuts Jeep on CJ3B.info. 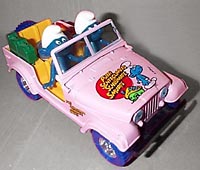 If there's anybody you'd think you'd be even less likely to see in a Jeep than Lucy, it might be the Smurfs. But here they are. This is a Burago 1:24 model, also available with Tom and Jerry in the front seat (30K JPEG.) 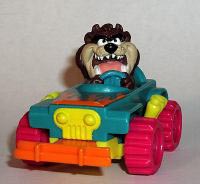 Taz also appears on a yellow Jeep Liberty (25K JPEG) released by Matchbox in 2003, along with Bugs Bunny and other characters from Looney Tunes. 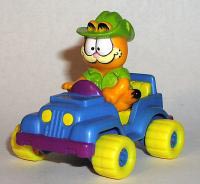 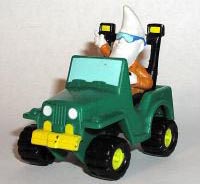 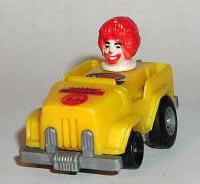 McDonald's Restaurants gave away the Garfield Jeep (A17) with kiddie meals in 1988; a similar Jeep had Gonzo from Sesame Street (10K JPEG) in the driver's seat. McDonald's have also given away their advertising characters in slightly different Jeeps: Mac At Night (1988) and Ronald McDonald (1984). 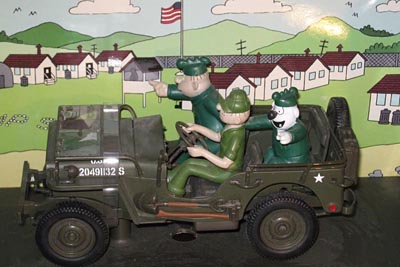 The Gate Beetle Bailey in 1:18 scale is an accurate MB model with the figures of Beetle and Sarge added. Gate later released the same toy in 1:32 scale in 2001. 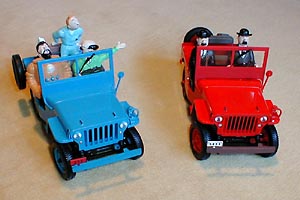 HAPAX took a similar approach with their 1:18 MB and CJ-2A models featuring characters from the "Tintin" comic novels, originally published in French and now available around the world. The accurate representation of Jeeps was a notable feature of the Tintin books, including cover appearances on Destination Moon (80K JPEG) and Land of Black Gold (80K JPEG).

Atlas Editions has a series of 1/43-scale Tintin vehicles including the Black Gold Jeep (20K JPEG) and a Willys Fire Truck.

Elsewhere on the web, see more in French about Tintin et la Jeep. 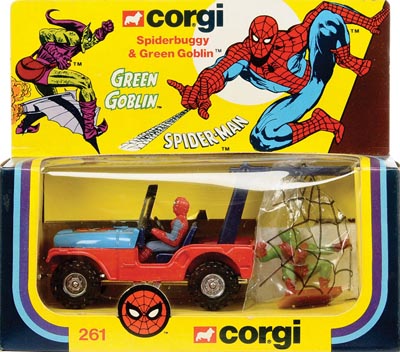 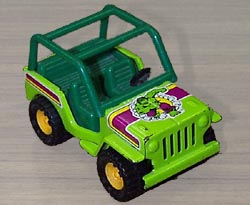 The Incredible Hulk appears on one of the many versions of the Buddy L pressed steel Jeep, about 4 inches long. This was part of an Incredible Hulk vehicle set including a truck and motorcycle, from the early 1980's. 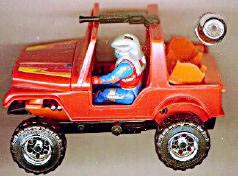 Also from the eighties: the MASK Jeep from Kenner. MASK (Mobile Armored Strike Kommand) began as a TV series and toy series, and was soon followed by the comic books. See also a front view photo of the MASK Jeep, driven by Dusty Hayes in his "backlash mask." 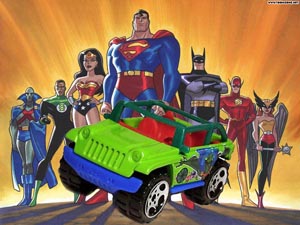 Manhunter Martian from the Justice League of America appears on a Jeep Willys concept vehicle which is part of a Matchbox 2003 small diecast series.

Thanks to Mike for most of the photos, and also to Jarek Skonieczny, J-L Martin, Randy Brown and Bob Keniston. -- Derek Redmond

Note: This page is in no way endorsed by the Walt Disney Corporation, Warner Brothers Studios, or other rights holders. All cartoon characters displayed on this page are property of their respective creators.