Lucy, of the "Peanuts" comic strip, driving a Jeep. It's clearly a high-hood CJ-3B, which suggested to me that it could date from the mid 1950s. The purple Jeep, approximately 1/64 scale, carries a United Features Syndicate copyright date of 1952, but this appears to refer to copyright on the Peanuts character rather than on the toy itself.

Peanuts was first published in 1950, but Lucy Van Pelt and her brother Linus were introduced to the strip in 1952, and Peanuts began its rise to national prominence just as the Willys Jeep CJ-3B also entered its heyday. Peanuts creator Charles Schulz was first awarded the National Cartoonists Society cartoonist of the year award in 1955.

The toy had a folding windshield, and an opening hood with a chromed engine inside. Initially released under the Aviva name (owned by Hasbro, maker of GI Joe), it was part of a significant industry based on the merchandising of Peanuts. It was apparently also sold by Hallmark, the greeting card company which held the rights to many Peanuts products. 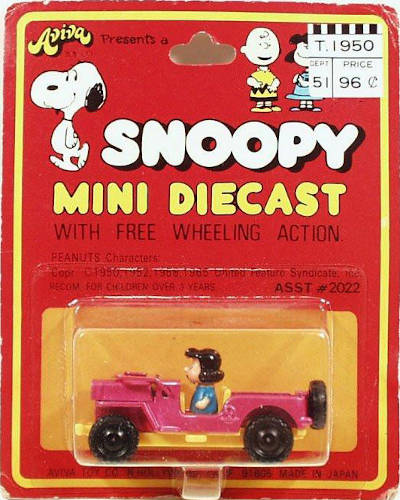 Peanuts collectors date this toy as mid-1970s to early 80s. This is supported by the name on the bubble-pack cards from Aviva and from the later Hasbro editions, which are labelled as "Snoopy Mini Diecast" or "Snoopy Handfuls." By the 70s Snoopy the beagle had become by far the most popular part of the Peanuts franchise. 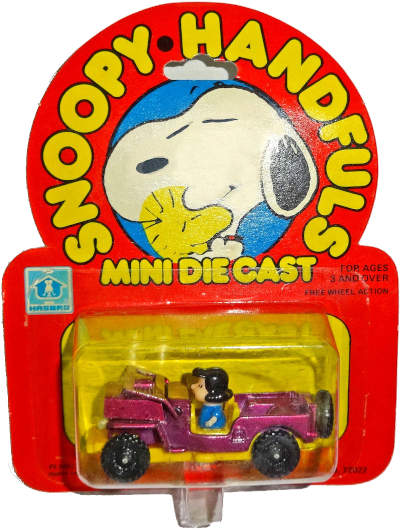 By the early 1980s the packaging was rebranded with the Hasbro name. Snoopy's feathered friend Woodstock also appeared on the "Snoopy Handfuls" cards from Hasbro.

There was an extensive series of different small diecast vehicles with the Peanuts characters in them, shown on the reverse side of the card (350K JPEG)

Peanuts creator Charles Schulz died, and the comic strip ceased daily publication, in 2000. The massive merchandising industry seems likely to continue for many years (see Wikipedia). However, as far as I know, this unique Hasbro 1/64 CJ-3B casting has not appeared in any other version before or since.


Thanks to Jarek Skonieczny for the photos. -- Derek Redmond

Last updated 8 May 2021 by Derek Redmond redmond@cj3b.info
https://cj3b.info/Toys/Peanuts.html
All content not credited and previously copyright, is copyright Derek Redmond