Here are some photos of a solution for that age old problem: how to carry 1000 pounds of coffee beans and bananas to market and still retain a spare tire and extra fuel for sorties into the desert. Where there's a will and a welder there is a way. 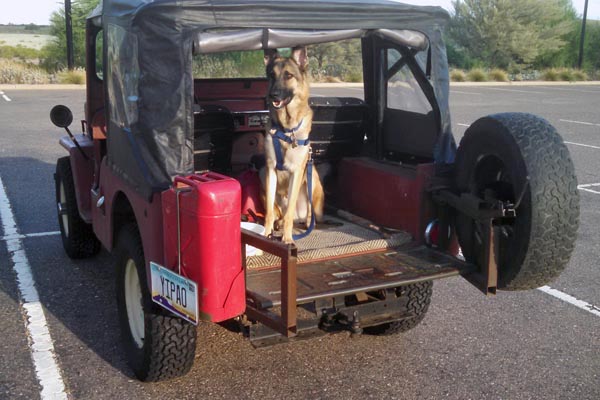 Charlie my rescued German Shepherd displays the "Yipao tailgate system" on my 1954 CJ-3B. This miracle of engineering is made possible by the reuse of old universal joint bearings. This proof of concept model has held up to several seasons of Arizona style off-roading and the dog loves it too.

One of these days I'll get around to finishing my rusty Willys tailgate and painting the Jeep, but the Arizona sun and sagebrush are hard on paint jobs.

I have always liked the looks of the traditional Jeep body-side spare tire mounts, but the trails here are narrow and the tire would get hooked on juniper trees and sage brush. Besides that I needed a place for a jerry can. I spent a lot of time thinking about this design and thought a center-opening gate would reduce loads on the body mounts. I found that old universal joint bearings (100K JPEG) cut and welded to the mounts, were strong enough to carry the load. The gate swings open effortlessly and is stronger than I imagined. The Jeep can be driven with the gate locked open but I only do this off road since I would need to mount some auxiliary tail lights. It's great for hunting trips or carrying 1000 lbs of coffee beans. 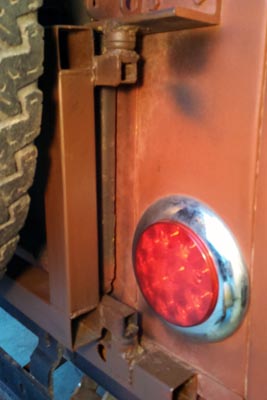 I switched to low-profile taillights to allow for clearance to open the gates. The upper mounts are heavy angle iron mounted with 3/8" grade 8 bolts. The upper body is reinforced inside (100K JPEG) with 1/8" metal stock inside the wheel well, just below the rear fender. There were two factory indentations in my body there for handles or some other jeep accessory so I drilled those out and used them. The universal joint bearing cap is welded to this angle iron. 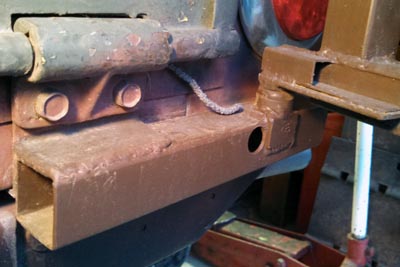 The lower mount is thin-walled square tubing reinforced with angle iron and mounted to the body and the Jeep tailgate hinge holes. Lower body reinforcements are the same as the top with 1/8" stock spot welded along the rear lower edge inside the wheel well. A bearing cap is also welded to this mount. 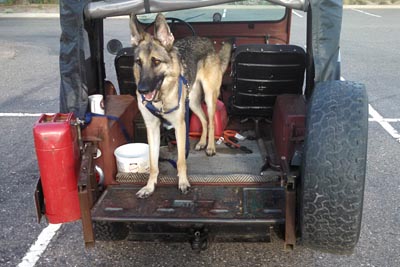 The gate frame is made out of thin-walled square tubing and was welded up as a complete assembly. This allowed me to mount the gate as one piece which made alignment much easier. Then I cut it down the center with my angle grinder cutoff wheel and Viola I had two gates. They swung wide open and I was really impressed with how smooth and strong the bearings are. When the gate is open the tailgate tabs rest in two slots I cut in the lower gate section. The gates will open a full 90 degrees and someday I may make a locking system for this but currently it locks open with the tailgate tabs. 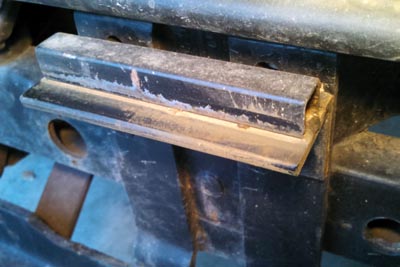 I made a lower center rest and bump stop out of angle iron, to help carry loads when it is closed. This mounts to the upper portion of the rear frame and I may add a locking device to it someday, but so far the upper latch keeps it tightly closed (120K JPEG) for normal driving. 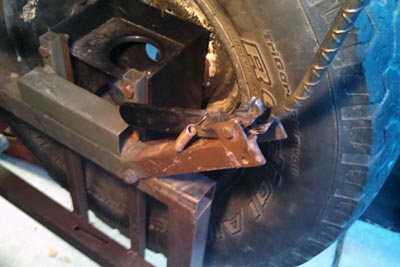 The upper locking latch is some angle iron welded together and a rudimentary locking system. A lot of ideas will work here. All of the materials came from the scrap yard and junk I had laying around. 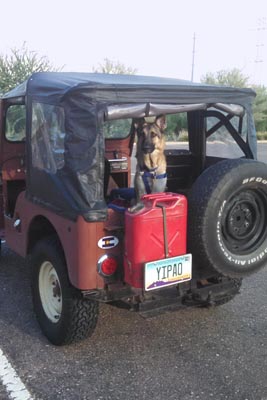 I encourage Jeep owners to get a small welder and practice their skills. It's not too hard to learn, and this project has really improved the utility of my Jeep if that's possible. Restoring my CJ-3B has given me the confidence to start building an airplane so I hope the Jeep doesn't suffer too much from lack of attention!

By the way, the engine in my '54 is the F-head from Eric Lawson's Rebuilding an F-head Engine on CJ3B.info, and is purring like a kitten.

And the best part of the story is that I found Charlie while driving my Jeep. He was wandering lost in the desert. I was able to rescue him and give him a good home, and now he really loves Jeep rides. -- Stuart

Thanks to Stuart for this look at his project. See photos of his Jeep on the trails in Arizona, and details on his "Yipao" license plates, in 1954 CJ-3B Owners and Photos. -- Derek Redmond