Jeff was looking for advice about adding oil to the transmission and transfer case in his Jeep. "I'm not too smart yet with the T-90 and the Dana 18. Where do I add more fluid into them? Do they connect together and share the same fluid, or do I need to fill them separately? Can someone tell me where fill these, how much to add and any other tips?"

Bob provided the following information: "I believe that they share the same fluids, but each have a drain and fill hole. There is a plug on the side of each to fill them. Also, do yourself a favor and find a suction tube to do the work. I bought one for $9 here in the states; it makes the job much easier, plus you won't have 90-weight gear oil running down your arm."

Don agreed: "They do have a hole between them, but it is small and should not be counted on to fill both units at the same time. Fill one, then the other one and then check them again. Fill both until the 90-weight oil is level with the bottom of the opening. Here are some links to some of the technical information on this site; this will get you started.

"If you don't know the history of this unit, I'd replace all of the fluids before driving it. The drain plugs are on the bottom. It can get a bit messy, but $20 worth of fluid is better than a transmission or transfer case rebuild because you drove it while it had water in it."

"In the exploded view of the transmission, the filler plug is part #29.

"In the exploded view of the transfer case, the filler plug is part #39."

Stan Peterson: "There's a hole in the bottom of the bell housing that leaks transmisson oil continuously. I was told that this was due to the felt transmisson seal. Do all stock CJ-3Bs do this?"

Tony Morreale: "My 3A does the same thing even with a new T-90, but are you sure it's transmission oil? Mine also leaked engine oil from a bad rear engine seal until I got that repaired."

Tom Edwards: "Yes, They will leak gear oil out that hole with a bad felt seal (T90's input shaft seal) after the engine is or had been running. I had a 2A with no seal, and leaked a 3-4" puddle. This is a problem that should be addressed, during a clutch or T90 job. Because it will soak a new clutch disk. Or like Tony said it may be the engine's rear seal. I have found there is more than one type of felt seal. The better felt seals have two or three layers of rubber with felt in between. If you have only a felt seal, you could add some thin flat rubber washers that just fit, for a no-leak seal. This 2A no longer leaks oil from the bell housing... now it leaks around the output shafts. Which I plan to fix this week."

Vern: "The leak you described is very common. It could be from either the engine rear main seal or the front of the T90. (Dip your finger in the puddle and take a whiff. Gear lube usually has a sulfur smell to it.) There should be an oval shaped access plate on the top of your bellhousing. You will need to remove the sheetmetal shroud around the base of the T90. I'm not positive, but I think you can see from there if the leak is coming from the front of the transmission. If it is leaking from the engine, the front of the flywheel should have oil on it. You may be able to see with a small inspection mirror from there, or by pulling the starter. On my 2A, the front seal on the T90 was simply a flat cork washer. It was split in two and leaked profusely." 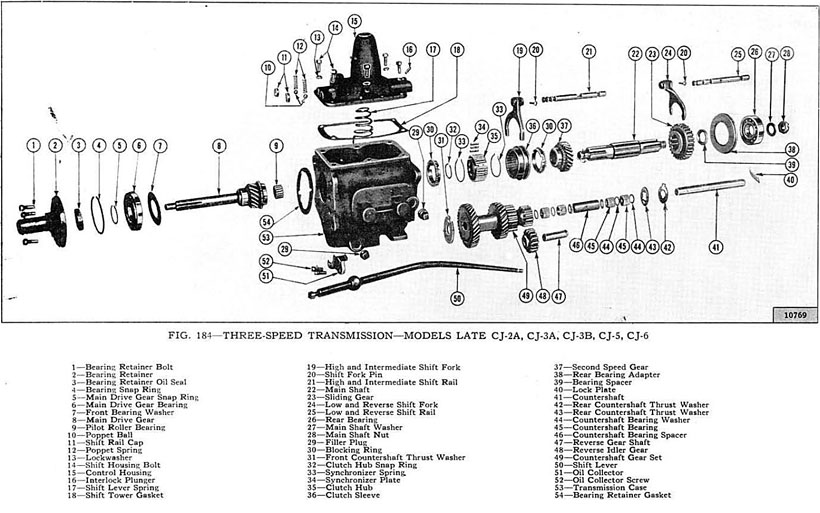 David L. Rust: "Has anyone been bothered with the tranny cover leaking oil out of the back end of the shifting fork shaft bores?? What did you do to fix it? I was thinking of brazing a steel cap on the end of each, but I wonder if this will make it hard to shift due to liquid lock. Any ideas? Also I have a nagging seep at the shift arm retaing pin up on the 'tower' of the cover. I tried to dab RTV gasket goop on it but it did not work. I think I'll braze that also."

Eric Lawson: "The shift rod hole plugs that just press into place are usually missing. The shift rods wear, or the bores in the cast iron wear and allow oil to collect between the shift rod and the pressed into place hole plugs. When you shift, the hydraulic pressure pops the plugs out. If you secure the plugs into place, the transmission becomes very difficult to shift.

"Once the plugs pop out, you have a leak that 'can't be found.' If you prefer a clean floor to an original transmission cover, find a cover that fit onto a military T90. The military units have screwed-into-place pipe plugs, and holes to drain the oil from the shift rod bores back into the transmission."

Jim Sammons: "I once pulled a T90 out of an old CJ-2A that had the shifter cover drilled and tapped on both ends between the shifter rods and had a plate bolted on in front of the dust plugs to keep them in. Thought someone might want to know this rather quick and ingenious fix."

John Hubbard: "Later model T90's have rail caps at both ends. You can use a T86 cover which has rail caps at both ends if you change out the shifting forks. If you have an earlier model T90 and want to put caps on the rear shift rails you need to carve a notch in the shift rail hole to prevent pressure from building up (as you describe) and pushing past your new seal. I followed the following procedure:

"The tranny builds up pressure and fluid tries to escape wherever it can. Once I fixed the leak from the rear of the shift rails, fluid started to come out of the top of the cover (where the cane comes out)."

Butch asked: "I'm leaking oil from where my countershaft comes through the front of my T-90 transmission. Does anyone have any ideas on how to seal it up without tearing the countershaft out? Maybe some kind of epoxy putty on the outside?"

Glenn Smith suggested: "Try to determine why it leaks around the shaft. My transfer case leaks around where the intermediate shaft goes through it, and I discovered that the case is actually worn and allows the shaft to move up and down. I guess it is machine shop time, I hope it can be bored out and bushings installed in both sides. Shafts moving ever so slightly would have to be murder on bearings and gears."

Jeff discovered a product that claimed to stop leaks and wondered if it was worth it to try. "I found the following site: New Tech International promotes 'SealLube' which they maintain will stop all leaks. Now, with the puddle under my Jeep getting bigger and bigger over the past few months, I'm thinking that it is worth a shot. It has to beat pulling the transmission and transfer case. Any thoughts?"

Jed responded: "My puddle grew and grew, too, and it turned out to be the rear shaft seal. Before you use any goop, check those front and rear seals. You do not have to remove the transmission or transfer case if the seals are bad."

Ed Wilson also recommended looking for the source of the leak. "In my experience, about 30 Jeep years, the output shaft seals on the transfer case and the pinion seal in either front or rear differential will cause the greater number of your oil leaks. If you use 2-wheel drive most of the time, check the rear output shaft and pinion seals first. As Jed indicated, these are serviceable with a lift and require only removing the drive shaft and the yoke. They are available from most parts stores.

"If you are not familiar with the term pinion, this is the shaft that comes out of the axle and connects to the drive shafts. I've replaced dozens of these seals and you can take them out anyway you want, but be sure to put the new ones in so that they seat evenly. I use a socket that fits the diameter and hammer with a little lube on the edges."

Bob W. warned: "The leak stop fluids that I have seen stop the leaks by softening and expanding the rubber seals. It softens and expands all of the seals, not just the leaking one. Soft seals wear faster, possibly causing more leaks after the initial leak slowdown. I would consider this a temporary repair only. I have also seen leather seals on early vehicles and don't know if the sealer will even work on leather seals." 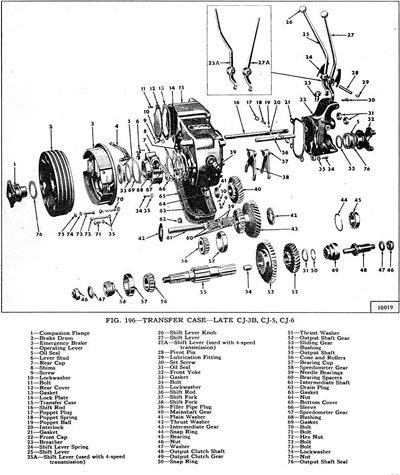 Q: "I have a 1951 Willys with a T-90 trans and Spicer 18 transfer case. The output shaft area seems to leak a lot of oil from the transfer case. It gets my parking brake drum all oily and a puddle develops on the ground. I took it apart, cleaned it and put silicone around the shaft and other areas, but it leaks just as bad -- what's wrong? Is the seal hard to replace, and where do you buy a seal? I took the silicone idea from this web page, but it did not work for me. I can see the leak coming from the inside of the parking brake drum. It seems to leak mostly after I have driven the Jeep."

John Beshears: "The seal is not difficult to replace, but you will need a seal puller. The seal is available pretty much everywhere. I got mine at Quadratech. Also look at the yoke when you have it off -- they become scored and that may be contributing to your problem."

Reed Cary: "Just thought I'd add that in case of the yoke surface being a problem there are sleeves available (the name "Readi-Sleeve" comes to mind) which are made of stainless steel, slip over the worn area, and restore a sealing surface."

Q: "OK, I have the new front and rear output shaft oil seals (metal with rubber in the middle) and some felt and paper gaskets in a kit I bought. In what order do they go into the transfer case? Also I do not have tools to take out the old oil seals -- is there a trick to doing it without the tool? The shaft is a little in the way. I suppose I can use a piece of pipe to drive the new ones in, but how do I take them out? Also, I did not see any felt when I took the yoke off -- why? Is this why my TC was leaking?"

Rus: "A good rental store will have a puller available to get the seal out. I will admit, at a younger age I used a horrible technique of driving a sharp screwdriver into the metal face of the seal and then used the screwdriver to "leverage" it out. Use the puller. The repair manual exploded view plus some parts catalogue illustrations show the paper gasket in first, followed by the rubber seal. The felt seal, which I believe handles small seepage, fits up in the yoke (front) and the drive flange (rear). I highly recommend obtaining a repair manual for your Jeep if you're going to work on it. You'd be surprised at the amount of information they have."

Thanks to all the contributors, and Doug Hoffman for editing. -- Derek Redmond