How to Identify Which Front Axle You Have 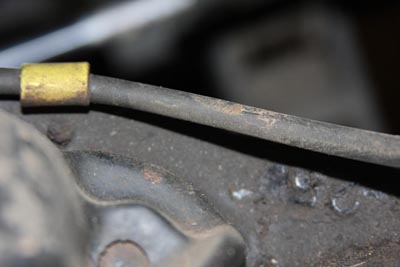 Duffer: Yes, the 25 covers are vented, but since the covers have the same bolt pattern, they can get swapped. A better ID will be the model number cast into the rear side of the upper right web. Not a very good photo, but the "25" is clearly visible. 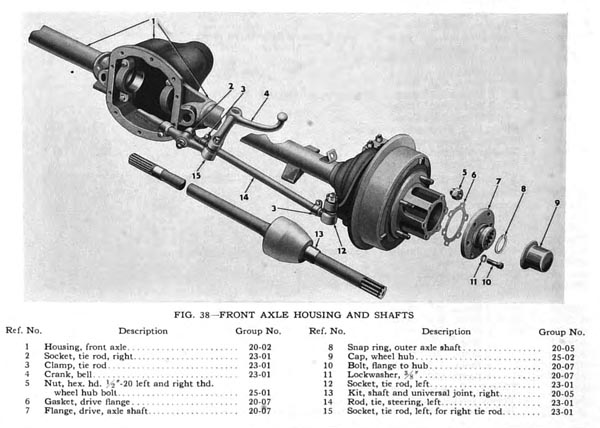 This illustration from the 1956 Willys CJ-3B Parts List shows a front axle with a Rzeppa universal joint. Later model CJ-3Bs are likely to have a Cardan Cross (Spicer) U-joint.

For more on the different types of axle U-joints (220K JPEG) inside the steering knuckle, and their requirements for lubrication, see Lubricating the Steering Knuckles on CJ3B.info.

Scott Blystone: "I have been fighting with replacement of a broken front left axle (Bendix CV joint). The replacement (Cardan Spicer joint) from Omix-Ada via Krage Motorsports just barely fit in the knuckle, but the spindle would not seat tightly. I took out the bronze thrust bushing on the inside of the knuckle, tore into the diff to make sure spider gears were OK and ground most of the spindle bushing flange away. Still too tight when bolted together -- the axle would not turn. "Krage finally sent me another new axle -- boy, are the two different. The first axle had poorly machined splines, the inboard side of the knuckle joint was not machined, the length wasn't correct, the center joint had no relief hole for grease filling, etc. The new one is much stouter and is an accurate copy of the original with regard to length, splines and diameter/spacing of the u-joint. Slipped right in. Now I just have to replace the spindle bushings that I ground off and I'll be ready to reassemble.

"I want to thank Krage Motorsports for bearing with me, answering questions and in the end losing a lot of $$ to make it right with me. Finally I asked Krage about the difference in the two axle suppliers. The first one came from Omix and John Krage said they have had all kinds of problems with fit. The second (good) axle came to him from Crown auto. So beware if you need to make this swap -- I urge you to specify whose axle you want to buy. I spent a lot of cold nights working on the Jeep trying to figure out what was wrong and even more nights shoveling since this CJ serves duty as a snowplow in the winter months. Buyer beware."

Factory photo from the Images in Time collection at the Toledo Lucas County Public Library -- see also Working at the Overland on CJ3B.info. Diagrams from the Factory Service Manual, which is essential to most serious mechanical work on a Jeep. Lock-Right photo from Powertrax Lock-Right Locker Installation and Review.