It's not too often that engines other than racing engines get a chance to demonstrate their power and torque on a dynamometer. But the 1959 document seen below shows the results of a test on the Willys F4-134 Hurricane engine. A dyno test puts a controlled load on an engine, measures the torque exerted at different RPM speeds, and then calculates the horsepower. The resulting graph plots both horsepower and torque against the RPM's at which the engine was running.

Horsepower is a measure of how much weight an engine can move, and how quickly. Useful, for example, when passing on the highway. Torque is a more specific measure of ability to turn the crankshaft, measured in "pound-feet." (Imagine for comparison, how many pounds of force required on a 1-foot lug wrench, to turn a wheel nut.) This is important in low-speed and off-road driving. In the metric system, torque can be measured in "Newton-meters."

This graph indicates that available torque can drop off well before the engine has reached its maximum RPM or horsepower.

The graph shows that, in fact, although horsepower continues to increase as RPM's increase (at least up to 4000 RPM), the actual torque available begins to drop off after about 2100 RPM. At that point, the horsepower output of the engine is only about 45 HP. We can be assured of the accuracy of this graph, since it is signed by Willys' Chief Engineer George C. Harbert, and notarized by a notary public, on 4 December 1959!

The 4-Wheeler's Bible, Jim Allen's invaluable reference book for off-road technique, tools and specs, gives this summary of how to evaluate how much torque you need: "How much is adequate? It's all related to engine torque versus the weight of the vehicle. If you take the rated engine torque and divide it into the curb weight, you will get the torque-to-weight ratio. Anything much over 20:1 is generally inadequate. The upper teens are acceptable, the middle teens are good, the lower teens are great, and under 10:1 is probably overkill." 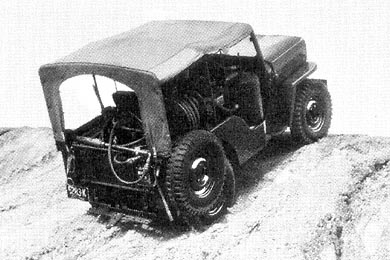 Well, dividing the Hurricane's maximum 111 foot-pounds of gross torque into the CJ-3B's curb weight of 2243 pounds, gives a a result of almost exactly 20:1, which by today's standards can be considered just adequate. Of course, other factors in the drivetrain of the Jeep, including the transfer case, low-geared axles, and tires chosen to provide traction, are designed specifically to translate that torque effectively into slow forward progress.

The net torque and horsepower available from the engine are also shown on the graph, and are a bit lower because they are adjusted for the load of things attached to the engine such as the fan belt.


Note that a 1962 graph (below) signed by new Chief Engineer A.C. Sampietro shows slightly better performance. It is dated once again 4 December, but this copy has not actually been signed by a notary public!

Keith Buckley has seen a number of this type of document, and notes that "Not all dyno tests were notarized. The ones that were notarized were for advertising claims or contract requirements, or patents. And I've seen experimental reports that were prepared for Ft. Belvoir where the test results were notarized."

Thanks to Keith and to Jim Allen and Vaughn Becker. -- Derek Redmond

See more details on the Willys advertising photo above, showing a Universal Jeep and Compressor.