Tracks in the Woods 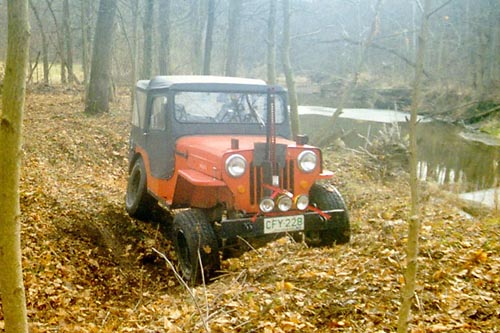 Jon says: "This photo below the 3B getting the axles all crossed up crossing a rut that cuts across the trail. The left rear tire was drooping at least as far as the right front, with about a 6 or 8 inch gap between the top of the tire and the wheel well.

Removal of the clips, that (are supposed to) keep the leafs from fanning out, improves front articulation. Rear clips have yet to be removed, but long, heavy shackles without any center bracing seem to help the rear articulate. Right rear leaf spring had a severe negative arch, and we fully expected it to break, but it lives on." 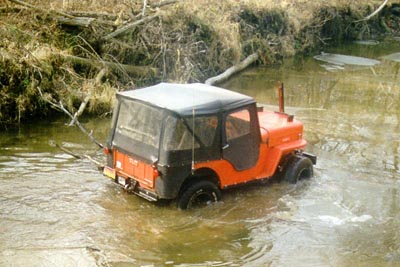 "Going for a swim is fun! The layer of ice is broken up and mostly not showing in the photo. At one point, the exhaust was submerged and gurgling like an outboard motor boat. Steering knuckles, locking hubs, tranny, t-case and master cylinder all seemed to survive the plunge with no water intrusion. Both differentials took on water and needed to be flushed out with kerosene."

See Tips on Lubricating Your Jeep for more details on this. 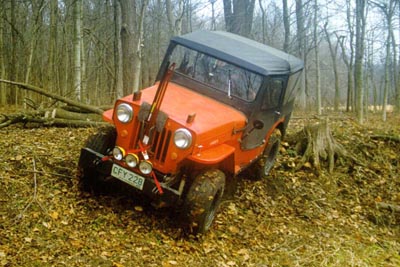 "As I passed the stump, the rear end slid down hill a bit. Fear of rolling had diminished at this point in the day, as it had been at steeper angles during the day. I think is probably ok up to 40 or 45 degrees, but I can never bring myself to look down at the inclinometer anytime it's past 30. If it ever rolls, I'll try to look so I'll know better next time!" 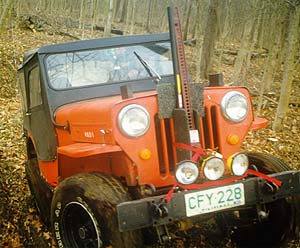 "The Hi-Lift Jack has yet to be used for official Jeep business, but it came in handy pulling a tree away from the garage as I cut it down. Hey, the Jeep was in the garage and needed to be protected from the tree. The jack now resides on custom mounts on the back, below the tail lights. In the photo, it's resting in a basket designed to hold two 50 cal. military ammo boxes for tools. Carpet was placed between the hood and grill and the jack, to protect the fine finish." 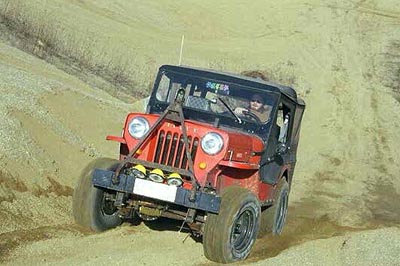 Thanks to Mike "Mad Man" Fogerty for this photograph of Jon's Jeep in the Badlands sand, and thanks to Jon for the others. -- Derek Redmond