Jim Marski has pointed out that "Even original paint chips are good primarily to determine the actual factory paint color of your vehicle if you do not have the paint code. They are many times inaccurate and too small to get a reliable scan on a paint store's 'color eye' paint scanner.

"Both PPG and DuPont have color libraries that good automotive paint stores can access to get info on old colors. In some cases the libraries have current formulas for old colors, but not in the new high tech paints, i.e. there may be a formula available for the paint in lacquer or enamel, but not a base/clear coat. In other cases, the library may have the original factory sample which can be scanned to produce a match.

"If neither of these works, determine if there are any parts of the vehicle with original paint in good condition such as inside the toolbox lid, that can be brought to your paint store to be scanned. If none of the above work, the paint store should have a book of colors by hue, which you can use with an original paint chip to find a close match. Looking through colors by year and manufacturer is tedious at best."

Brian asked on the CJ-3B Bulletin Board about how to figure out the original color: "I have the tub off the frame and it's going to be dipped and E-coated next week. Last step before paint. Under the layers of paint the stock color was/is Glenwood Green or Fountain Green Poly. It's a '58. The chips I have found on the net are small, so it's a little bit of a tossup between the two." 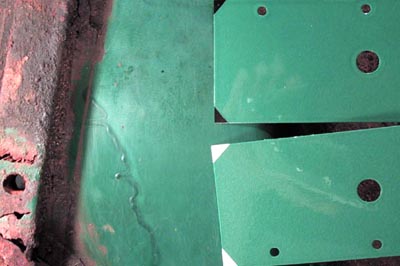 Rus Curtis replied: "When you take the body off, look at areas that were protected from weather and subsequent paint jobs. The most obvious is under the toolbox lid. Also, look at the windshield frame under the weatherstrip around the glass. The tub may have a lot of gunk stuck to it near the transmission/transfer case, and may have original paint there. If not, most likely it will be where the body sill liners are (the rubber cushions between the tub and frame). For my Jeep, I had cleaned off a couple of areas and visually narrowed it down. I used the code for 1954 and went down to a local paint store and asked if they could make a couple of paint sample cards to compare. This is my paint and Island Green Metallic samples on white and black primer." 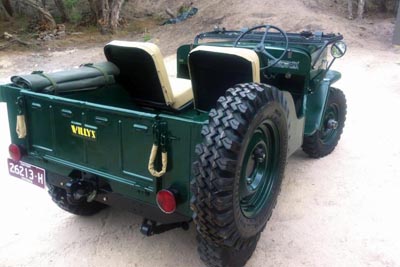 Dom Serong: "My 3B is also a '58 and I had exactly the same problem. We're both trying to match an aged paint against imperfect copies of the original.

"Even if your sample is from a well-preserved spot like under the toolbox lid where it's been kept away from UV light, it's still subject to aging and would not be the same colour as when it left the factory.

"Then, we try to compare what's there to a scan of an aged Willys colour pallette. The pallette itself is aged and may not have been a perfect representation even when new, then the scanning process includes its own colour bias and then so do our computer screens and printers. So at best for me it was a guess between the dark greens. It would have been easier with an unique unmistakable colour like yellow, but that's how it is.

"I couldn't determine with any accuracy what my original paint colour was -- based on my downloads/printouts from CJ3B.info mine could have been either Glenwood Green or Fountain Green or even possibly Spruce Tip Green.

"I had the additional problem that the Jeep had been painted over at least twice and left for long periods out in the elements, so the paint was very degraded almost everywhere. To complicate matters, out here in Australia the best sources of automotive paints came up with nothing when I provided Willys paint names. If it had been a Ford, no problems. But anything out of the ordinary and they were useless. A high-end computerised automotive paint scanner yielded no result.

"So I adopted the 'who cares' approach and just matched the paint by eye. Never mind the purists. 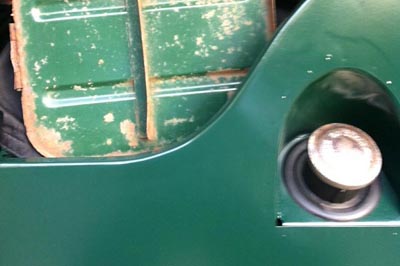 "Here's a photo of how mine turned out against the best sample I had, which was under the toolbox lid. This was morning light on a cloudy day -- every time I look at it, the colour seems different, so the match varies as well. But it's not too bad. I wanted it just a little bit darker and bluer than under the lid, because it seemed to me (from the more exposed bits of original paint) that it darkened off and shifted towards a bluish green a bit as it weathered.

"Bear in mind of course that this image has faults too -- the ambient light wasn't neutral and then of course there are the process biases which sit between the event and your viewing of it: my camera, image management software, your screen.

"It depends where you are as to what paints you can access -- here are three codes I considered, not sure if you can get these. All are from the PPG catalogue for commercial vehicles as I couldn't find much in passenger cars:

"The third option was the one I chose. As far as I'm concerned it's close enough to have probably been within the band of normal variation for whatever the original paint was, given 1950s automotive quality control!"

Brian: "Thanks for the pics and input. Rus, its amazing the difference primer will make under the top coat. The black primer looks richer than the white primer.Believe it or not the primer under my tub is brown and could be an early form of E-coat."

Stephen Heape posted this information on Fountain Green Poly: "I've been trying to run down a formula for the 177 Fountain Green paint code for some time in PPG base-clear paints. The numbers switched over to a formula in PPG's cheaper Omni line of paints but the color was too blue and the metallics just weren't right. My local paint shop checked with the color labs at PPG to see what they could come up with in a higher end paint. The color lab did a match on an original color chip and sent a formula for Deltron 2000 DBC which is a high end base/clear system. I understood from my PPG dealer that this is a 'Prophet Formula,' meaning that it could be converted to other paint types and brands. The formula for 1 quart is:

"I have not painted my Jeep with this formula yet, but I did do a test spray with base and clear to check the match on an unpainted and unfaded area of my original. It was a great match."

Bill posted a PPG code for Glenwood Green Poly: "After going to several paint stores and spending half a day, I came up with a mix number. Believe it or not, the same paint (Glenwood Green Metallic) was used on some 2003 Chryslers. The PPG color mix is 42073." 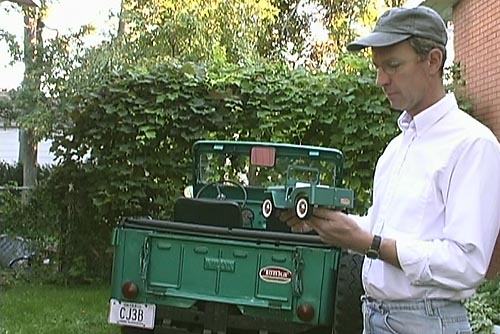 For my Fountain Green '59 I used Dom's approach, and went with the closest match I could find, which was '72 Ford Chelsea Green Metallic. By the way, the green on this Tonka Jeep was also pretty much identical.

Thanks to everybody for their comments. Further comments welcome. -- Derek Redmond  Also on CJ3B.info: