Well, you never know what's going to show up. For two decades I have assumed that the Treebark Brown '63 (see Showroom Original 1963 CJ-3B) was by far the most pristine unrestored CJ-3B we would ever see. But in 2017 I heard that Bob Miksch had bought this President Red 1960 model with just over 4,000 original miles! It has a few modifications, but the condition it's in is amazing. Bob Christy took some photos for CJ3B.info. -- Derek Redmond 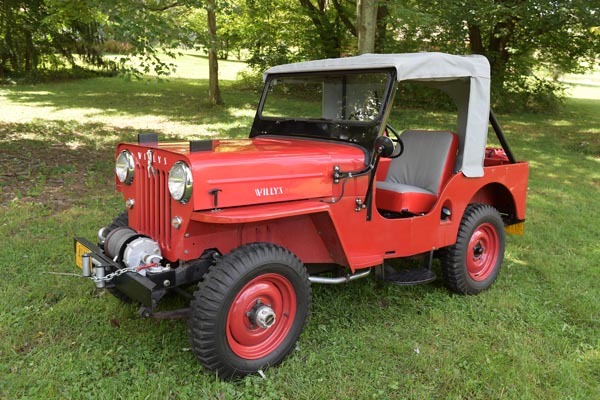 Bob Miksch made a successful offer on the Jeep after seeing it listed for $20K on Craigslist in Louisville, Kentucky, with a small picture (40K JPEG) and the mileage (4,090). To get it ready for showing, Bob began adding a few details, including a canvas halfcab, new seat covers, and a PTO winch that is just as clean as the Jeep. 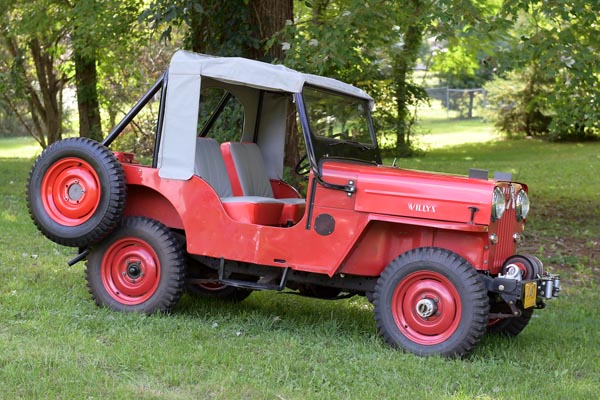 The 3B has serial number 57348 58713, from early in the 1960 model year. It spent the first few years of its life pulling gang mowers, cutting the bluegrass on a Louisville estate (and taking the kids on an occasional trip to the store for ice cream.) It was lucky enough to score an early retirement, after zero-turn turf mowers hit the market in the mid-sixties. 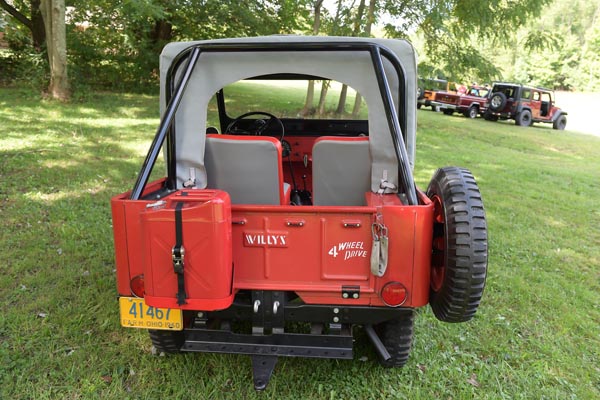 The tailgate and the Hall taillights do not have a mark on them.

The history of the roll bar is not known; I would guess it was installed by the dealer who sold the Jeep in Louisville in 1960. It inspired Bob to complete a trail-ready look with a Koenig Model 100 winch, Warn lockout hubs and a Rampage "Trail Can" toolbox. 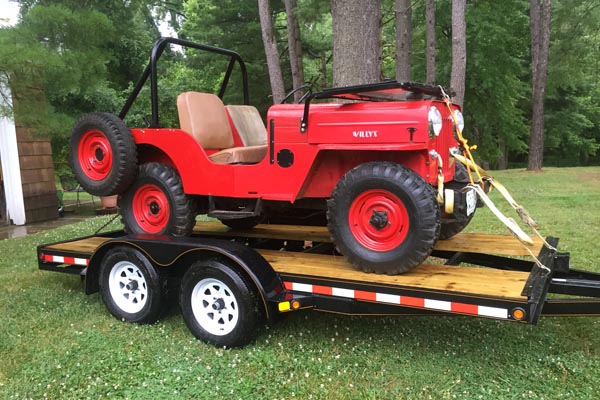 After only 4000 miles on turf, the original tires on the groundskeeper's Jeep looked like new, but they were hard and rotted. And there was no passenger seat (which was still an option in 1960) so Bob located one for sale in Salt Lake City. Both seats needed some spring work, plus seat covers that came from eBay but matched the original gray and red vinyl (on the driver's seat) very closely. 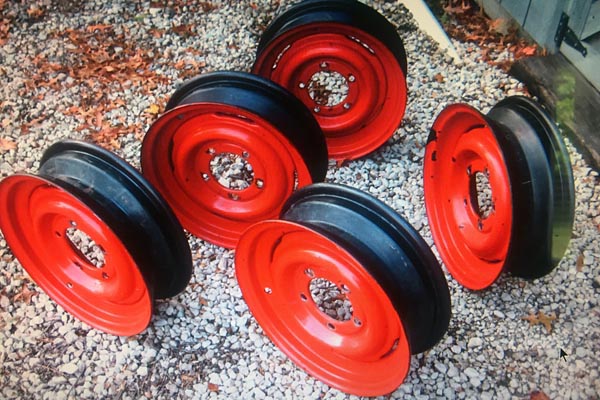 The OEM wheels seen here were 15-inch rims and in almost perfect condition. But Bob wanted NDT tires, and when he found a set locally, they were already mounted on 16-inch red wheels. 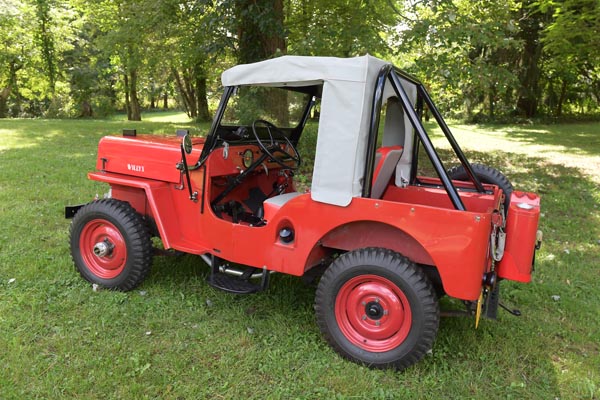 So the new, larger wheels (possibly Redwood Poly) went right onto the President Red Jeep, and the color match is close enough for now.

Bob had to re-route the exhaust pipe under the frame crossmember and the step (120K JPEG) when he installed a Koenig PTO to drive the new winch. (See also Koenig Winch Tips on CJ3B.info.) 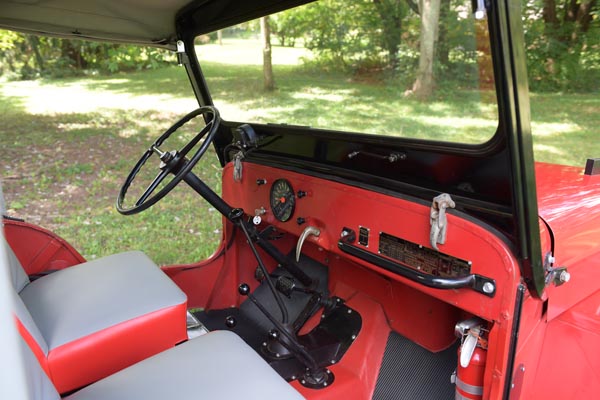 A small repro instruction plate for the PTO lever, reading "Winch Drive Control Engaged/Disengaged," was added to the dash.

A nice touch that will also keep the floors looking good is some rubber matting that Bob cut perfectly to fit. 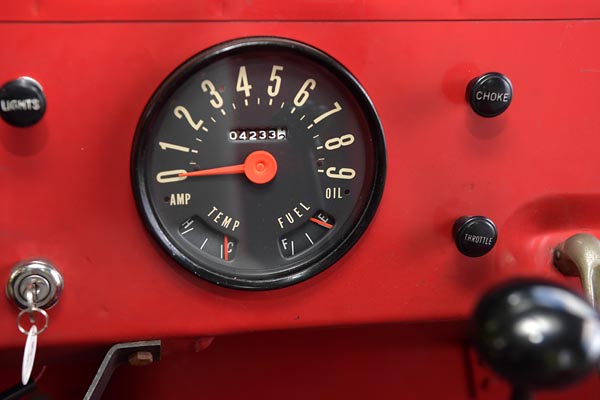 The odometer still reads only 4,233 miles, accounting for how little wear and tear is visible on this vehicle. But some things can deteriorate just sitting in a shed, and the gas tank needed replacing. An NOS example for a 1960 CJ-3B turned up at Quarter Ton & Military in Chickamauga, Georgia.

(I have now added QTM to Willys Parts Source Links on CJ3B.info.) 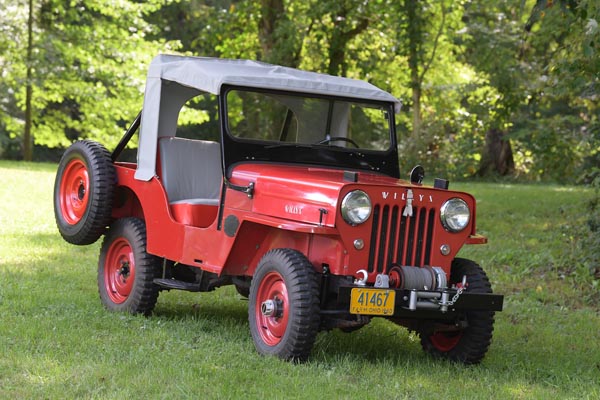 The OEM tools are still in the toolbox under the passenger side floor, in their bag with the part number tag. Bob had asked the owner in Louisville if the tools were in the toolbox, and he replied, "Toolbox? What toolbox?" 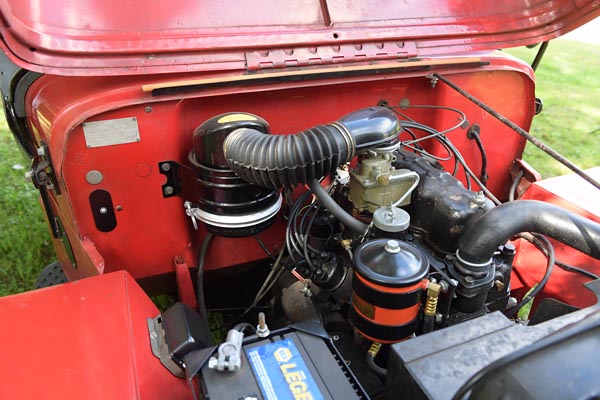 Nothing has been done to the engine except some carburetor service, a new battery and a bit of cleanup! 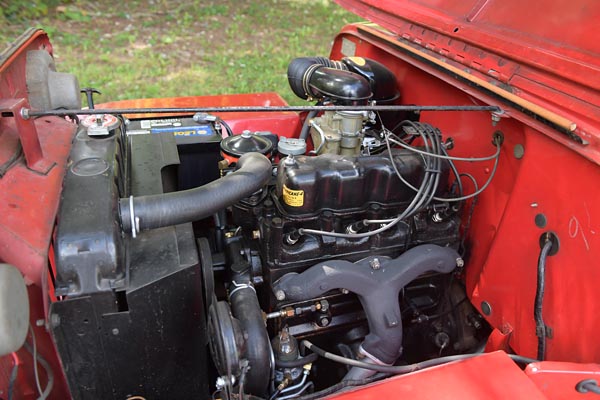 On the firewall there is a marking in grease pencil (70K JPEG) that reads possibly "96" and appears to have come from the factory. Bob says his 1965 CJ-5A (see Spring Willys Reunion 2018 on CJ3B.info) has a similar marking. 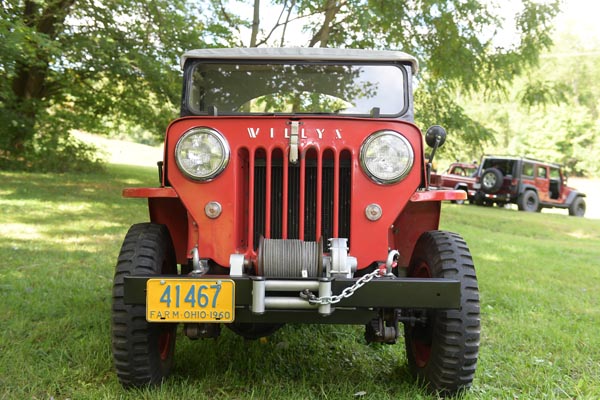 Bob is an Ohio farm boy and wanted 1960 farm plates; he stumbled on this set in a pile of old plates at his local rad shop -- the final touch for the 3B's first showing at the Northern Ohio Flatfender Cruise-In in September 2018. Watch for it at the Spring Willys Reunion and other shows in 2019.


Thanks to Bob Miksch for sharing the details, and Bob Christy for the photos. -- Derek Redmond