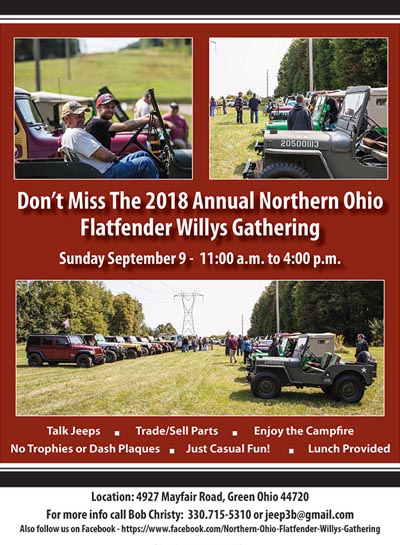 Mindy and Bob Christy hosted their annual Willys gathering again in 2018 at their home in Green, Ohio. It was rescheduled to Sunday, 16 September, due to the remnants of Hurricane Gordon bringing violent storms and up to 4" of rain to the Akron area the previous weekend.

Bob planned to have his new Willys-powered Empire tractor on hand for the show, and there are always hayrides, a campfire and lunch for everybody. No pre-registration is necessary, and you're welcome to just show up, and to sell or swap parts if you have them. Pictures from some previous years are below. 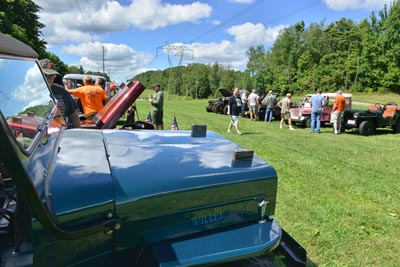 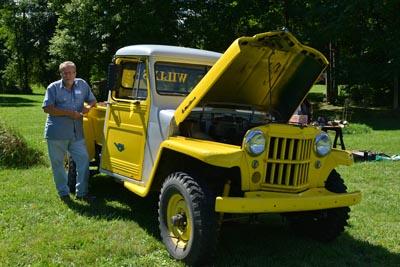 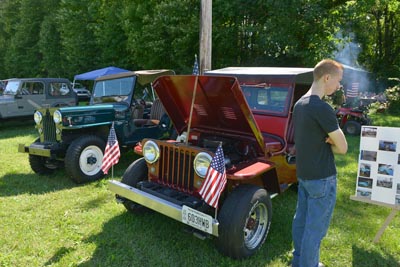 Parked next to Bob's 3B, the dark red CJ-2A with Ohio historical plates belongs to Bob Gallagher. 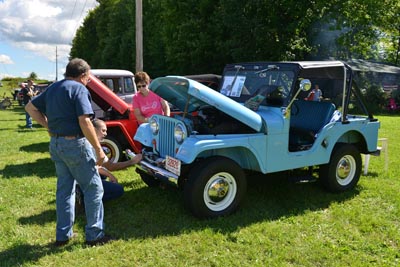 Keith Buckley took a close look at the chrome bumper on the CJ-5A Tuxedo Park belonging to Bob and Debbie Miksch. 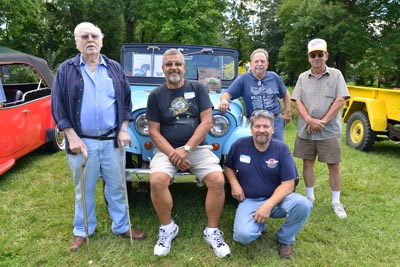 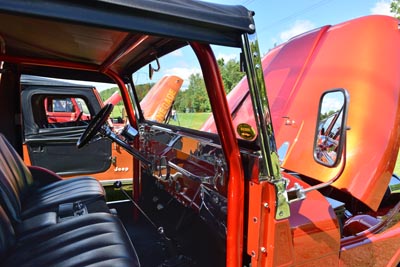 There were also some AMC Jeeps on hand, including Dan Swinderman's CJ-5. 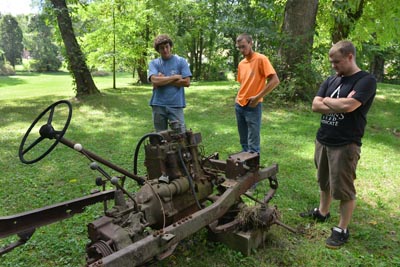 This F-head was once an early CJ-5, which Bob is planning to dismantle for parts. Also good to see some younger Jeep owners turning out for a Willys event. 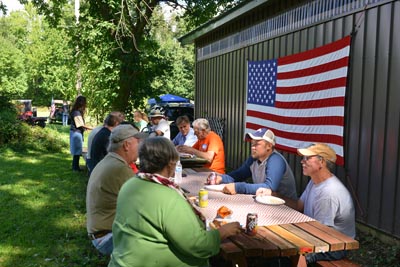 Barbecue and conversation is always a popular part of these gatherings. 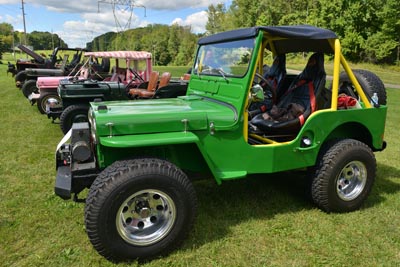 Tim and Rhonda Miller's eye-catching offroader apparently started life as a military M38. And the lineup behind it (350K JPEG) included a Willys MB, DJ-3A Surrey, and a built-up Wrangler YJ. 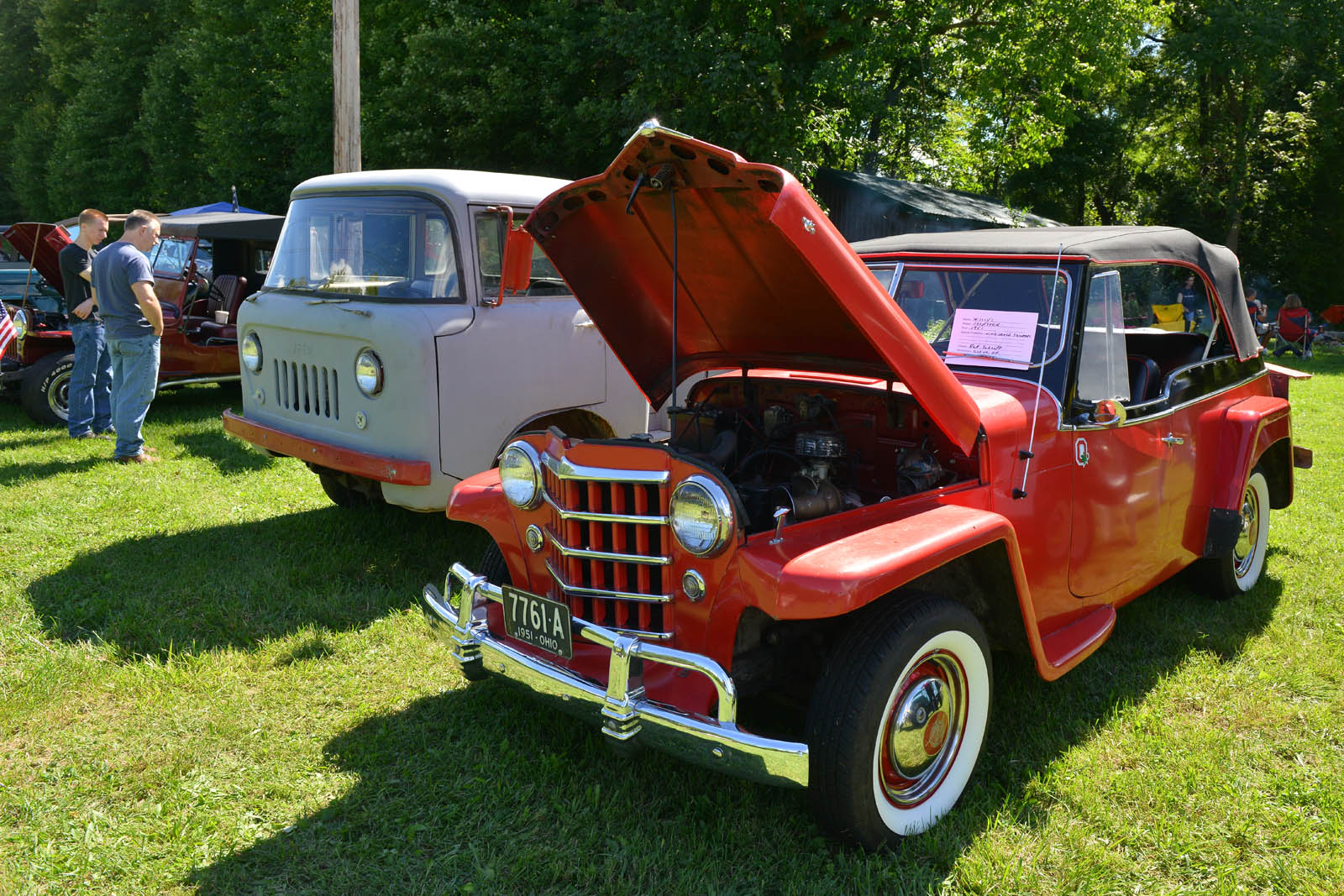 Like the Surrey, the 1948-51 VJ Jeepster was one of the few Jeep vehicles aimed squarely at fun on the road. 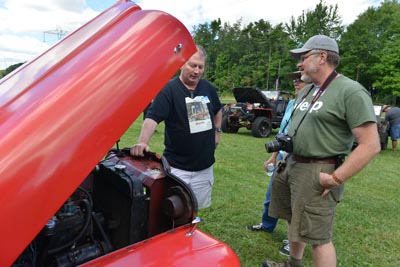 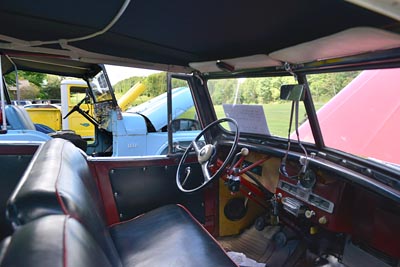 Pretty stylish and luxurious interior for an early Jeep. 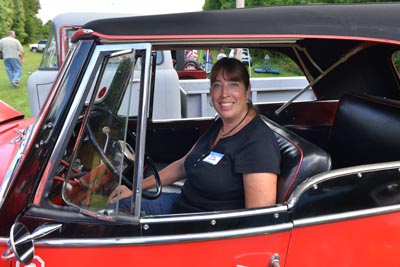 Mindy discovered she likes that luxury just fine, and is looking forward to driving her own Jeepster one day soon. 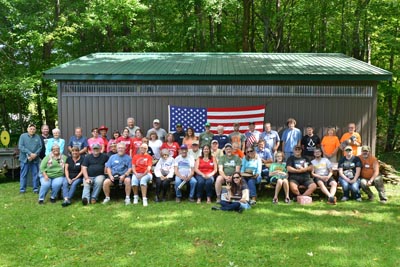 Everybobdy posed for a 2016 group shot -- I guess Bob was taking the photo. 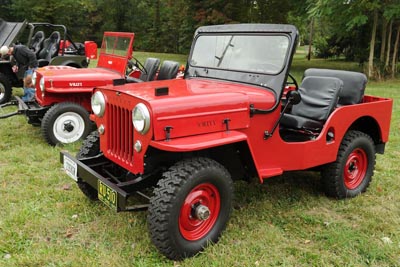 Bob and Mindy first held their own Northern Ohio Willys get-together in 2010, and invited flatfender owners to their place in September of that year. Thirteen Jeeps, including this nice '53 CJ-3B owned by Jim Tedrick, were on hand for the first gathering. 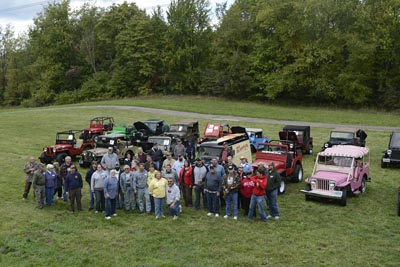 They decided it would be an annual event, and attendance at the event has increased every year since then. This great group shot is from 2012. Mindy wrote a history of the show in Vol.1 No.4 of The Dispatcher magazine. 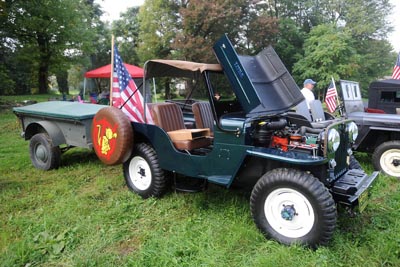 Bob's 1953 CJ-3B is seen here at the 2012 Cruise-In, showing off his custom hat-channel hood reinforcement. 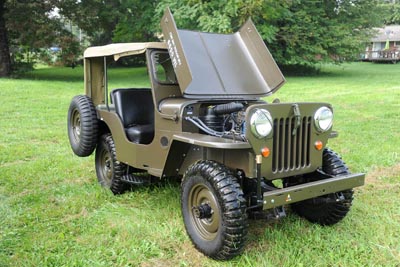 One of the most talked-about CJ-3B restorations of recent years, Dan Walton's 1964 U.S.Army CJ-3B, was also in attendance in 2012.