This Jeep has serial number 454GB2 39701B, with the extra "B" stamped at the end indicating it was exported to Brasil. The number comes near the end of the 1954 model year, and it is surprising to look at the serial number list and see how many of the vehicles were being exported by that point. 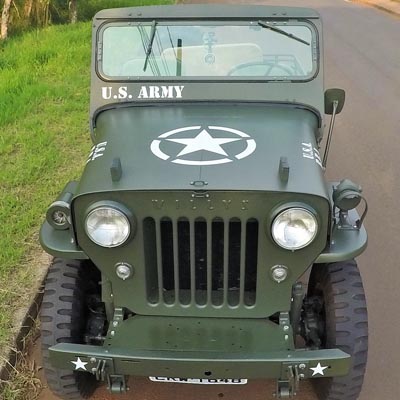 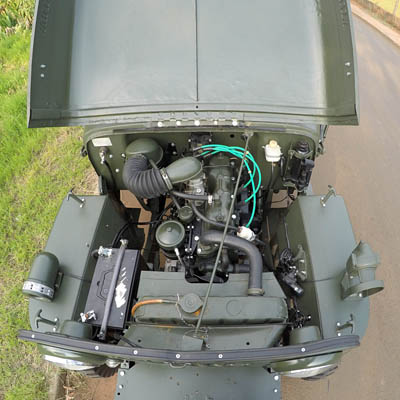 Clóvis says, "I am from Chapecó in Santa Catarina state, Brasil. I have followed CJ3B.info for some time, and I am sending images of my militarized CJ-3B 1954, which originally was imported from the USA for use in agriculture. I bought my Jeep in São Paulo state in excellent condition. I am the 4th owner. I have owned it for 5 years, and it has the original 4-cylinder Hurricane engine, with 3 speeds and 4x4." 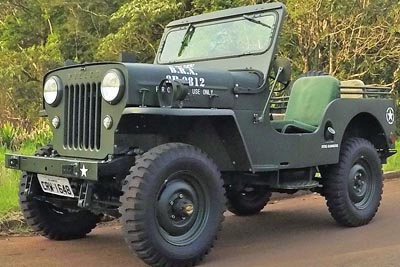 According to Clóvis, the original paint on the civilian Jeep was beige, possibly Palm Beach Ivory or Coronado Sand, which show up on different 1954 paint sheets (see Willys Paint Samples 1953-54.)

"Less than a year ago I restored it, installing military accessories and changing the color of the paint to Olive Drab. I like military vehicles very much, and I restored the Jeep to the standards closest to the American military Jeep, because it is an imported Jeep. I also did not want to confuse it with Brazilian military vehicles." 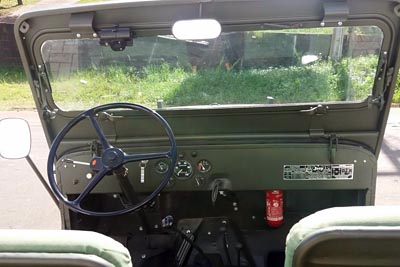 "The restoration consisted of taking off and preparing the entire body of the Jeep. Accessories were installed -- siren, anti-aircraft light, blackout taillights, and tire and gas can holders. I still have not got the canvas roof -- I'm looking for the most suitable model." 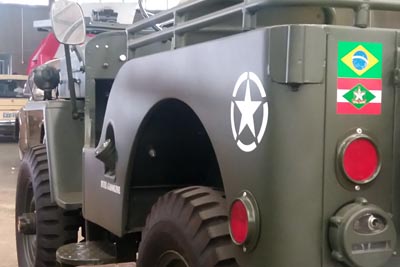 Clóvis opted for U.S. invasion star markings, and added stickers with the flags of Brasil and the state of Santa Catarina. The state flag (above) has several symbols that also show up on many U.S. flags, including a star, eagle, and Phrygian "liberty" cap. The wheat and coffee branches represent the importance of agriculture in Santa Catarina. 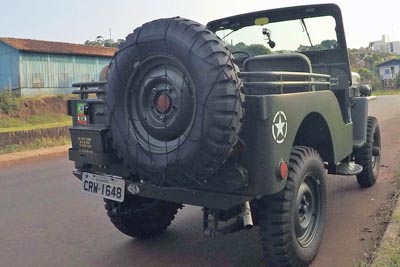 By the way, an older Santa Catarina flag (above), in use from 1889 to 1937, had a more obvious similarity to the American "stars and stripes." It had thirteen stripes for the counties in the state, and stars representing all the state's municipalities. (Flags of the World) 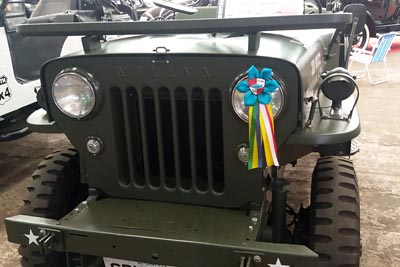 "On 10 September 2017 in Chapecó, my CJ-3B was awarded as the highlight of the cars of the 50s, among the vehicles exhibited at Classic Motor Chapecó 2017."


And the shield in the center of the ribbon, also has an American connection, in the form of the Chevrolet logo. It's the crest of the Opala Clube Chapecó, sponsors of the huge annual car show. The Opala was a mid-size Chevy made only by General Motors do Brasil from 1969 to 1992. One of the best known of the Brazilian muscle cars is the Chevy Opala SS (see Chevy Hardcore). 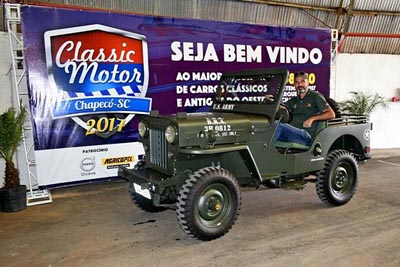 Here's the official show photo of Clóvis in his Jeep, under the banner reading seja bem vindo or "welcome" to Classic Motor Chapecó 2017. 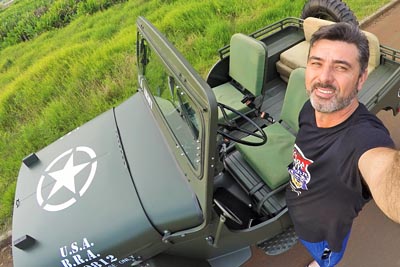 "As for me, I am married for 10 years, and we are expecting our first child. I was born in Santa Catarina, third generation of Italian descendants. I am an Agricultural Technician -- I worked for more than 20 years in the dairy industry and I am currently a commercial representative of a company that sells dairy bull genetics."


Thanks to Clóvis for the photos! -- Derek Redmond