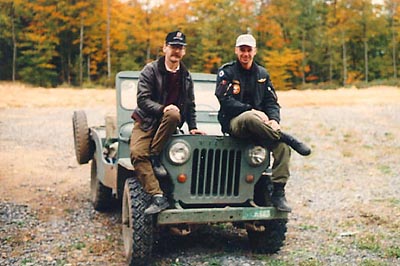 "I have a Canadian-made CJ-3B, built in Windsor, Ontario by Kaiser of Canada in 1964, serial number 10C 10172. I would like to find out its history if possible, and if there are any more still around that were made in Canada. 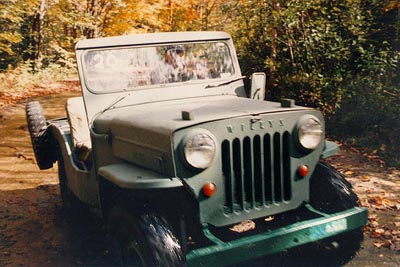 "My wife Sylvie Roy and I purchased it for $250 In June 1994, upon finding it completely original but very neglected. It had not run in over three years, yet all it took was a boost and change of fuel and we were able to drive it home. It was painted Cat yellow and black, with dark blue showing through where the outer layers had peeled.

"We knew that we had to take it through a government inspection before we could licence it, so in one-and-a-half months my wife and I stripped it to the frame and repaired or replaced what was needed. I feel that I'm a lucky Jeep fan as my wife sometimes gets as greasy on this vehicle as I do." 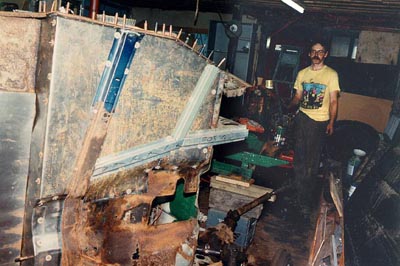 "I had to do extensive fabrication as it was missing most of the floor supports and floor.

"While the tub was off I dropped the axles and suspension and rebuilt them back to specs and painted everything green or black. We reinstalled the tub, painted it with military surplus green, and safetied it in 20 minutes flat. It served as our daily driver until New Years Eve 1994, five months later. We were going to put it in the garage when the snow came, but we just couldn't stop. Driving around downtown Montreal in the snow in my CJ-3B with no top has got to be the coolest. Even if it's the coldest!" 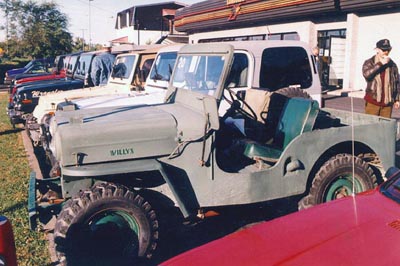 "We even took it on a rally with 20 newer Jeeps, from Montreal to Hawkesbury through the bush and trails in October. Now it is stripped and crated, and in the beginning stages of a complete return to as close to original show room condition and color (we hope it was blue) as we can get, and still drive it daily in the summer." 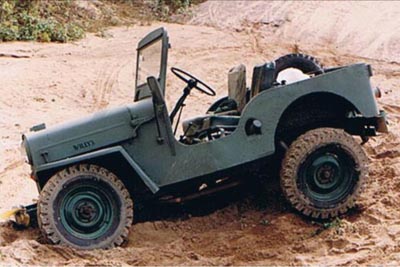 "Our goal is to be on the road fully restored for the first Willys day in the spring of 2000." -- Alex Houle

Thanks to Alex and Sylvie for the pictures and story of this unusual Jeep, which also has an unusual heater. -- Derek Redmond

We're looking for more details on Jeeps produced at the Kaiser plant in Windsor, and on Jeeps carried on Royal Canadian Navy vessels.