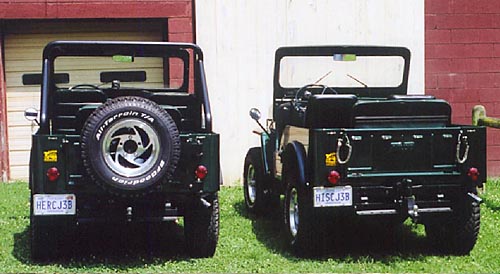 Back in December of 2002, I was planning a restoration project on two Jeeps -- one a '53, and the other a '63. Before starting my project I read everything I could find on CJ3B.info. Needless to say, it was very helpful, and I have now completed both Jeeps: HERCJ3B is my wife Mary's, and that is her license tag number. My 3B bears license tag number HISCJ3B. Both Jeeps are painted the original green color using the original paint numbers obtained from CJ3B.info. 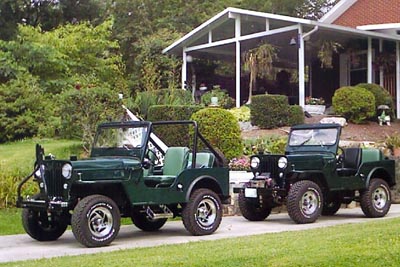 For HERCJ3B (the '53, on the left in these two photos) I used the frame from one Jeep which I had a title for, and the engine from another Jeep which I had a title for, so I was required to apply for a new title: Specially Constructed Vehicle Title #71622269. Without going into a lot of detail, every thing that rusts, rots or wears out has been repaired or replaced, starting with the frame. The engine block has been rebored and a complete engine rebuilt (90K JPEG). Transmission and transfer case (80K JPEG) completely rebuilt also, plus all new body.

In lieu of the original side mounted spare tire, I chose to fabricate a rear mounted swing-out type (110K JPEG) because of the oversize wheels and tires. I thought the side mount would be a little obtrusive.

The "Bulldog" hood ornament is from a Mack truck. I had one on the original 3B I bought new in 1953. 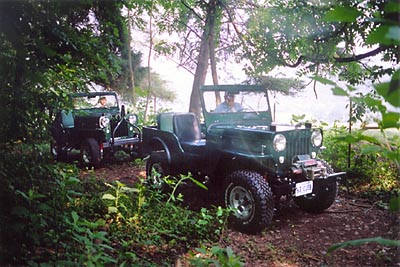 My wife's mother, who has now passed away, got me started in vehicle restoration when she gave me a 1948 International Harvester Cub tractor years ago. My son David sparked my interest in restoring Willys Jeeps. I had owned a new 1953 Willys Jeep and gave it to him in the early 1960s to trade in on his first car. Years later, he came in driving a similar Jeep, old and rusty, and said, "Here's your Jeep back." I told him I didn't want it, but he insisted I keep it. 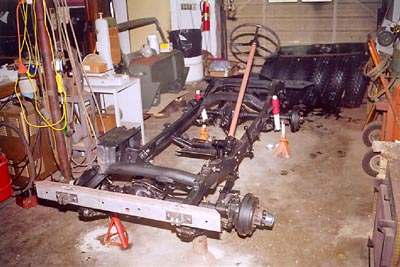 In completely disassembling to the bare frame, practically every nut and every bolt is a challenge. Starting with the frame, the spring hanger bracket holes were elongated, so those were the first new parts to be replaced -- not an easy task since they are both riveted and welded on to the frame.I had the frame and axle housings sandblasted and primed with an epoxy primer, and finished with GM chassis black. 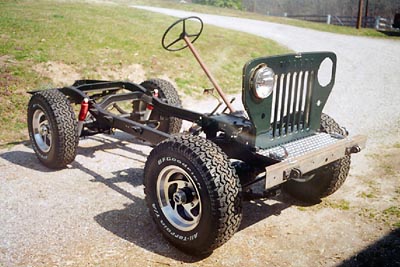 One thing I read was how difficult it was to remove the steering wheel, so I thought I might as well tackle that first. I made a slide hammer, but it was not up to the task. I then modified it so as to utilize a hydraulic jack, which did the job. See photos in Steering Wheel Removal on CJ3B.info.

Since the hydraulic jack worked so well on the steering wheel, I made a hub puller to remove the rear axles the same way. See details in Brake Drum and Wheel Hub Removal. 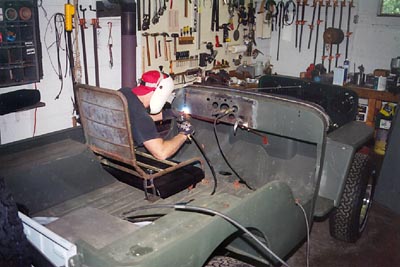 Just a few of the problems I experienced with the two Omix-Ada repro bodies I purchased: 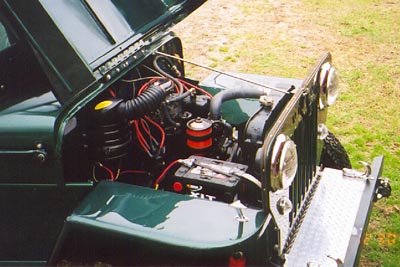 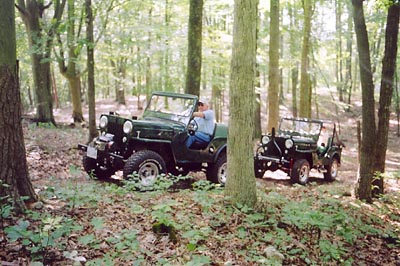 I didn't know how I'd handle retirement, but I haven't had any trouble. The secret is, you've got to stay busy.

Mary sometimes drives HERCJ3B to her job at the Anderson County Courthouse. And the newlyweds in the wedding picture (90K JPEG) are Josh Bunch and my granddaughter Natalie Harris -- they drove her granny's Jeep at their wedding on 21 July 2007.

Thanks to Bob for the story and photos. -- Derek Redmond