Some of the most difficult jobs in the maintenance or restoration of an old Jeep, have to do with the removal of something that's been on there a long time. Such as a rusty nut, broken bolt or exhaust manifold stud, or especially a steering wheel. 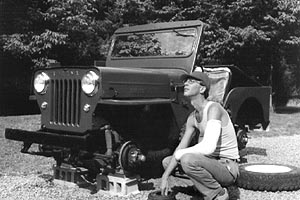 In particular, removal of the wheel hubs or even the brake drums from the axles is one of those times when any backyard mechanic's patience may be pushed to the limit. We recommend bad language (if there are no children within earshot), or even better, a pause to seek spiritual guidance and think about where this problem fits into life as a whole.

Note: Safety considerations should always be paramount, particularly in these situations where both you and the steel parts are under stress. In the photo, the cast on my arm is not related to removing the wheels, but there are other cases where people have been injured by parts which suddenly pop off under pressure.

Karl Morton has another note for anyone who can't even get the wheel rim removed: "If you haven't got the lug nuts off, make sure that you are turning them in the correct direction. You probably have both right and left hand threaded lug nuts; Willys put them on the older Jeeps. Look for an 'R' and 'L' stamped in the ends of the lug studs. If this is not the problem and the lug nuts are rusted in place, then the liberal use of penetrating oil such as 'Breakaway' or 'Kroil' mixed with equal parts of patience and brute force should do the trick." 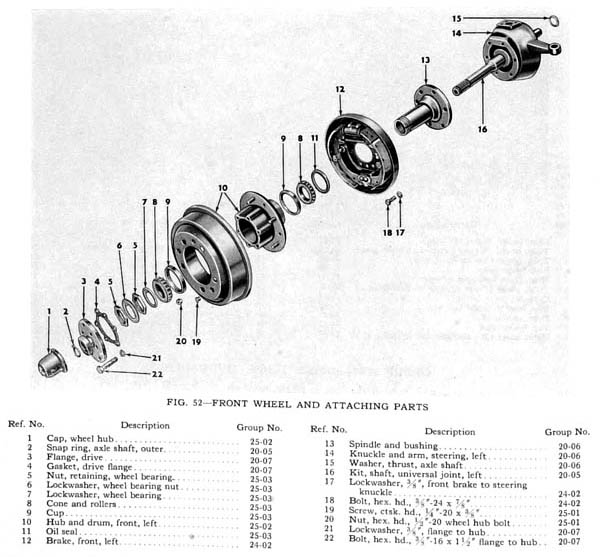 Paul Remington is one of many people who have asked for suggestions for dealing with this problem, on the CJ-3B Bulletin Board: "I have been trying for a week to do a brake job on my '64 CJ-3B but can't get the drums off. I have soaked the lugs in WD40 and beat on them till I am blue in the face. Must be a trick that I don't know about."

Rick Cullen asked: "Do you not have to back the drums shoes off some so they will clear the drum if they are worn?"

Jon Paulsen replied: "Yes, if there is a ridge formed in the drum, the adjustment of the brakes may need to be loosened for the pads to clear the ridge. And have the (three?) slotted screws which secure the drum to the hub been removed? This gave me fits my first time around with 3B brakes, since more modern drums are just secured by the wheel/lug nuts, and the screw heads were covered with grunge. After that, it came off quite easily."

Joel Kamunen advised: "Rent, borrow or beg, but get the correct brake drum puller. Don't try a J.C. Whitney puller or some other inferior type. If you use an OEM Willys or Jeep puller it should come off. They are usually pretty tight and it can be dangerous when they pop off."

Rich Lambert noted that on his 1949 CJ-3A, the brake drums were pressed tightly into the hubs, so he removed the hubs first. He said, "I took the drums and hubs to a machine shop where a guy separated 50 years of togetherness in about 5 minutes and charged me 10 bucks."

JC Jenkins commented: "The original service manuals all call for the 'striking hub puller' -- it needs to be the industrial strength type, just for hubs. Tighten that bad boy down, hit it with a good size hammer, 3lb or better. I have not seen an axle break yet, and if it comes off easy, it wasn't on tight enough."

Tom Erichsen agreed: "JC is right, get the right tool for the job! If you get a puller like the one shown on Richard Grover's Willys Trucks page your problems will be over."

Chris Henry reminded everybody: "There have been many comments on this, but I feel it is very important to mention this. Since the hub is on a tapered shaft, the hub must be removed using a "hub puller" that is a puller that exerts its force from the LUG BOLTS to the axle shaft. A gear or pulley puller does not do this (since it exerts force from the edge to a center shaft). In fact what happens is that the hub is actually pressed on the shaft. In effect "pinching" the hub on even tighter. Since these types of tapered axles have been out of production for decades, it is sometimes difficult to locate the correct tool locally. Also, you may need a slide hammer to pull out the axle shafts once you do get the hubs off. You should be able to fabricate something that will work.

"Also, remember to PUT THE NUT BACK ON THE SHAFT when you have the puller on, I have a friend who broke his because he forgot. This keeps the hub from shooting across the garage. They almost explode when the tension is released. Even before hitting it with a hammer it can spring off. I almost broke my toe the last one, because I had forgotten this little tip."

Jim Sammons commented: "I had to build my own puller to do this. I ran into the same problem on several jeeps. I built a puller that attaches to the lugs of the rear hub. It's just like any other puller except it doesn't have any arms. The plate I use to build it from was half inch. I welded a 9/16 nut in the middle of it and used the corresponding bolt to exert pressure on the end of the axle. The worst one I did took a full day of heating and beating, tightening on the bolt with an air impact, and a lot of cussing. After working on it all day I still couldn't get it off. So I heated it up one last time and tightened up the bolt till I thought something would break and left it this way. The next morning I backed the bolt off and ran it up one more time with the impact and she came off right in my hands without a struggle. At this point I was amazed but I learned my head is harder than a Jeep's. Don't give up, and don't worry about the heat, it didn't hurt a thing."

Rus Curtis mentioned a shade-tree method he saw on the web somewhere: "Buy three carriage bolts slightly smaller than the holes for the backing plate mount and get them about 6"-8" long (with nuts and washers). Insert them, with the nuts and washers already on, from the outside through the axle housing holes. Once inserted, the round heads will be towards the back of your flange. As you tighten the nuts against the axle housing flange, the heads push against the back of the flange. With the bolts arranged in a triangle pattern, you turn each one a little at a time and after several turns, your flange will pop off! Oh yeah, make sure after loosening the axle nut, that it's still threaded on the axle enough to keep the hub from explosively popping off the axle!"

Hollis Wooldridge wrote, "After reviewing the comments from Board readers, I made a simple rear hub puller that works well and is easy to build. I cut the interior hub out of a a spare wheel (where it connects to the rim in 4 places) and in the rim center, I stacked up various large washers that I had lying around. This was to allow clearance for the castle nut and axle stub. The washers were all welded together and to the wheel then a 3/4" coupling nut like the type used to hang all-thread was welded to the top of the stack. I also welded a 3/4" nut to one end of a 8" piece of all-thread. This was screwed through the coupling nut and the whole tool then mounted to the hub with the lug nuts.

"I had already removed the castle nut and washer then reinstalled the nut, so now I tightened the all-thread against the end of the axle. When it was good and tight, I banged around on the wheel and puller with a hammer. The hub and wheel assembly popped right off! The only caution I have is to make sure your welds are good and that the castle nut is left on the end of the axle as the wheel turns loose with some velocity. Thanks to everyone for helpful hints as they allowed my subconscious to work out the details of this little helper." 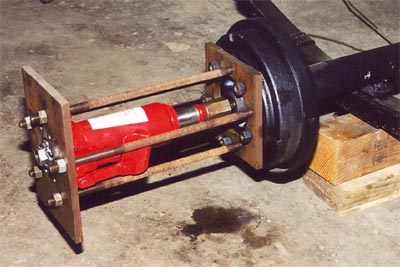 Bob Harris sent this photo. "Since my hydraulic jack worked so well at pulling the steering wheel, I made a hub puller to remove the rear axles the same way. However, I didn't realize that a hydraulic jack will not work in a horizontal position, at least my jack didn't. I left the jack in place and after applying heat to the hub, I alternately tightened the five nuts on my puller until the axle finally released." 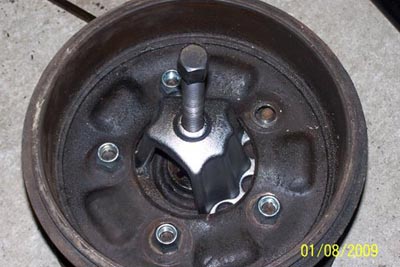 David Cope also used what he had: "Using a hub puller that was too small (50K JPEG) I was able to adapt it using a front brake drum (right). This thing works; your web site got the creative juices flowing."

Bart McNeil went to the literature: "Although I am not a mechanic and can't pretend to know anything about rear hubs, I ran into a very interesting approach to the problem in the Standard Guide to Automotive Restoration: Matt Joseph On Restoration. Joseph speaks of the difficulty of removing splined or keyed hubs from axles. The first attempt should be with a threaded puller. If this fails he cautions you against using a 'striking hub puller' which he feels can sometimes warp the hub or split the end of the axle. His alternative solution is simplicity itself: 'Loosen the axle hub retaining nuts about half to three-quarters of a turn from finger-tight and replace their cotter keys. Now drive the car a mile or two on a bumpy road. Usually the hubs will come off in your hands when the nuts are backed off the rest of the way. Of course, if the car isn't running, this won't work and you may have to use pullers or even mild heat on the hubs to remove them. If heat is used, it should be kept under 350 degrees Fahrenheit to avoid changing the metallurgy of the axle and hub. It helps to strike the hub with a brass hammer while applying force and heat.'"