The Royal Australian Air Force (RAAF) has always bought vehicles of basically civilian style, in small numbers. For some reason the RAAF never bought the vehicles specially made for the Australian Army, e.g. Land Rovers. In the 1950s and 1960s the RAAF bought some CJ-3Bs, International Scouts and a few Land Rovers. I guess the RAAF would have bought less than 50 CJ-3Bs. I was in the RAAF Reserve in 1971 and saw a training film featuring a CJ-3B and a Scout.

I purchased this Jeep in 1972 from a dealer who had bought it at a government auction (it still had the lot no. painted on the windscreen). It was not going, but was in good original condition, with all the original parts and 26,134 miles on the speedo. It had canopy bows, but no canopy (it was originally fitted with a full canopy, side curtains, and canvas doors). It was still painted in RAAF "blue-grey" (original paint, not a respray). There was water in the oil and the gearbox had some damage. I tried to get it going, but was unsuccessful due to poor electrics and damaged rocker gear (someone had made a new rocker shaft support out of a block of aluminium). 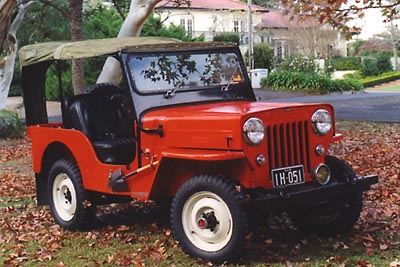 I decided to restore the Jeep and eventually pulled every last nut and bolt apart. I decided to restore it as a civilian Jeep with the colour scheme from a Jeep brochure I had, hence the orange colour with white wheels and black windscreen. If I was restoring it again I think I would restore it as a RAAF vehicle in blue-grey. The restoration was finished in 1974 and it has been registered for road use ever since (now showing 35,079 miles).

I fitted the fog light and free-wheeling hubs. Original extras fitted for the RAAF include the shovel and bracket, and the front lifting eyes. 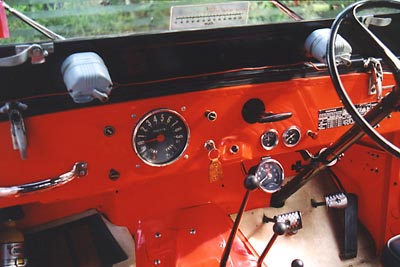 The Jeep was originally built as a RH drive, not converted. Plates have been spot welded over the holes for the pedals, steering column, brake M/C access and ignition switch, and the body painted before fitting to the chassis. I fitted the tacho and fire extinguisher (a CCl4 fire extinguisher was originally fitted), but all other items are original. Note the amp and oil gauges, the Lucas wipers, the relocation of the handbrake and ignition switch, and the RAAF card holder fitted just above and right of the dash information plate. 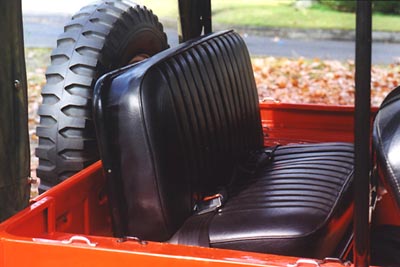 The rear seat was recovered in similar black vinyl to the original pattern. The seat belts were fitted later. 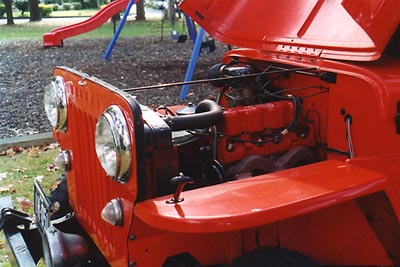 Engine no. 4J205796, all original. Missing clamp at rear of rocker cover to hold HT leads. The 12V electrical system was made in Australia by Lucas, including generator (dated 10/58), regulator, starter, battery, headlights and wipers. I think the horn and front parking lights were made in USA. 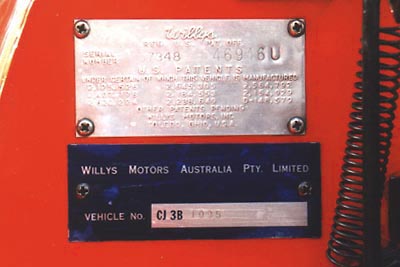 (Note: as of 2018 the CJ-3B factory production records are available. Ian's Jeep can be located by its stock number 1095. See Willys Australia Serial Numbers on CJ3B.info.) 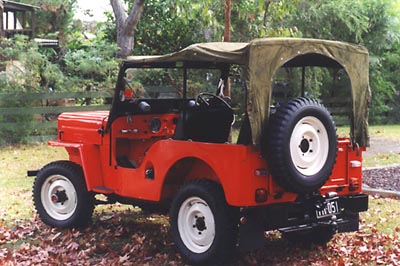 The tail and reversing lights are not original, as I had to fit turn indicators for registration. RAAF modifications included the spare wheel on the rear, full implement bar, pintle hook and lifting eyes inside the bumperettes (hence only useful for lifting and not towing). I bought the canopy second-hand in fair condition. 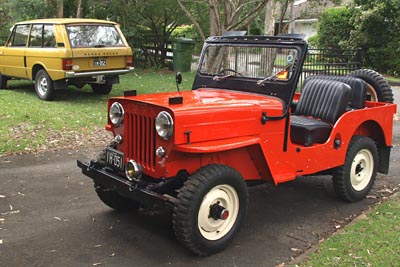 As of 2012, I have just completed a repaint of the outside of the CJ3B to correct some defects which had developed over the last 40 years. I am now looking at getting all the canvas remade. -- Ian Hall


Thanks to Ian for the photos and information. -- Derek Redmond

Also on CJ3B.info, see an RAAF Jeep on the tarmac, and more Jeeps in Australia.