North Carolina pork barbecue is so famous that Lexington NC is called the "BBQ Capital of the World." One of the early BBQ chefs who is given credit for perfecting the slow-cooked pork recipe after World War II, was also the original owner of a 1953 CJ-3B. His son-in-law Greg Farrell brings us the story of that Jeep. -- Derek Redmond 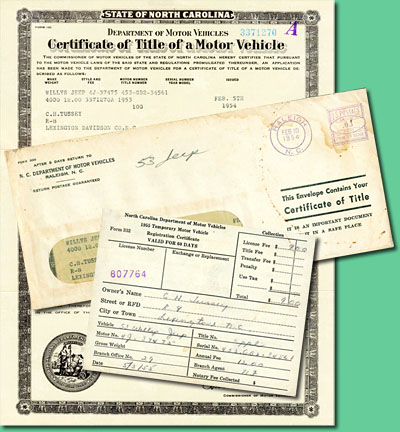 My father-in-law, Holland Tussey (currently 87) purchased his 1953 Willys CJ-3B Jeep on February 5th, 1954 to use primarily as a farm vehicle. He snatched up one of the last '53's the dealer had on their lot. He doesn't have the original sales receipt and can't remember exactly what he paid for it, but knowing him, I'm betting he got a pretty good deal. Upon closer inspection of the tag registration, I discovered he didn't purchase a license tag until May 3rd, 1955. I'm assuming he eventually saw the need for highway driving and decided to purchase a tag. 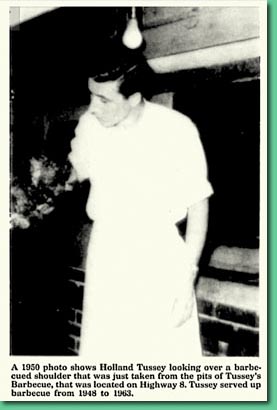 Holland Tussey was one of the pioneers of North Carolina pit-cooked barbecue, and ran Tussey's Barbecue, a successful BBQ restaurant in Lexington, from 1948-1963. This 1950 photo of Holland is a clipping from The Lexington Dispatch, 26 October 1984.

Below is a photo of Tussey's Barbecue taken sometime around 1951-52. The restaurant is still in business in 2011 as Speedy's BBQ. 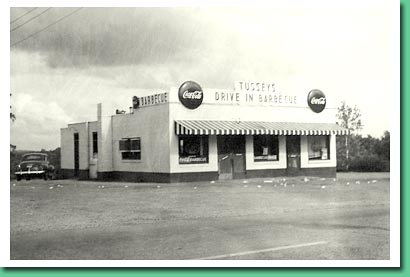 In addition to the restaurant, Holland farmed on the side, and raised ponies. He used his Jeep for "anything and everything" around his 150-acre farm. He would also drive it each evening to his cousin Ken's country store where all the locals gathered to discuss current events. My wife Holly, who was the oldest of the four siblings, has fond memories of riding in the Jeep to that country store and playing under the gas pump lights with the other kids. The men played cards, told jokes, smoked cigars, and drank sodas. She remembers the Jeep being shiny and new during those years and still remembers how the wind felt blowing through her hair on those warm summer nights while heading home. 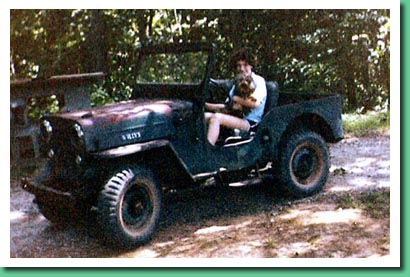 Here is Holland's son Robert and their family pet Benji during the summer of 1979 or '80. Benji loved riding in the Jeep and would often hop up in the passenger seat (60K JPEG) to let you know he was ready to take a ride. The Jeep was still running at this time, and had been since it was purchased; it even had the original tires on it.

The Jeep was mostly used to haul fencing materials, feed sacks and trash, and to pull hay wagons. It was also used in the fields for hunting quail and other wild game. But most of the wear and tear on the Jeep was the result of everyday use. Holland's four children (two girls and two boys) used it as a recreational vehicle around their neighborhood. Somehow it managed to survive each one learning to drive, but not without its fair share of bumps and bruises. My wife remembers parking the Jeep on a slope and forgetting it was in neutral, then watching it roll down a hill and slam head-on into a large oak tree. Luckily the front bumper was the only thing damaged. Holly also remembers another time when she was speeding down a dead end dirt road, only to discover the Jeep had no brakes. At the last second, and to avoid running into the woods, she made a hard left turn and the Jeep rose up on two wheels before coming to a stop and falling back down. She was so scared she totally forgot about the emergency brake. 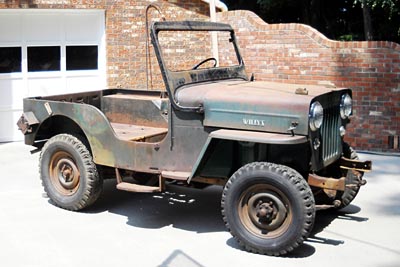 To this day the Jeep remains in pretty good condition, with only a few nicks and scratches, and some light surface rust.

I first became acquainted with the Jeep shortly after my wife and I started dating back in 1980. One weekend when I was visiting her, she asked if I would like to take a ride in their Jeep. Not only was I amazed she could drive a stick shift, but I was equally impressed with her driving abilities. I knew at that point she was a keeper. After we were married in '82, we moved to another state for several years. During this time the Jeep's engine developed some running issues and my father-in-law parked it in his basement. It sat there tucked away for the next 17 years. I made several attempts during those years to purchase it from him, but because of its sentimental value, he wouldn't budge. 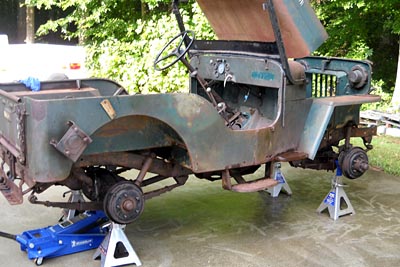 After Holland sold Tussey's he opened another small quick-order restaurant named "The Snack Shop" and ran it until about 1999 when he finally retired from the restaurant business, and decided it was time to get the old Jeep running again. He towed it up to his carport and slowly began to tear the engine down. I remember visiting one day and seeing parts all over the carport floor, and the Jeep up on jacks. He had a local mechanic and machine shop do the repairs to the head and block (which I believe had a cracked ring and broken piston.) Shortly after the engine was returned, my father-in-law developed some health issues and the repaired engine block never made it back into the Jeep.

Another 10 years went by and the Jeep and all its parts just sat there scattered under that carport. Even though it was under a shelter and out of direct weather, the moisture factor still caused some surface rust on many of the parts. Finally, in the fall of 2010 we got the break I was hoping for. While visiting her dad, Holly made reference to the Jeep and explained how she hated seeing it, year after year, just rusting away. She suggested he let us collect all its parts and move the Jeep to our basement garage. He reluctantly agreed. The following weekend my two sons and I gathered all the parts up and towed the Jeep to its new home. 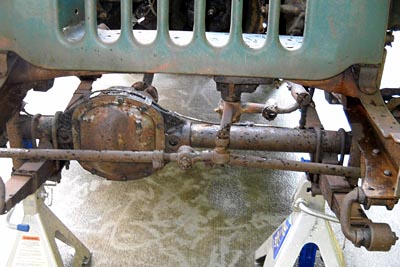 For over a year I have been cataloging the parts to determine what is missing, what still works, and what needs to be replaced. One missing item was the original Carter YF carburetor. Holland couldn't recall what happened to it, so I found an original replacement online and rebuilt it. Since then I found out that my brother-in law had taken the original to his home to keep it from being damaged. Now I have two identical Carter YF's. All the other major components are accounted for, and either still work or just need rebuilding. 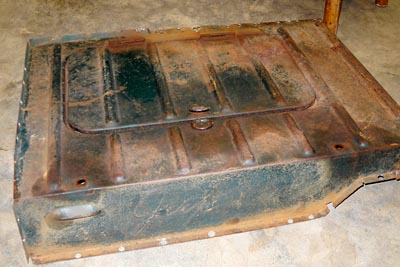 The tub, fenders, hood, and grille have some areas of light surface rust, and in some areas the red factory primer is peeking through. What paint survived, is dull and oxidized and looks almost military drab green, however, the paint under the tool box lid (50k JPEG) looks as new as it did when it rolled off the assembly line, and appears to be either Woodstock Green or Willow Green. This color sample should come in handy if we decide to stay with the original color during restoration. 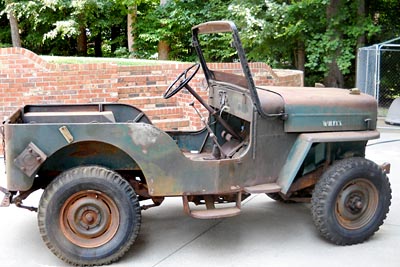 Our Jeep came from the factory with one ALA taillight over the license tag, which was damaged at some point. I consider myself pretty lucky to have recently acquired both original right and left NOS ALA taillights (100K JPEG) from a connection on the CJ-3B Bulletin Board.

The Jeep also came with the canvas top, doors, etc. but all that's left are some of the original horizontal and vertical bow frames. Sections of both floor pans will have to be replaced with new sheet metal as well as several other small areas along the lower tub. The hat channels under the floor do have surface rust but appear to be pretty strong. Media blasting should reveal the extent of damage. I plan on doing most of the repairs myself as time and money permits. Since my wife and I are on a limited budget (two boys in college) it may take a while to see any measurable progress. I am currently in the process of disassembling the body parts and preparing for the tub removal.

CJ3B.info with its Bulletin Board has been the perfect tool for information and advice, and is full of so many great ideas and improvements. I really admired the custom hat-channel hood reinforcement (200K JPEG) idea that Bob Christy came up with. I contacted Bob and he explained how he took the hat-channels from another hood and used them to create custom bracing on his hood.

I went on a used hood search and became acquainted with Ed Wilson from the Blue Ridge Mountain area of NC. Ed had an extra hood he was willing to let go of, so I drove up one day with some Lexington BBQ and we did a little trading. Ed is a really nice guy and his yellow Jeep was nothing short of awesome. My long-term goal for our Jeep is to restore it to its original state, then display it in some of the classic car shows throughout our state. However, what I am looking forward to most is watching my wife drive it again after all these years! 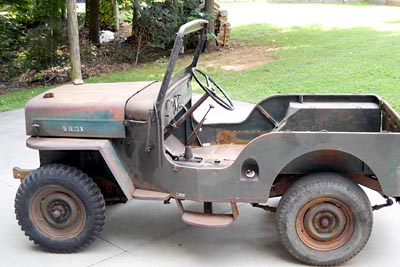 Below are a few facts about our Jeep:

Thanks for the story and photos, Greg. Let us know when the project's finished so we can visit to take some photos and enjoy some BBQ! -- Derek Redmond