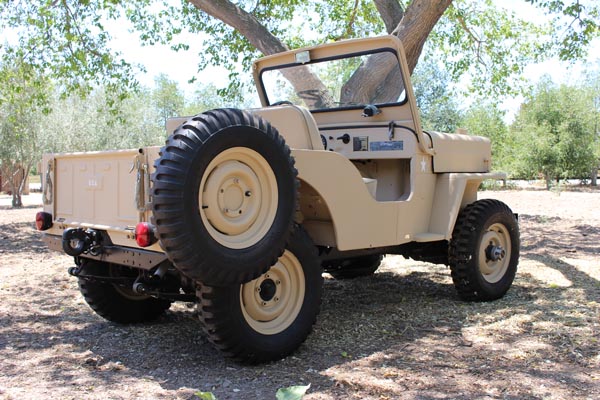 I have a CJ-5 that I drive most weekends. This CJ-3B was just a project Ineeded to do for some crazy reason -- don't need it but don't really want to get rid of it either. This is a '64 that I have owned twice since 1985, with a friend having stewardship in between my stints. 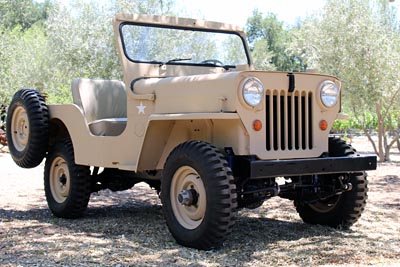 My 3B story started in the mid-80's after I found it for sale on the sideof a highway frontage road near Gorman CA. It was then 20 years old, and wasan older guy's hunting Jeep with seemingly its best days behind it. I wasyoung and paid the man the $1500 he was asking and I was on my way. Got byover the years just doing tune-up-type repairs, and had some fun with it. 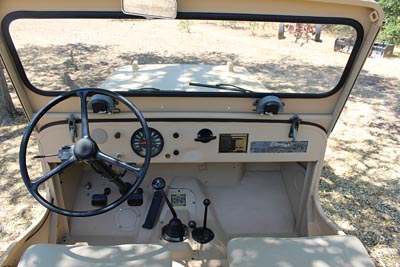 It really needed more attention ($) than I could give it, so I sold it to a goodfriend for $1500 and he had it painted and the motor rebuilt and had plentyof fun with it while his kids grew up, learning to drive and 4-wheel out inthe Mojave desert with it. Well, his kids grew up and by then it was back indisrepair and sitting on the side of his house. 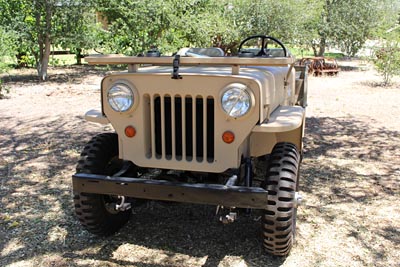 I had a need for it again in 2004 and called him up to see if he wanted to let go of it, and he did so we settled on $1500 and it was mine again! For a few years we used it at ourlake property to launch the ski boat, and my kids learned to drive in it andof course 4-wheel. 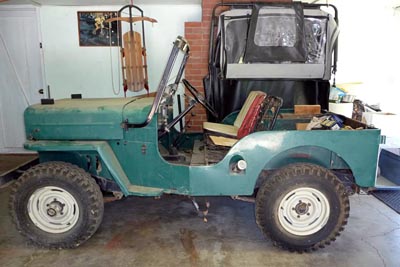 But when we sold that property it came home with us, andwas in serious need of help. It had fallen into rough shape so it was either make it right or sell it again in 2010. The motor had been rebuilt but with head bolts that were too long, and eventually the head gasket failed and coolant got into the crankcase, and sitting in this condition ruined the rebuild.

This is where CJ3B.info came to the rescue. I decided I was going to go thru it, every nut and bolt, with help from the CJ-3B Bulletin Board. 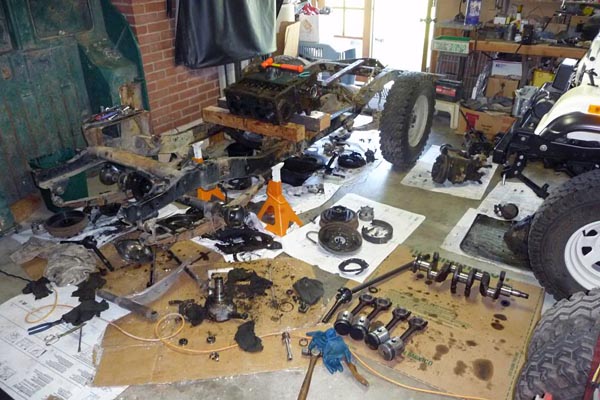 Here it is 3 days later!

Every single item was taken apart and rebuilt orreplaced, it was actually fun much of the time because I found out why itsteered so poorly when I got into every aspect of that system and why thebrakes were useless even after new cylinders and shoes, because when theengine was pulled it revealed a pinched brake line under the engine mount (160K JPEG). 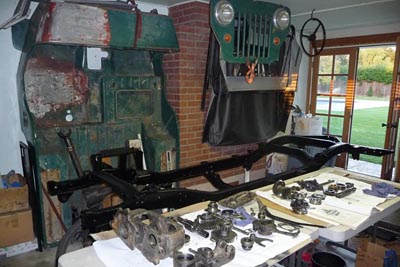 I just did what I had to do to make it work in one end of the garage, in front of the CJ-5. When I wasn't working on the tub it was on its end up against the garage wall to make room for table space to rebuild an axle or whatever. It's a bit ironicbecause I have lots of outdoor space, but it was a very wet year when I didthe rebuild, and since then we've had years of drought. 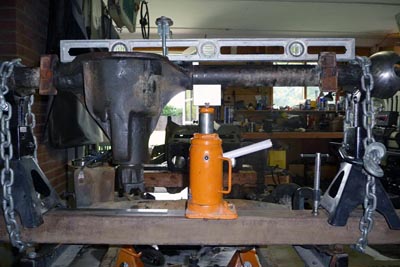 Once I had a clean frame with some weld repairs and straightening and some fresh paint, I started rebuilding parts in the order they went back on the frame. I started with straightening the front axle, while I sent off the engine to the machine shop, to have it rebuilt as a short block and then I would take it from there. 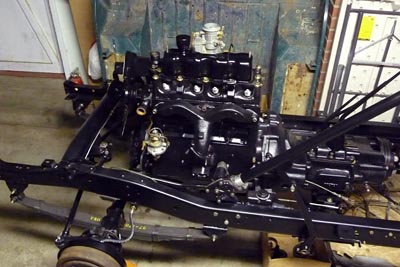 The first thing I rebuilt was the T-case and I enjoyed the simplicity and the great overall condition of it; new intermediate shaft, bearings and seals, and good to go.

Here is a picture of the start of going back together, frame straightened and all cracks welded, with many previous ugly welds ground and cleaned up, and a coat of primer and semi-gloss black. 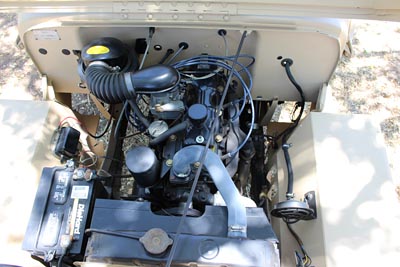 The tub was pretty rust free other than under the back of the gas tank area, and the tops of the wheelhouses where a roll bar was mounted.

One of the hardest things was finding the correct seats to replacethe early CJ-5 seats the previous owner installed and of course finding agood radiator shroud was not easy. 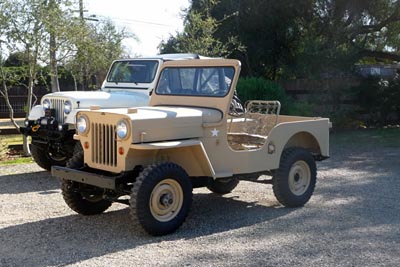 First pictures of it outside, with my white CJ-5 in the background.

I changed my intentions midway through the project, from being as close to original as possible, right down to the 3B's original color, which was also white. I decided instead to go with a non-authentic military look, just for fun. 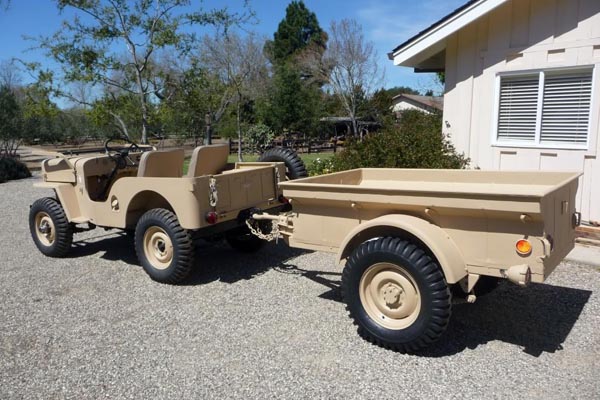 I got sidetracked with a trailer project. It's a '52 M100 Dunbar Kapple, and I was worried all along that with its 16" wheels and the Jeep's 15" wheels, it would be out of level, but it worked out pretty well. 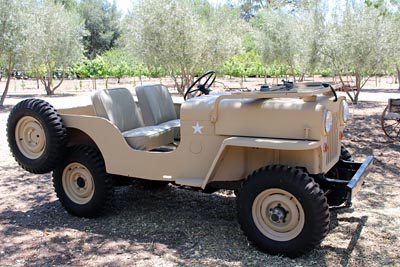 The military idea was inspired by a Jeep on CJ3B.info owned by Jim Boswell, who did his in a desert camo, and Iloved the look. With a base coat of Desert Tan I could leave it or camo over it if I wanted to. Chose to leave it. I know the true MB's, M38's, M606s etc. are an exactingrestoration process; mine was really just for fun and to honor those in the service. 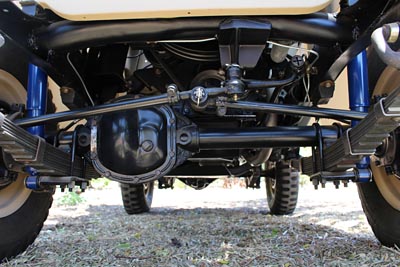 My frame and engine paint are all rattle can work. I do not have rust issues in California, and this Jeep will not go outside in bad weather anyway, so I was not too concerned about it.

This is the front underside view. See also the rear axle (220K JPEG). 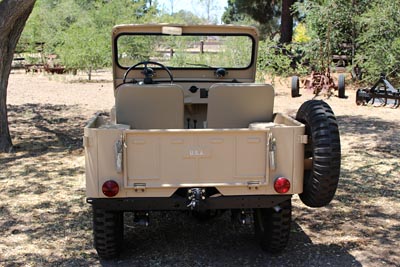 It has been a Caifornia vehicle for at least 30 years, and most of those years garaged, so I do feel pretty lucky and that is why I went ahead with this project. If it had been a real rusty mess I probably would not have taken it on.

Thanks to Alan for the story and photos. -- Derek Redmond