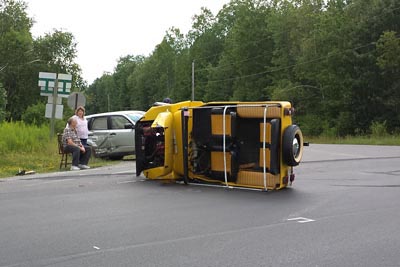 Could Have Been Worse

A couple of days after Glenn Byron had been out for the New Hampshire Trail Ride in his red 1963 CJ-3B, and sent the story below, I heard from Glenn that his yellow 1955 DJ-3A Dispatcher was heavily damaged when a Subaru took a left turn in front of him on Tuesday, 14 July 2015. Luckily Glenn was only bruised and not badly injured, despite "Miss Willy" ending up on her side. 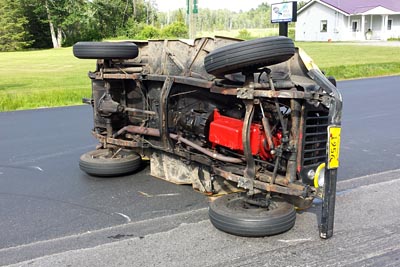 Thanks to Bud Churchill for the photos, including this shot of the underside which gives a good look at some of the features of the 2WD DJ-3A, including the I-beam front axle. 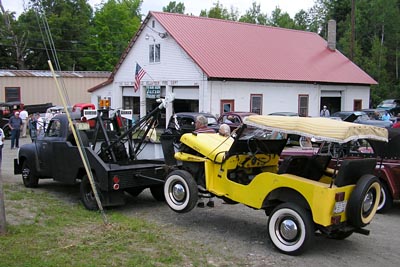 A couple weeks later, Miss Willy was a star of Smithfield's 175th Anniversary parade and car show, on the back of a nice 1964 Studebaker-Holmes wrecker (230K JPEG). The owner is searching for the side trim to two-tone the paint on the Studebaker Transtar. Thanks to Steve Towle for these photos. -- Derek Redmond 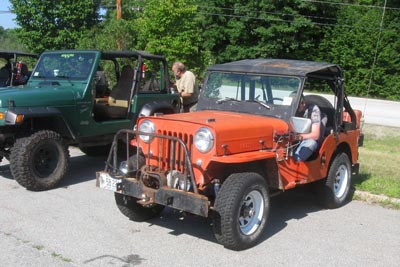 The 3rd Annual New Hampshire Trail Ride covered about 50 miles around southern New Hampshire in all types of conditions, putting our Jeeps to the test. 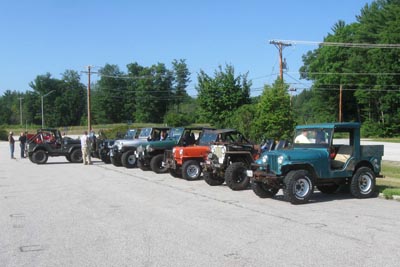 Had a great day playing with the Jeep boys. This activity has been on my bucket list a while. 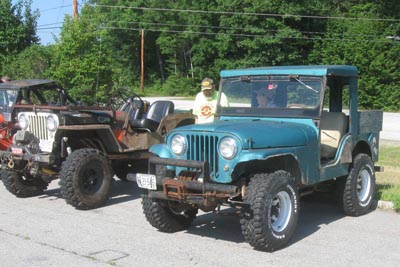 Mike and Ginny Labbe (the green CJ-5 with halfcab) joined my grandson EJ and me, in my red 1963 CJ-3B. We left Smithfield ME at 5 AM with a Dodge Ram 2500 pulling a 24' enclosed trailer with two Jeeps inside, and arrived in Hillsboro NH at 9 AM. 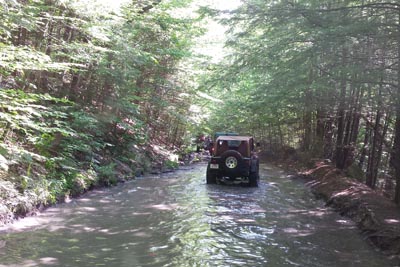 This Jeep Run is organized by local Jeepers on unmaintained, abandoned town roads and railroad beds, up mountains and along washed out ravines, an amazing route available only to licensed vehicles at your own risk. It's in the middle of heavily populated southern New Hampshire neighborhoods, but local rules keep it available from gates and bars closures. 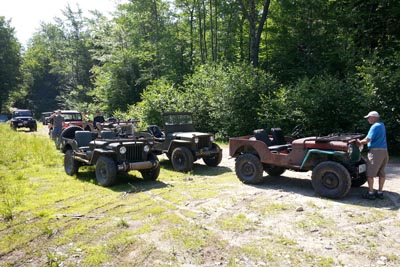 All Jeeps finished the day with only minor problems. The CJ-3B, the only one of its type in attendance, performed great on its original suspension, amongst the gang of modified Jeeps. 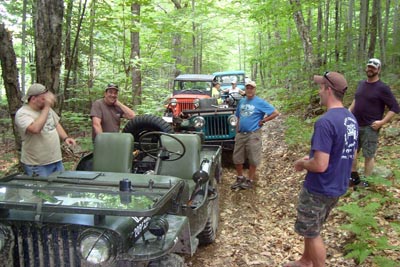 A perfect weather day made the trip much easier. Activities like this are few and far between in our restrictive world today.

There were very few Jeeps with stock suspension, but mine got through the day with only exhaust damage and clutch wear due to high gearing over very rough terrain. 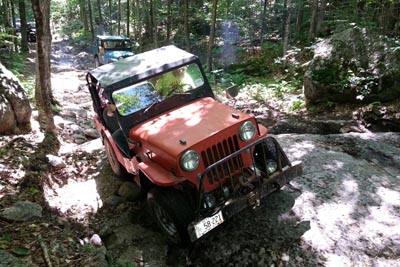 Our CJ-3B from the Rocky Mountains proved she can play with the big dogs, but we had exhaust pipes too low, and mangled them as we scraped and slammed along several very challenging glacier gulches. A visit to an exhaust pipe bender is in order, as a stock exhaust will not work around the PTO driven winch. (This problem has already been addressed here on CJ3B.info -- this looks like a very doable cure / repair. Let's see if I can get it done before the next Trail Ride.) 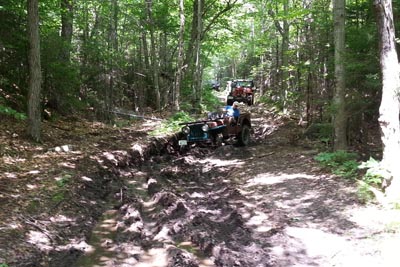 We didn't have to winch out of any problems, but the higher gears of the CJ-3B challenged the clutch heavily. 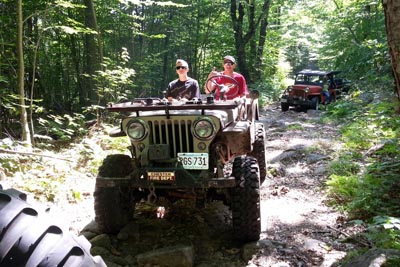 It was especially fun to be around some younger enthusiasts enjoying a world usually populated by old farts like me. My grandson, EJ, had never been into anything like this, and really enjoyed seeing these antique Jeeps in their natural environment. 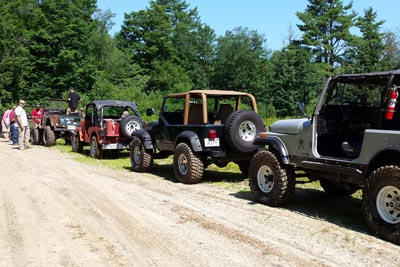 A very long day ended as we arrived back in Smithfield at 9:30 pm, a tired bunch.

The photos of the Trail Ride are courtesy of Craig Brown at CertifiableJeep.com, and Ryan M. and MassCJ2A at the CJ-2A Forum.

Thanks to Glenn for the story. See also Three Bees in Maine, Glenn's '58. -- Derek Redmond