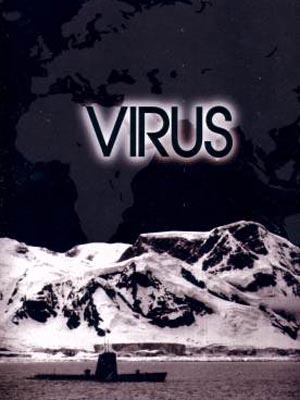 When I first saw this film called Virus (along with a couple of others on a DVD called "Classic Disaster Movies") I was puzzled. It looked like a bad B-movie, but it had a big cast of well-known actors and a fascinating but confusing plot about a military-engineered virus that wipes out most of the world's population, followed by a nuclear showdown between west and east. Eventually only 8 women and 800 men in Antarctica are left alive.

I did some research and it turns out this was a big-budget 1980 Japanese production (original title Fukkatsu no hi or "Day of Resurrection") with international stars, shot mostly in Canada and Alaska. Much of the dialogue in the original 156-minute version was in English, but there was a parallel plot in Japanese. Apparently the American distributor decided the Japanese scenes should be cut out, and the resulting fragmented 108-minute version was unsuitable for theatrical distribution, so it was sold straight to TV and then showed up on poorly transferred VHS and DVD.

An excellent review of the film at gotterdammerung.org gives a sense of the scope of the story in the original widescreen version of the film, and includes a number of photos (but no Jeeps). 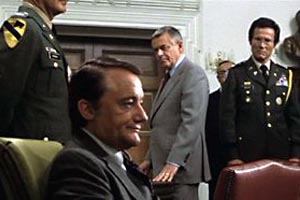 As the virus spreads around the world in the first half-hour of the film, Glenn Ford as the U.S. President is advised by Robert Vaughn in the Oval Office. The cast also includes Chuck Connors, Olivia Hussey, George Kennedy, Edward James Olmos and Bo Svenson. 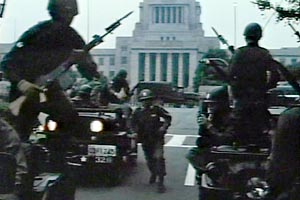 Mitsubishi military CJ-3B Jeeps show up in a sequence that begins with the title "Japan Under Martial Law." Japanese soldiers do a lot of leaping from Jeeps with bayonets fixed. In the montage seen below, troops pile infected bodies in the street and set them on fire with flame throwers.

Click any of these frames to see a larger copy (50K JPEG).

Unfortunately these stills come from the short video version of Virus, which has poor quality picture, and sound that one writer says is "like an 8-track in a noisy '68 Pontiac." Most reviewers advise staying away from it and waiting for a chance to see the full-quality, full-length version. It's currently available only on a Japanese DVD, but maybe its cult status will eventually result in the release it deserves in Europe and North America. -- Derek Redmond