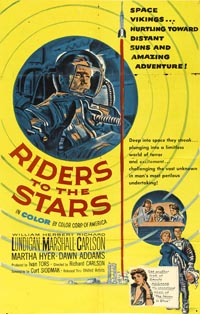 The year was 1954. Sputnik would not be put into orbit by the Soviet Union until 1957, so the space race had not yet passed the starting line, but there was a great deal of interest and speculation regarding space exploration. Meanwhile on earth, the newest Universal Jeep model was still the CJ-3B, and when Ivan Tors Productions in Hollywood planned a science-fiction film about the first manned space flight, Willys Motors was probably eager to supply a couple of 3B's to appear in the movie.

The plot of Riders to the Stars involves a group of scientists, including Dr. Richard Stanton (William Lundigan) and Dr. Jerry Lockwood (Richard Carlson), who are recruited for a secret project. They undergo a series of rigorous physical and psychological tests, during which Stanton is attracted to the beautiful Dr. Jane Flynn (Martha Hyer), one of the testers. 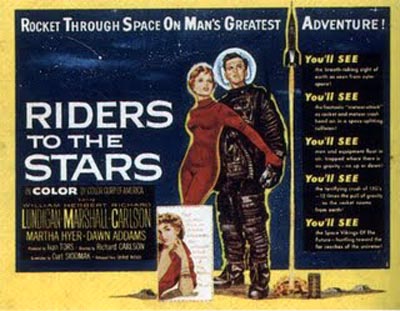 The project turns out to be an effort to catch a meteor before it burns up in the atmosphere. It has been discovered that even the best quality steel turns brittle in outer space, and since meteorites are not subject to the same problem, scientists want to find out how their "outer shell" protects them. For this purpose, they need to send astronauts into space, something that has never been done before. 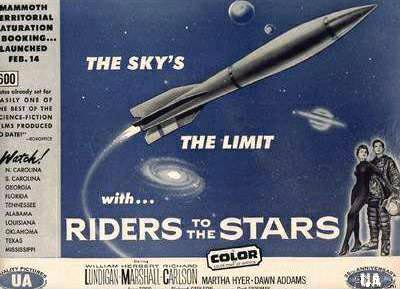 The slogan "The Sky's the Limit" actually refers to the money-making potential of the movie, in this ad aimed at theatre owners. United Artists clearly had high hopes for the first film directed by actor Richard Carlson, who was also appearing in It Came from Outer Space (1953) and Creature from the Black Lagoon (1954). The script was written by Curt Siodmak whose many sci-fi films included I Walked with a Zombie (1943).

In the film's climax, three one-man rockets are sent into space to intercept a meteor swarm. One ship is destroyed in a collision with a meteor, and Lockwood (Carlson) suffers a mental breakdown and zooms away from the Earth. Stanton captures a meteor, manages to survive a crash landing, and is rewarded with a kiss from Dr. Flynn. 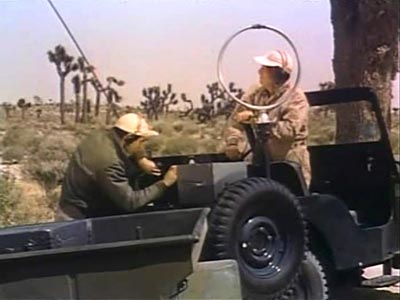 Curt Hickman and his wife Connie saw the movie in October 2009 on the Turner Classic Movies channel in the U.S. and he told me about the appearance by two CJ-3Bs. It's the opening sequence, where the Jeeps track the re-entry and crash landing of an exploratory missile. 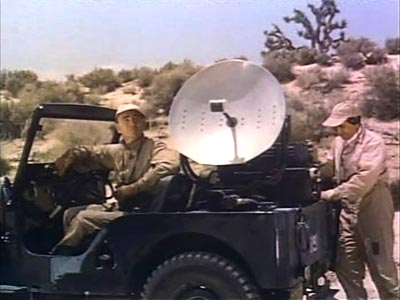 One Jeep has a rotating radar dish (right) and the other a radio direction finder (above). But when they detect the radio signal from the missile's payload, they don't seem to be concerned about delicate equipment as they roar off across the desert. 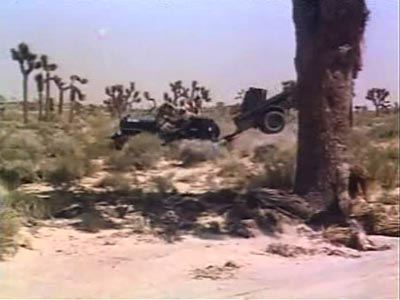 Curt says, "Maybe some of the best action-packed 3B driving in movie history. Caught me totally by surprise. Scientists racing two high hoods across the California desert, towing Jeep trailers packed with scientific equipment. As the Jeeps negotiate tough terrain, the apparatus flies from the trailers and is strewn all over the high desert in the race to get to a missile crash site." 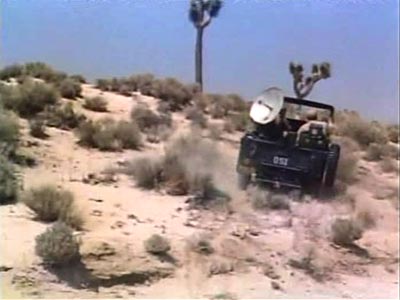 Both Jeeps have "OSI" stencilled on the tailgate and hood, meaning "Office of Special Intelligence."

The radar dish is still rotating 360 degrees in the back of one Jeep as it takes a questionable diagonal line up a sandy hill. 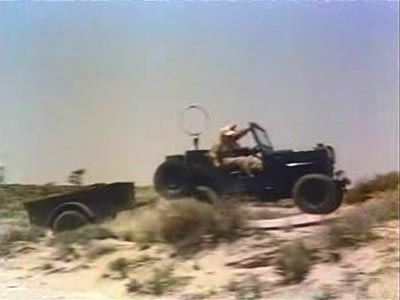 The driver of the Jeep with the trailer is a bit more agressive, and gets some air as he takes a more direct line up a hill. 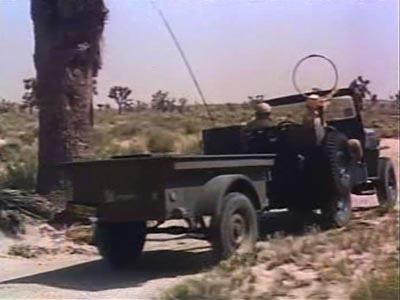 Curt says, "This movie is a must-get if you can find it. Simply for the three minutes or so of two high-hoods screaming across the desert. They looked brand new."

Yes, they do look brand new, although repainted in black. The Bantam trailer, on the other hand, appears to be a World War II surplus BT-3. 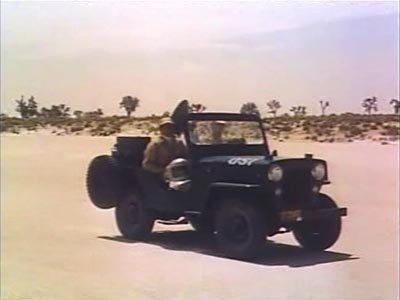 Riders to the Stars is sometimes described as a black & white film which was later colorized for video distribution, but the advertisements above state that it's in color. And one color detail that is unlikely to have been colorized later is the black and yellow 1953 California license plates.

It's a good bet that Willys supplied the vehicles at no charge, to take advantage of the exposure in a movie about state-of-the-art technology. Speaking of "exposure," here the passenger has his anti-radiation helmet ready in case the payload is radioactive. 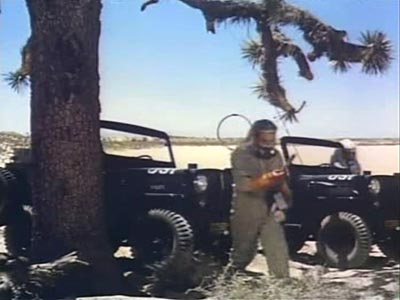 He puts it on and pulls out a geiger counter when the Jeeps find the small box (50K JPEG) which parachuted to safety before the missile crashed. 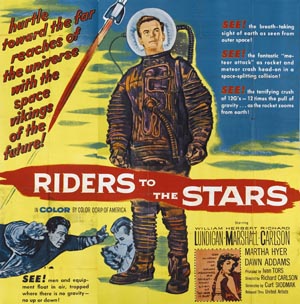 Contributors on the Internet Movie Database point out that the basic "scientific" premise of the film, that cosmic rays crystallize and pulverize metal and other materials in space, is completely erroneous, a fact that was well known at the time of the movie's release in 1954. 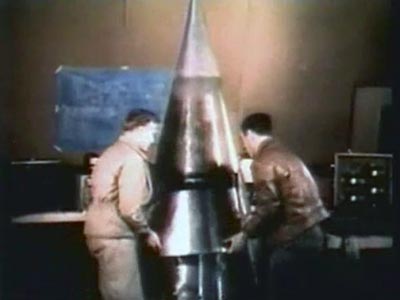 They also comment on the special effects, consisting of cheap models on strings, and stock footage of U.S. military V-2 rocket tests. One writer says, "Usually, I can overlook low-cost effects, but these are so cheap that the film suffers somewhat as a result. But note the dialogue, the human interactions, and most of all, the sense of mission and wonder on the part of the team that needs to pave our way to the stars. Then think about the fact that this was made years before Sputnik." 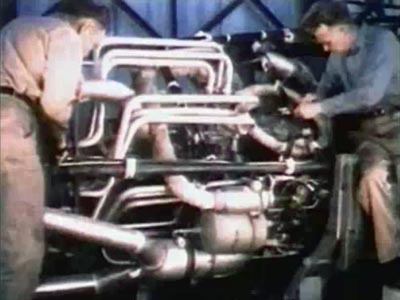 Moria comments, "Certainly, Riders to the Stars is made with an absolute conviction in itself. Richard Carlson directs with a sense of almost documentary-like realism. He has, for example, gone and shot in a real centrifuge, cuts in real rocket launch footage, and seems to be using real scientific equipment in the background, which is notable over the usual flashing lights that stand in for equipment in science fiction of the same era."

Yes, these scenes of the scientists preparing the rockets actually remind me of a couple of Jeepers out in the garage working on a CJ-3B.

Thanks to Curt Hickman for drawing this classic film to our attention. -- Derek Redmond