The 1960 heist film Ocean's 11, starring Frank Sinatra and the "Rat Pack," became popular again as a result of the success of the 2001 remake. The new version has the edge in acting and suspense, but the original has some unique features including one of the most primo CJ-3Bs I've seen on the big screen. It's a vehicle of the Clark County Sheriff's Jeep Posse. Not exactly the Rat Patrol though;   instead of jumping the dunes, it's only seen parked outside the Dunes hotel.

As Sammy Davis Jr. slips through a police roadblock the morning after the big heist, driving a garbage truck, the CJ-3B sits in the background ready for action. The '59 Ford (foreground) and '59 Olds cruisers look better prepared for any high-speed chase that might develop, but the Jeep looks better equipped in case somebody runs out of gas and needs a push....

The Jeep is also glimpsed at the roadblock during the night (below) while power to the casino is blacked out, and a Caddy passes in the foreground. In this shot you can see the "Sheriff's Jeep Posse" lettering on the hood, and what appears to be a loudspeaker mounted at the top of the grille.

"The Sheriff's Department did not have enough personnel to perform all the rescues around the 8,000 square miles in Clark County so they would use the volunteers to help out. These people became very skilled in their rescue techniques and were recognized throughout the country. They were all deputized as Clark County Sheriff's Deputies and carried credentials identifying them as members of the Department. Their vehicles were painted Black & White with red lights and sirens. It was not uncommon for them to respond to a rescue with lights and siren."

Thanks to Mark Browder on Flickr for these early-sixties photos of the Jeep Posse. The CJ-3B in the photo above appears to be the same Jeep that appeared in the movie, minus its hardtop. 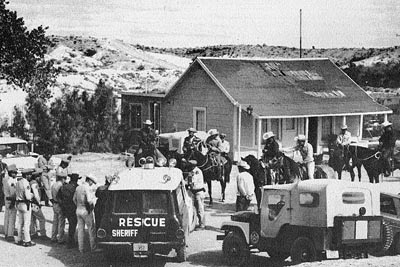 Dennis Larsen also provides the recent history of the Posse: "In the 1980's the Clark County Sheriff's Department was no longer in existence and the members of the Jeep Posse were under the control of the Las Vegas Metropolitan Police Department's Search and Rescue Section. Due to liability concerns they were disbanded and the department created a volunteer Search & Rescue unit. They are still involved in all search and rescues that take place in Clark County and even our neighboring states, but they are no longer commissioned police officers, and do not drive marked personal vehicles." 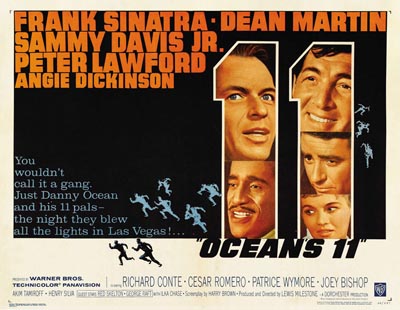 It's interesting to see the smaller but more glamorous Las Vegas of 1960 in Ocean's Eleven, very different from the sprawling family resort city with many huge hotels, which it is today. The Vegas of that era had only a few casinos -- and it had CJ-3Bs in the Jeep Posse. "How cool baby, as Frank (Ol' Blue Eyes) would say!" comments Jim Veen, who spotted the Jeep in this film.

Michael Coy at the Internet Movie Database describes the Ocean's 11 story: "Sketchy and virtually irrelevant, the plot concerns a bunch of paratroopers-turned-playboys who, craving money and thrills, mount simultaneous burglaries of five of Las Vegas' big casinos. The slackness of the plotting is part of the film's relaxed, tongue-in-cheek style as Sinatra and Dean Martin indulge themselves in what is almost a home movie." 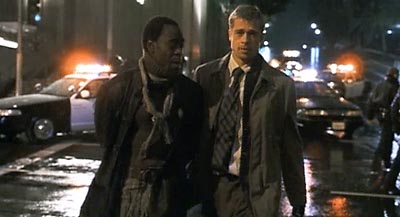 The 2001 remake stars Brad Pitt and Don Cheadle, with George Clooney as Danny Ocean. A reviewer at Crazy for Cinema said, "Though I'm usually a sucker for the classics, I think Clooney and company out-cooled the Chairman and his cronies. I expected the 1960 pic to have class and style. Unfortunately, it doesn't have much of either... which makes the thin plot and phoned-in performances even harder to watch. It's Frank's mystique and power that got this film made, giving the boys something to do to fill their downtime while they performed in Vegas."