A B-Jeep in a B-Movie 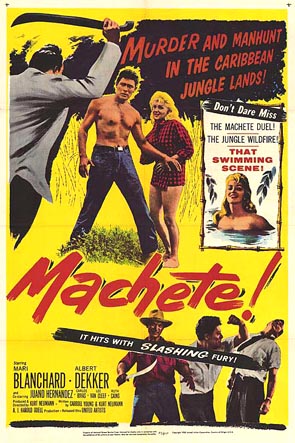 One of the unexpected pleasures of tracking down the occasional appearances of CJ-3B Jeeps in Hollywood movies, is stumbling onto the almost-forgotten stories of the people who made some of these almost-forgotten films.

For example, here's a movie I'd never heard of, but which is actually somewhat of a landmark in my profession of cinematography. And it was one of the career highpoints for an actress who was better known for her romances than her movie roles.

Machete! (1958) was one of the last films photographed by pioneering cameraman Karl Struss (who won the first Academy Award for Best Cinematography in 1927, for the film Sunrise.) Struss had been collaborating regularly with director Kurt Neumann in the 1940's and 50's, including on the original 1958 version of The Fly. When Neumann died shortly after the premiere of The Fly and prior to the release of Machete!, Karl Struss retired from photographing feature films, and for the remainder of his career shot only television commercials. 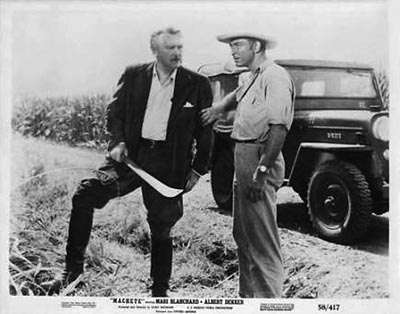 Albert Dekker (left) starred as Don Luis Montoya, the wealthy, elderly sugar plantation owner who returns from New York to Puerto Rico with his young bride Jean. Lee Van Cleef (right) played the villain as usual, in this case Luis' cousin Miguel who stirs up trouble by telling Luis that his young wife is involved with Carlos, the handsome plantation manager.

I haven't seen the film yet, but Federico Cavedo found this production still which shows a Willys CJ-3B, so the Jeep probably also appears in the film.

The other star billing in the film went to Mari Blanchard (100K JPEG) as the young wife Jean. Mari Blanchard's interesting life is summarized in Glamour Girls of the Silver Screen, which describes how she contracted polio at the age of 9 in 1936, then swam daily for years, to exercise her once-paralyzed limbs. After running away to join the circus, she studied law at UCLA and USC, meanwhile also pursuing a modelling career. In 1948 she was spotted by cartoonist Al Capp and became the inspiration for Stupefyin' Jones (80K JPEG) in his L'il Abner comic strip, and then was signed by Paramount in Hollywood.

About the time that Willys unveiled the CJ-3B Jeep, Mari Blanchard was chosen "Miss Click of 1953; the girl we'd most like to train our lens on," by the Hollywood Cameramen's Guild. She became a gossip column staple, linked to single and married Hollywood men including George Raft and Mel Tormé. She mostly landed guest spots on TV series, but her movie roles also included She Devil (1957) and McLintock! (1963). Unfortunately she died of cancer in 1970 at the age of 43.

A review by John Howard Reid at imdb.com says that "The script of Machete! is remarkably silly, even though it does offer Miss Blanchard the chance to play the femme fatale enthusiastically. Alas, the rest of the players are wasted; and a number of gratuitous musical numbers do little to enliven audience interest. On the other hand, the location photography by Karl Struss is a definite asset."

And of course a high-hood Jeep appearance is also always an asset. I'm looking forward to finding a copy of the film.

Thanks to Federico Cavedo for spotting this. -- Derek Redmond