Picnic and The Long Hot Summer 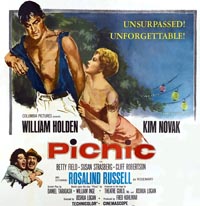 This 1955 movie based on the play by William Inge won a couple of Oscars, and was a great vehicle for romantic leads William Holden and Kim Novak. As the tagline on one movie poster (120K JPEG) stated, "From the moment he hit town she knew it was just a matter of time."

Coincidentally, the musical theme from Picnic is mentioned elsewhere on CJ3B.info.

The film was shot on location in Kansas, and in 1955 Kansas it should be just a matter of time until we see a CJ-3B. And Keith Hepper spotted one at the beginning of the big Labor Day picnic which is the centerpiece of the film. It's just visible in the frame enlargement below.

With a bunch of kids gathered around the tailgate, it looks a bit like a scene from a Willys Reunion, but in this case the attraction is a small donkey in the back of the Jeep. Hard to identify as a CJ-3B in this picture, but in the movie the camera moves around slightly so we can glimpse the high hood at the end of the shot. 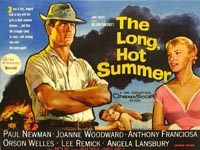 Another summer soap opera which came out right in the middle of the CJ-3B era featured a Jeep more prominently, but it was actually a CJ-3A. The Long, Hot Summer, directed by Martin Ritt in 1958, was based on stories by William Faulkner.

A synopsis written by Lisa Grable for the Internet Movie Database describes some of the plot: "Ben Quick (Paul Newman) arrives in Frenchman's Bend, Mississippi after being kicked out of another town for allegedly burning a barn for revenge. Will Varner (Orson Welles) owns just about everything in Frenchman's Bend and he hires Ben to work in his store. Will thinks his own son Jody (Anthony Franciosa) who manages the store, lacks ambition, and despairs of him getting his wife Eula (Lee Remick) pregnant. Will thinks his daughter Clara (Joanne Woodward), a schoolteacher, will never get married. He decides that Ben Quick might make a good husband for Clara, to bring some new blood into the family."

At one crucial point in the film, Will himself escapes from a barn fire, and races back into town in his Jeep. Click each frame here to see a larger copy (40K JPEG).

The CJ-3A has a grille screen on the front, and a spare tire mounted on the tailgate rather than the passenger side. It leans as it rounds the corner from a dirt road onto the highway, with the substantial weight of Orson Welles in the driver's seat. He swings so far out into the wrong lane of the highway that he runs a blue Chevy pickup off the road.

Location sequences for The Long, Hot Summer were filmed in Clinton, Louisiana, north of Baton Rouge and near the Mississippi line. (Five years later, Lee Harvey Oswald, who would shortly assassinate John F. Kennedy, appeared in the town, according to several witnesses in the conspiracy trial of Clay Shaw.)

Even the brief scene here gives an evocative look at a small town in the southern U.S. in the fifties. As the Jeep pulls onto the concrete pavement of the main street, the variety store and the Esso station are visible in the background, along with the Chrysler dealership (which probably found itself selling Jeeps three decades later).

An odd detail, perhaps not as mysterious as the Oswald sighting, is that as Will Varner is about to pull up in front of his store, a truck identical to the blue truck he ran off the highway, passes him going in the opposite direction again.

Return to The CJ-3B in the Movies on The CJ3B Page.