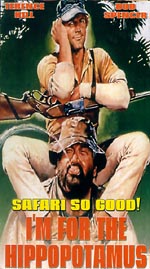 This film directed by Italo Zingarelli is one of a series of some 18 movies made by the comedy team of Bud Spencer and Terence Hill, who were extremely popular in Europe. The two actors were both in fact born in Italy, and changed their names after beginning their careers.

The title of the film, originally Lo sto con gli ippopotami in Italian, has been translated into most languages as "The crocodile and his hippopotamus," but was modified into I'm For the Hippopotamus for its English release.

Terence and Bud play two brothers in South Africa who team up to stop a villain whose gang is poaching ivory tusks and wildlife for foreign zoos.

There's lots of slapstick humor in the movie, including a jailbreak involving a bulldozer, and a number of entertaining fight scenes worthy of the Three Stooges.

The best Jeep scene occurs early in the film, as safari tour operator Tom takes his clients out in a CJ-3A to shoot hippos. His brother Slim, conservationist and animal lover, doesn't realize Tom has given the tourists only blanks. He takes aim and shoots out the Jeep's front tire. Tom loses control and in a great one-shot stunt, drives the Jeep headlong into the water with a huge splash.

Bud Spencer comes out of the water still holding the steering wheel, in the shot that's the inspiration for the movie's poster (above). Maybe driving into a lake could be a new technique for solving the perennial problem of how to remove a Willys steering wheel from the steering column. 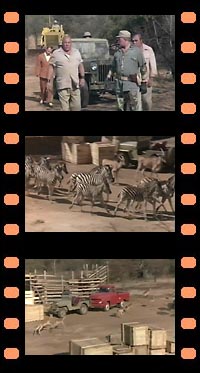 Later, Tom and Slim's common interest in preserving wildlife leads them to take on the nasty Jack Ormond (played by Joe Bugner, former European and Australian heavyweight champion). Ormond's heavies travel in a CJ-3B as they try to drive the villagers off their land.

At the end of the film, as scores of animals are loaded into a boat for export to "Ontario, Canada" (home of CJ3B.info,) the brothers sneak aboard, set the animals free, and toss the gangsters into the water in a final fight scene. The zebras, gazelles, etc. sprint ashore and into the jungle, past the villains' CJ-3B and mid-fifties Ford pickup.

I'm For the Hippopotamus has a nice ending and a great opening, but I'm not sure that I would recommend the rest of the film very highly to a North American audience.

Thanks to Gerald Heissig for spotting the CJ-3B in this film. -- Derek Redmond