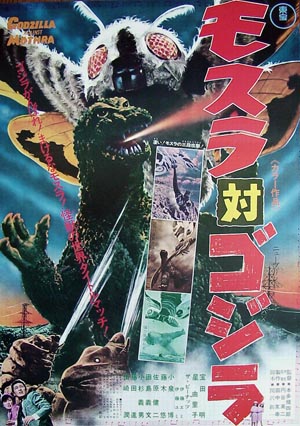 Mosura tai Gojira, produced by the Toho Company in Japan in 1964, was known in English as both Mothra vs. Godzilla and Godzilla vs. Mothra. For the original English release, American International Pictures was probably worried that people wouldn't think a giant moth sounded scary enough, so the title was changed to Godzilla vs. the Thing. On the poster in English (230K JPEG), the mystery monster was hidden (except for very un-mothlike tentacles) but a Jeep was included.

Many people consider this one of the best Godzilla movies, possibly even better than the 1954 original. And it's also notable for being the last film of the original series, in which Godzilla was totally the bad guy. 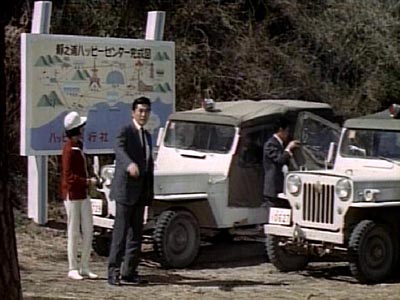 Godzilla starts stomping Tokyo after being disturbed by a developer building luxury condos. The Japanese military can't do much, even with the help of the U.S. Navy in the American release version. So it's up to the mystical giant moth Mothra to deal with the monster, whose rubber costume and special effects are quite fearsome in this film.

There are a few Mitsubishi Jeeps around 1964 Tokyo (see a CJ3B-J3 with a Nissan Pathfinder, 60K JPEG), but the most interesting ones are these police Jeeps. 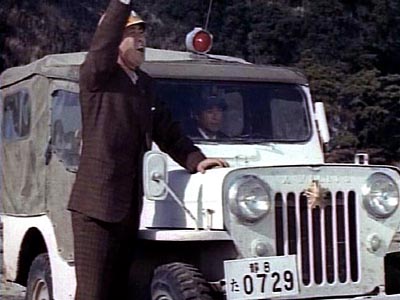 The police vehicles are Mitsubishi CJ3B-J3's, which were built from 1953 into the 1970's. The Willys name and the Mitsubishi triangle are both stamped into the front grille. It's not clear how those red lights are attached to the canvas tops....

See also another shot of this Jeep (60K JPEG).

And if you get the urge to watch an old Godzilla film, this might be the one to rent if you want to scare the kids (see the trailer at IMDB.com.) But if you want the most laughs, try the movie below. 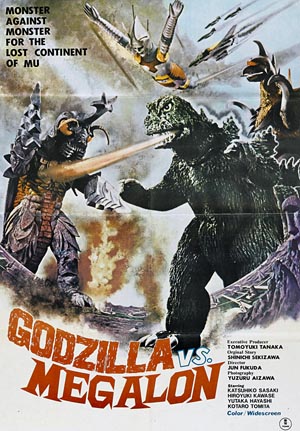 Gojira tai Megaro (Toho Company, 1973) is generally considered one of the worst of the Godzilla series. A user on the Internet Movie Database commented, "One couldn't make a parody of the Godzilla films as funny as this; yet, incredibly, there's no sign that this was not intended to be taken seriously." But another reviewer adds, "Look guys, this Godzilla movie was clearly made for children. Judging this movie against the darker and more mature films in the series is clearly missing the point."

The consensus of course is "So bad it's good." One fan concluded, "A great movie, hilarious fight scenes. I recommend the movie to anyone, you'll love it! One of the best monster fights ever put on film!"

The film was clearly shot and edited very quickly, and fans of the genre have noticed that the military vehicle shots are taken straight out of earlier monster films, in particular Toho's War of the Gargantuas (1968) which is where this convoy of Jeeps comes from.

The Jeeps carry mostly "maser" weapons, from which soldiers with white gloves can fire blasts of amplified electromagnetic radiation. One of the Jeeps has an unusual feature in the form of some kind of fairing stretched over the cowl. Unfortunately it's difficult to see; one frame provides a slightly closer look (30K JPEG).

The masers are no more effective against Megalon than the good old 106mm rifle carried on this J4 with extended rear box, from War of the Gargantuas. So it's up to Godzilla and the robot Jet Jaguar to save Japan by taking on the giant cockroach Megalon and his sidekick Gigan from outer space, in the climactic battle seen on the poster. 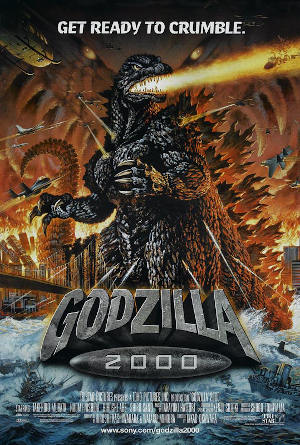 The two photos above show what is probably a Mitusbishi J54A military Jeep, a diesel-powered version of the CJ-3B built in the late 1960s and early 70's. Later in the film, the newer Jeep seen here makes some appearances; it looks like a J24A, built in the 1970's-80's.

Ed Freniere spotted the Jeeps in Godzilla 2000 and commented, "As for the movie, it is classic Godzilla, updated for the 1990's, complete with low-budget special effects. I found myself wearing a wry smile throughout the movie. As they say, it's so bad it's good." 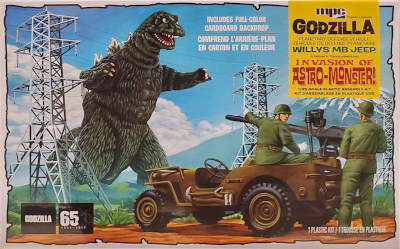 In 2019 MPC (Model Products Corporation) released its World War II Willys MB plastic model as a "planetary defense vehicle... featured in Invasion of Astro-Monster." That film was the sixth in the Godzilla series (released in Japan in 1965, but not in North America until 1970, under the title Monster Zero) and it did feature MBs (80K JPEG) rather than Mitsubishi Jeeps. The model kit included a cardboard backdrop (150K JPEG).


Thanks to the Internet Movie Cars Database for photos. -- Derek Redmond

Last updated 6 May 2021 by Derek Redmond redmond@cj3b.info
https://cj3b.info/Movie/GodzillaMothra.html
All content not credited and previously copyright, is copyright Derek Redmond