CJ-3B Baggage Jeep in the Movies 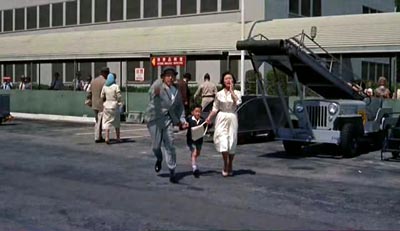 Plenty of CJ-3Bs seem to have been built as "Hoveyor" airport baggage loaders (see Building Conveyor Belt CJ-3Bs on CJ3B.info.) Here's a glimpse of one in Geisha Boy, a 1958 comedy in which Jerry Lewis plays second-rate magician Gilbert Wooley. Sent with his white rabbit sidekick Harry Hare to entertain U.S. troops in the Pacific, Wooley ends up befriending a little boy in Japan.

(For a look at the other end of a Hoveyor, see the movie Pepe.) 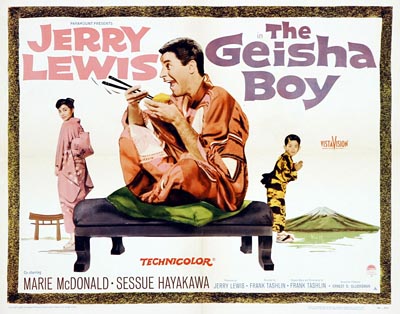 One reviewer on imdb.com says, "This is one of Jerry Lewis' best films. Not only is it incredibly funny, but it evokes compassion (Mr. Wooley's relationship with the young boy is touching) without being too sentimental. The Japanese setting is beautiful and exotic, and Miss Kimi is lovely and charming. No wonder Mr.Wooley prefers her to the cold American Sergeant Pearson (Suzanne Pleshette's first role.) This is a great family movie, and I highly recommend it to anyone who wants good comedy with a touch of tenderness in it. It ranks right up there with The Nutty Professor (1963)."

(See a Jeep in The Nutty Professor in Surrey Jeeps in the Movies on CJ3B.info.) 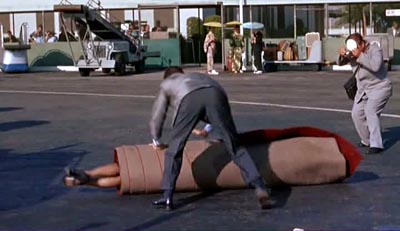 Geisha Boy was actually shot entirely in Los Angeles, so this baggage loader is likely at LAX. Wooley is wrapping a famous actress up in the red carpet here, after accidentally tearing most of her clothes off. Another famous scene is a baseball game with the L.A. Dodgers including Duke Snider, Gil Hodges and Pee Wee Reese.

The film was written and directed by Frank Tashlin, a comedy specialist who in addition to a bunch of movies with Jerry Lewis, also made Son of Paleface (1952) for Bob Hope, The Girl Can't Help It (1956) with Jayne Mansfield, and The Man from the Diners' Club (1963) with Danny Kaye. 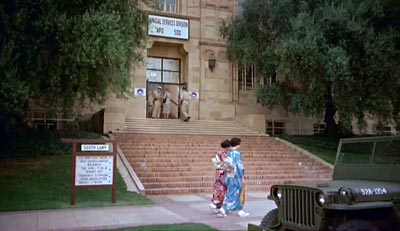 Another shot in the film includes an MB, which could quite possibly still have been in use by the U.S. Army in Japan in 1958. A reverse angle shows the whole jeep, and in the background a Volvo PV444 (40K JPEG), a classic design that, like the Universal Jeep, lasted from World War II into the 1960s virtually unchanged. 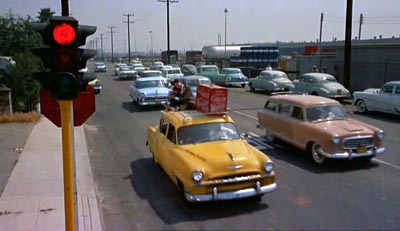 Many films from the 1950s include streetscapes full of cars that now seem exotic, and Geisha Boy is no exception. Here's the practical (and some would say beautiful) 1955 Nash Rambler Cross Country station wagon. The front wheel wells had just been opened up by the stylists, to make it look less like a bathtub. And the Nash Rambler name had just become part of the new American Motors Corporation, as would eventually also happen to Jeep when Henry Kaiser sold that name to AMC.

Thanks to Vilero for the frames from the film. -- Derek Redmond