Ezhunnallathu is a 1991 Indian film in the Malayalam language, directed by Harikumar and starring Jayaram Subramaniam, who is famous in India as simply Jayaram. He has starred in over 200 films, mainly in the Malayalam language. Although Hindi and English are the official languages of India, Malayalam is one of 20 other recognized languages in the country, and has official language status in the southwest state of Kerala. It is spoken by some 38 million people. (Wikipedia) 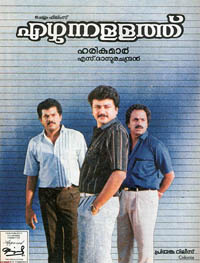 There were no subtitles on the copy I saw on YouTube, so I have absolutely no idea what happens in this movie, except that Jayaram and his two buddies drive around in his Willys CJ-3B and talk with various other characters. The poster (right) doesn't offer too many clues, and there seems to be no information online, probably because of the language barrier. The title Ezhunnallathu means "ceremonial procession" in the Malayalam language, but there are no processions in the film, so that doesn't help explain anything.

Ezhunnallathu is over two hours long, and there are only a few of the songs which sometimes liven up Indian films. So, all in all, I would suggest just browse through the stills I have collected here, and give the film itself a pass. -- Derek 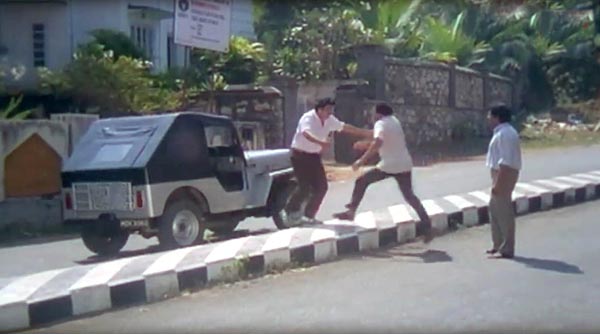 The movie starts pretty slowly; the only action other than dialogue, is when the police show up at Jayaram's house and toss him in jail briefly.

About a third of the way through, we finally see him driving in his Willys 3B, probably one of the Jeeps assembled in India by Mahindra in the 1950s. It has new taillights and tailgate, and a slick fastback vinyl top. Jayaram sees a couple of friends, and invites them to hop in. 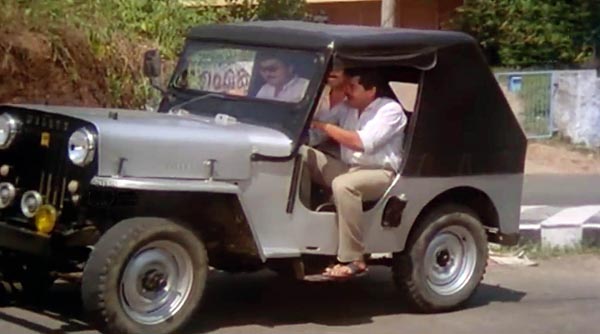 As you know, three people in the front seat of a Willys is a tight squeeze. But it's right-hand-drive, so this guy is not driving with his clutch foot hanging out the door.

A clue to the Mahindra assembly of the Jeep is the cowl-mounted windshield wipers (one of which is missing.) 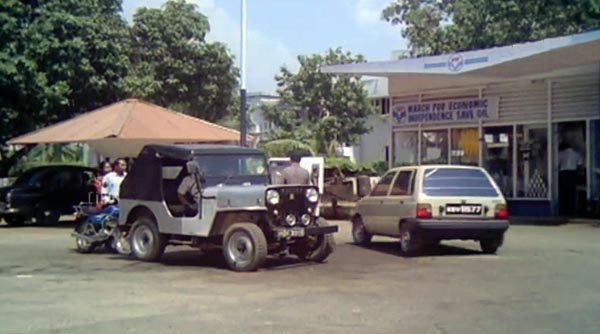 When he pulls into a petrol station, an amusing Willys sub-plot begins. The fog lights on the front bumper, seen in the previous scene, have disappeared, leaving only the two auxiliary horns, a useful accessory in India. 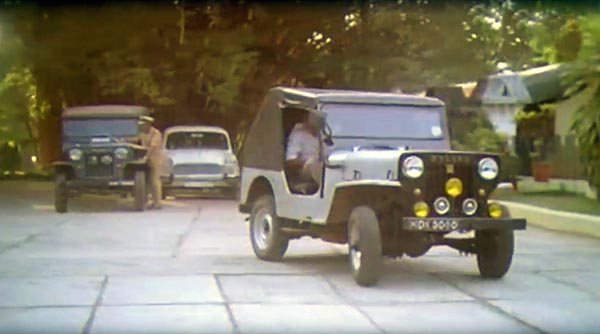 But not long after, the two fog lights have re-appeared, along with a third one in the center of the grille. You get the feeling this film took a long while to shoot, and the Jeep was borrowed from somebody for the purpose.

As Jayaram parks, he spots a policeman with his Mahindra Police Jeep, which also has dual horns on the front. 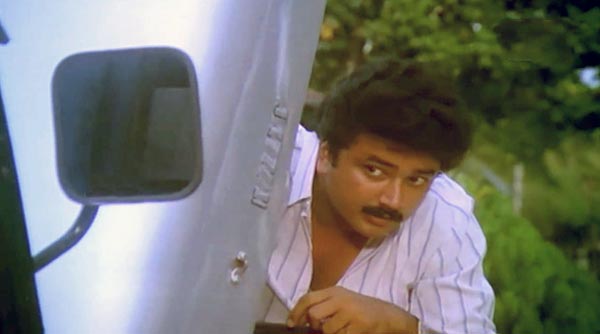 It's the same cop who arrested him earlier, so Jayaram is wary. 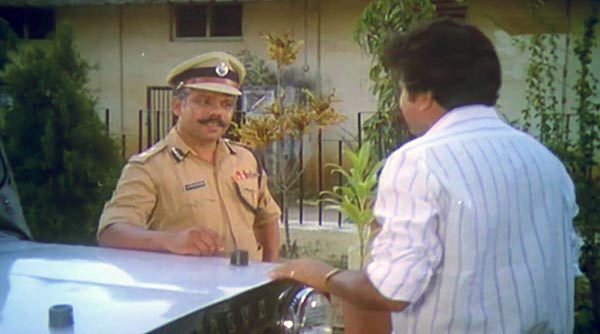 The cop spots him too, and Jayaram seems nervous as they have some words. 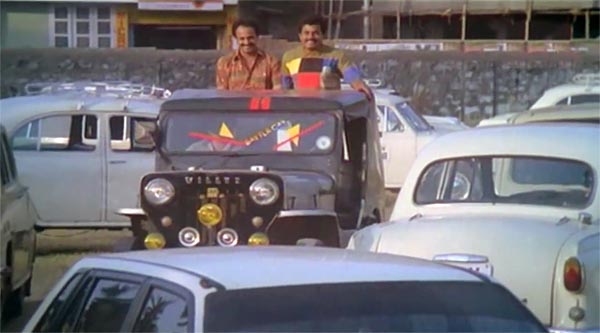 But before long, the three buddies are driving around again, spending time at the beach and at the fairgrounds. The Jeep somehow picks up some decorations. 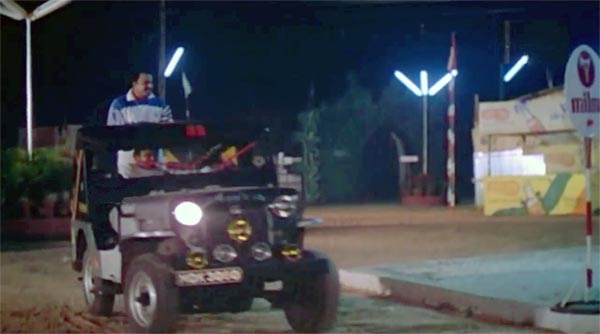 When they head home that night, you have to chuckle when you see that out of all the lights on the front, the only one that's working is a single headlight. 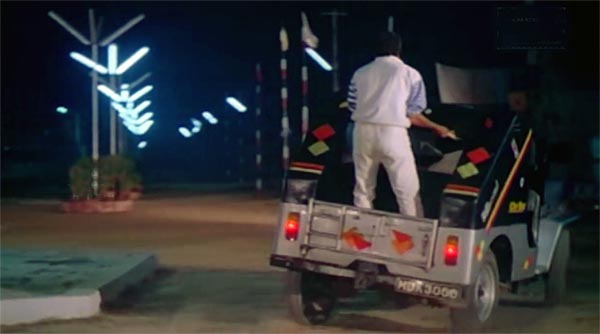 The fastback makes for a handy place to hold on if you're standing up in the back. 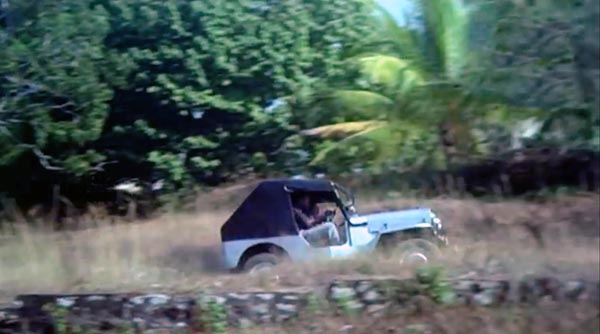 There are a few nice shots of the Jeep driving through the beautiful Indian landscape. 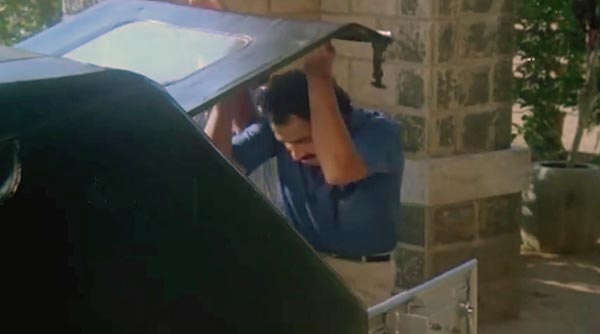 At one point, the friends have to climb into the back for some reason, which gives us a look at the vinyl top's nifty rear hatch. 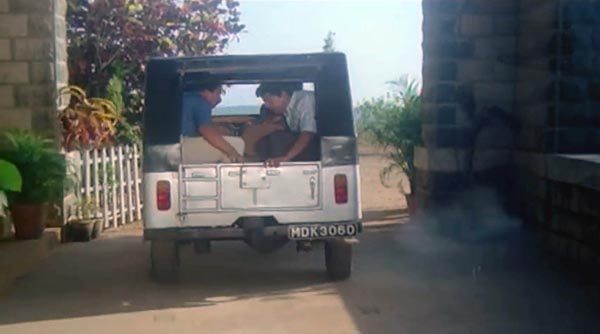 But the fastback really cuts down on the headroom in the back. 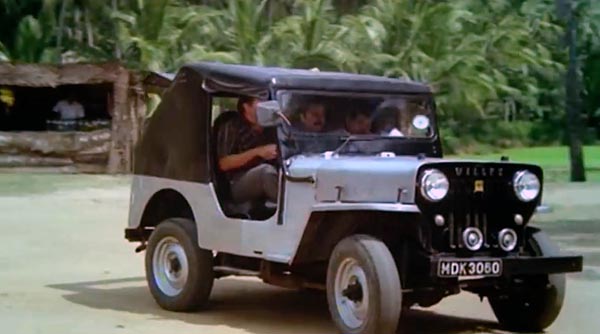 Later in the film, the fog lights have disappeared again. 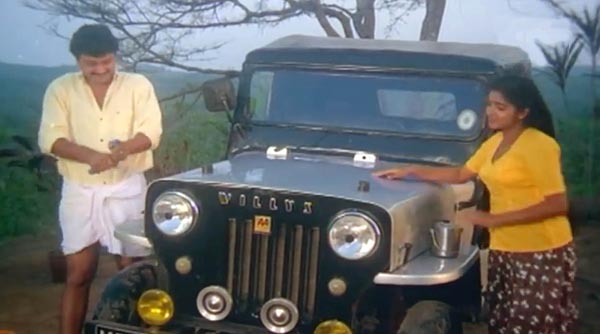 But before long two of the lights are back, and the 3B gets a wash. This is about the only time a female character pays any attention to the Jeep.

The black radiator guard with silver outlining of the WILLYS stamping, is a nice look. Also on the grille is an Automobile Association badge. 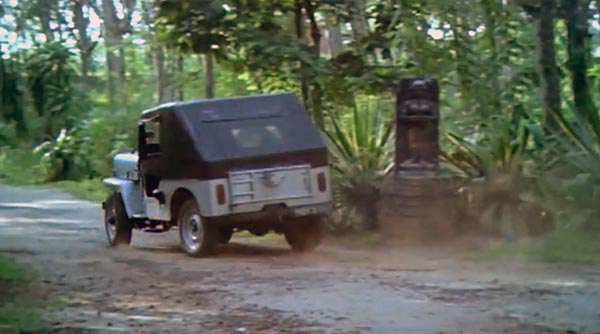 Near the end of the film, everybody heads off to a villa, where there is a final dialogue scene. Jayaram gets tears in his eyes, so it's probably a sad ending.

Thanks to C N Sreejith for telling me about Ezhunnallathu, and thanks to Binnette for the "India Film" logo at the top of the page. -- Derek Redmond