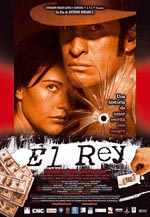 El Rey ("The King") mixes biographical fact with the urban legend that members of the Peace Corps opened the market for Colombia's cocaine three decades ago. The 2004 film is a fictionalized account of Jaime Caicedo, Colombia's largely unknown first cocaine drug lord, a violent but Robin Hood-like figure who rose to power during the 1960s and 70's in Cali, Colombia's third-largest city. 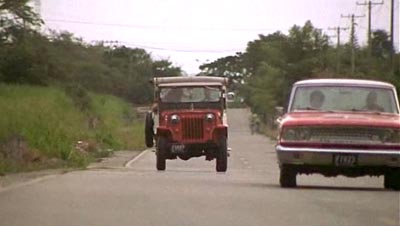 Pedro Rey is the ambitious owner of a nightclub in the city of Cali. He meets a Peace Corps worker named Harry, who joins Rey to move cocaine to New York and other U.S. cities. The film tracks Rey's evolution from opportunistic businessman to megalomaniacal drug lord.

Director Antonio Dorado, a native of Cali, saw the film as Colombia's chance to tell its own version of the drug war's beginnings, long before the country became the large recipient of US military aid that it is today. 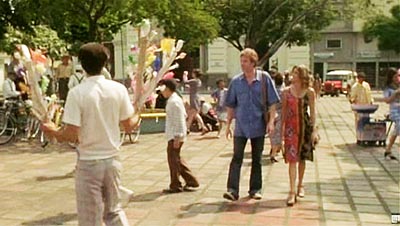 Recruiting a Peace Corps worker as his North American distributor, a small-time crook as his supplier, and a Marxist revolutionary as his chemist, Rey turns the modest Colombian coke trade into an empire. "The King" then sets about protecting his empire by adding a cop and a politician to his team, as well as buying the loyalty of the local peasants. 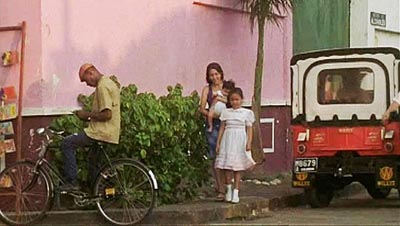 One online reviewer commented, "To me it was like Scarface with more substance. This movie is made in Colombia about a real Colombian drug kingpin and it's excellent. It's available on Netflix, because obviously Blockbuster wouldn't carry a movie like this. It's not a high budget action movie, it's more of a crime drama that has a very authentic feel to it since it's all filmed on located in Cali, Colombia. 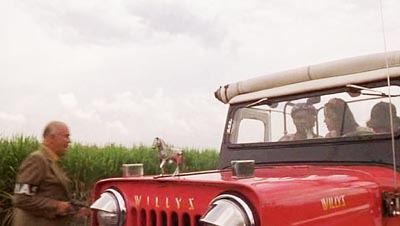 The Willys has some of the popular features seen on Jeeps in Colombia, such as mud flaps, headlight shades and a hood decoration.

A shot showing the Jeep's dashboard (70K JPEG) reveals that this is a post-1961 model with a T-handle parking brake.

A reviewer from Brazil writes, "El Rey (unlike many American films) doesn't pass judgement, and there are no car chases, great shootouts or many other things so dear to the American movies. There's no tear-stained moralism or preaching. El Rey is able to simply tell a story which shows the life of a big cocaine trafficker, his connection to the time, and his hopes, loves, and dreams. This is a film that portrays human beings with their contradictions."

Thanks to Federico J. Cavedo for telling us about this film. -- Derek Redmond