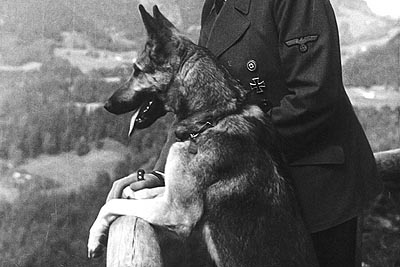 Some background: Blondi was Adolf Hitler's German Shepherd, a gift as a puppy from Martin Bormann in 1941. Nazi propaganda made use of Blondi to portray the Führer as an animal lover, and Hitler was apparently strongly attached to her. Blondi stayed with him even after his move into the Führerbunker under the garden of the Reich Chancellery on 16 January 1945. (Wikipedia)

Blondi, Hitler's Dog (Spain, 2012) is only a short film (16 minutes) but would be worth including here in The CJ-3B in the Movies even if it was just for this opening shot, where a Jeep crashes through a gate.

The action takes place in France in 1944, where two American soldiers manage to kidnap Hitler's dog. 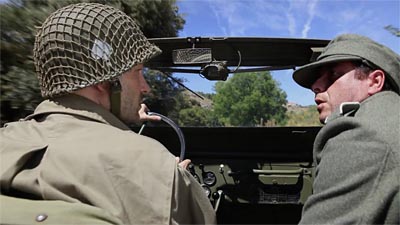 The quarter-ton is really one of the stars of the film, so it might seem strange that an early-1960s Viasa high hood built in Spain is playing the World War II jeep. But MBs and GPWs are not as common in Spain as in other parts of Europe, because there were no Allied troops there during the war. So for a low-budget film being shot in Spain, it could be a challenge to find an authentic G503. 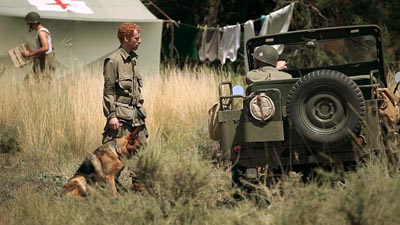 It's also true that even major Hollywood films (like Patton) have used newer Jeeps in WWII settings, so the filmmakers probably weren't worried that the incorrect model would distract many viewers from the bizarre story about the GIs stumbling onto an opportunity to steal Blondi. 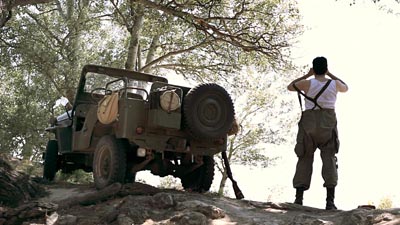 Along with the Willys-Viasa badge on the front of the Jeep, this rear view helps identify the Jeep as an early 60s Hurricane-powered Viasa. Later diesel versions had conical steering wheels, and moved the gas filler to the passenger side. (See Military Jeeps in Spain on CJ3B.info.) 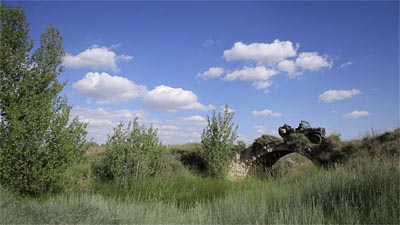 The visuals in Blondi are beautiful, and the art direction mostly does a good job of creating the wartime look. The dialogue is in English but is unfortunately not convincing for an English-speaking audience because the actors are clearly not Americans. 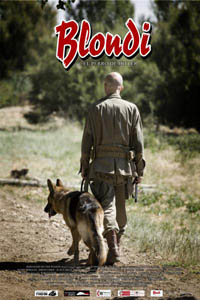 I won't tell you what happens at the end of the film, but it's poignant because the end of the story of the real Blondi is known. On 29 April 1945, with Russian troops closing in on his bunker, Hitler expressed doubts about the cyanide suicide capsules he had received from Heinrich Himmler's SS. To verify the capsules' potency, Hitler ordered one to be given to Blondi, who died as a result. Hitler then shot himself the next day.


Thanks to Federico Cavedo for spotting the film. -- Derek Redmond