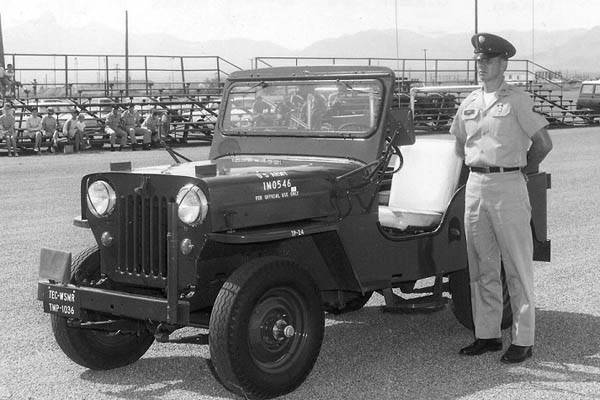 Below the 2-star plate (covered in this photo, to indicate the officer is not in the Jeep) the bumper carried a plate labelled for the motor pool of "TEC" (Test and Evaluation Command) at WSMR.

Larry Doane comes from an Army family, and says, "I consider myself extremely lucky to have even been born. Grandpa served in the trenches in WWI (machine gunner), and my father served in the Pacific (1936-1940, Army) and 1943-1945 in the Navy."

Larry left the Army in 1969 as a Specialist 5 (Sergeant), but saved the photo from his time at WSMR, and comments, "I was assigned to the Commanding General's staff. The photos are of my parade Jeep. The Army used this type in the U.S. and the swing-axle 151 type in Vietnam and other overseas assignments. Most Army units, as I recall, preferred the older type Jeep. The swing-axle was faster and smoother to drive, but it would roll over. This Jeep had white seats because it was set up for parades. The 'roll bar' in the back was also added at White Sands. It was, of course, a handhold for those who rode in the standing position."

Other notable features of the Jeep are the large mirrors, flag holder, and chromed locking hubs on the front. The steel hardtop usually seen on Army CJ-3Bs may have been removed at WSMR. 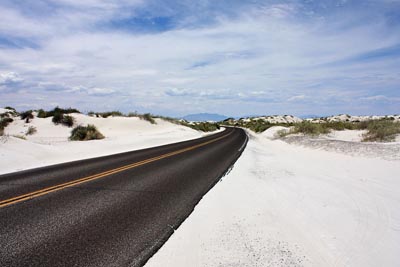 White Sands Missile Range is a weapons testing range of almost 3,200 square miles in southern New Mexico. It is the largest military installation in the United States, and was the site of the first atomic bomb test. (1) It is an area of varied terrain including the Tolarusa Basin and the San Andres Mountains, where there are many stories of buried treasure, often involving gold stolen from Mexico.(2)

Also within WSMR is White Sands National Monument (photo at left (3)), the world's largest gypsum dunefield. Conservationists consider the military reservation a de facto wildlife preserve, and it does play a significant role in the preservation of a number of species.(4) 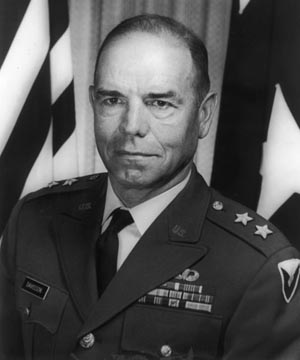 Major General Horace G. Davisson arrrived at WSMR in 1966 with an impressive career in the U.S. Army. During World War II, he was Executive Officer for the Chief of Ordnance in the European Theater and participated in planning the Normandy and Central European Campaigns. During the Cuban Crisis of 1962 he was named to organize and command the Peninsula Base Command in Florida.(5) He wears the insignia of the Army Material Command in this photo taken in 1967.(6)

Davisson clearly inspired respect among the troops he led. Larry still says, "General Davisson was absolutely the most honorable man I have ever met. And I have met a few. They seem to be a very rare breed."

He also says the General had a 'rock hunting' Jeep of the same type. "It looked well used compared to the parade Jeep. He was intrigued with the 'Treasure of Tularosa.' I'm pretty sure he found the outcropping where the gold was buried. He did NOT allow anyone to accompany him on his 'rock hunting' expeditions." 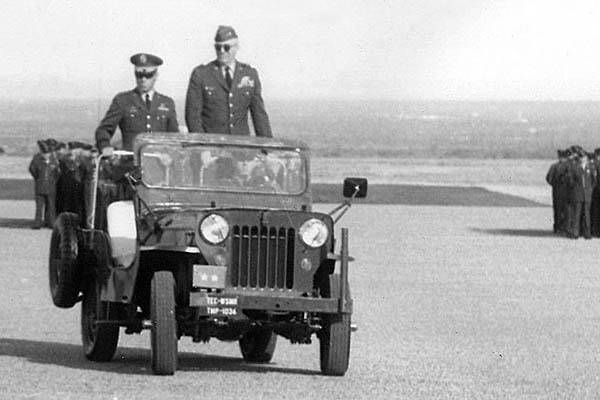 The second photo saved by Larry shows the parade Jeep in use by General Davisson (left) and another general staff officer, inspecting troops. The two-star plate indicates a Major General in the vehicle.

Larry remembers, "While I was stationed at White Sands, we had a great many dignitaries visit, including foreign heads of state. We never had President Johnson, but we did have the VP, Hubert Humphrey."

Thanks to Larry Doane for the photos and his recollections of White Sands, and to Dan Walton, who has restored another Army CJ-3B as U.S. Army 1M0599. -- Derek Redmond

See also a U.S. Army CJ-3B Still in Service as a parade Jeep.