On 18 September 1964 the first episode of Jonny Quest aired on CBS-TV. Four years after Hanna-Barbera first put animation on prime-time TV with The Flintstones, their Jonny Quest was the first successful animated action/adventure series. Its creator and supervising art director was Doug Wildey, and his work was a major early influence on a number of prominent artists working in the film industry today (see Jonny Quest: Adventures in Animation on YouTube.)

The title character was an 11-year old boy who got into dangerous adventures in many interesting corners of the world. Although not as well known as Tintin, Jonny Quest and his dog Bandit could be called the American version of the young Belgian reporter Tintin and his dog Snowy, who tangled with master criminals around the globe in a series of 24 graphic novels which were later also animated. 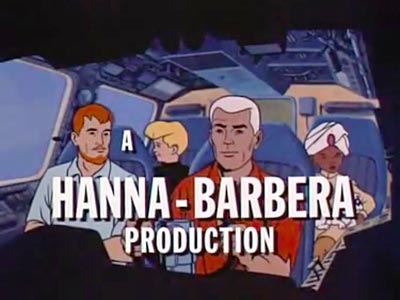 The cast of characters in JQ included globetrotting scientist Dr. Benton C. Quest, his son Jonny, secret agent Race Bannon, Jonny's adopted brother Hadji, and his dog Bandit. The team had a home compound in the Florida Keys and travelled around the world on their own supersonic jet (right). They were assisted in some episodes by a mysterious woman known as Jezebel Jade.

Although CBS did not renew Jonny Quest as a prime time series in 1965, they did start re-airing the 26 episodes on Saturday mornings in 1967. 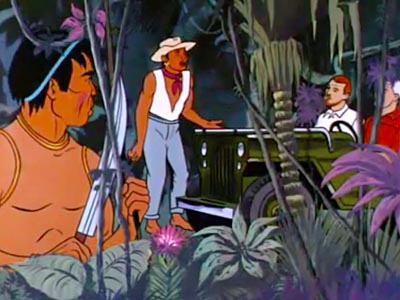 One of the best Jeep scenes in the series is early in "Treasure of the Temple" (Episode 6) where the team is riding through the jungle in what appears to be a surplus WWII Willys MB, judging from the front grille and headlights (although the hood is almost high enough to look like a CJ-3B.) They're ambushed by locals a couple of times before they reach their destination. 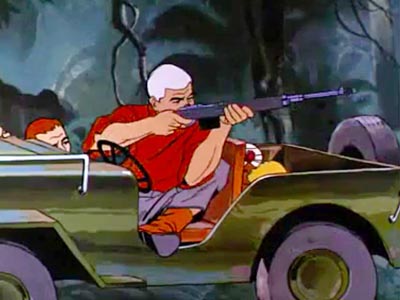 A ruthless British treasure hunter and his native confederates are trying to stop Dr. Quest's archaeological expedition to an ancient Mayan city in the Yucatán jungle. Dr. Quest says, "We've been in worse situations!" and Race Bannon scares them off with a few shots. 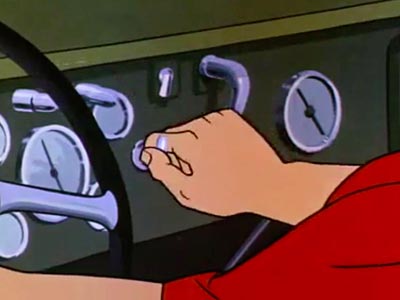 Doug Wildey had obviously seen an early Jeep dashboard, and captured the look of it pretty well (although there seem to be a couple of clocks reading five minutes to five) in this closeup drawing of Race starting the ignition. 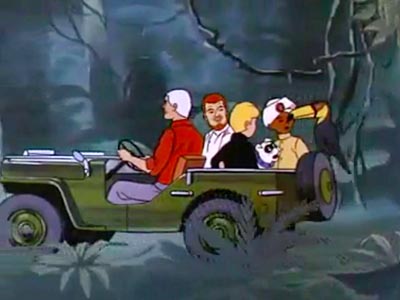 The action in the JQ series is often quite dramatic or even violent, and the art is appropriately dynamic. But there are also some driving shots in a style familiar to viewers of The Flintstones, with the background just scrolling across the screen. 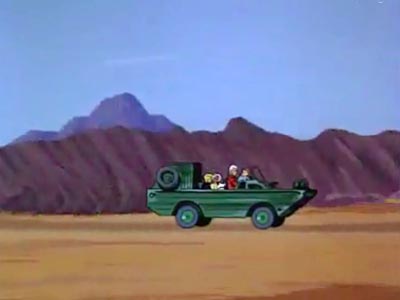 Doug keeps up the reasonably accurate Jeep art, with nothing less than a Ford GPA amphibious Jeep. 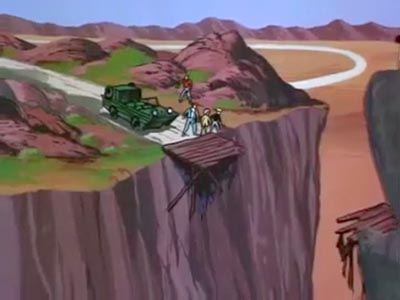 Once again a master criminal doesn't want the team sticking their noses where they aren't wanted, and a flying Jeep might have been more useful than an amphibious one. 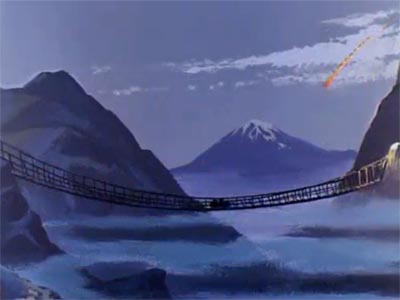 "Monster In The Monastery" (Episode 25), has Jonny and Hadji taking on a gang of political terrorists in Nepal who are dressed as yetis and holed up in an abandoned palace, accessible only via a suspension bridge. 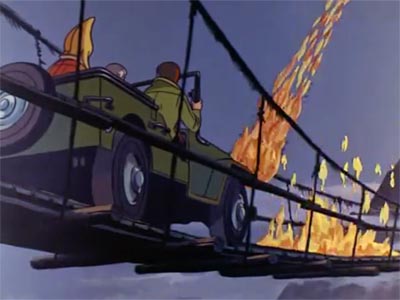 An exciting Jeep sequence, and a good example of the dramatic action in Jonny Quest, is the firebombing of the bridge in this episode. 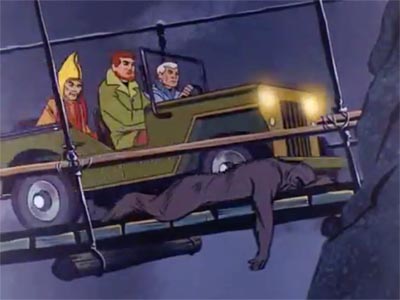 The Jeep makes it through the flames, and a boulder hurled by one of the gang bounces off the hood and knocks him out. 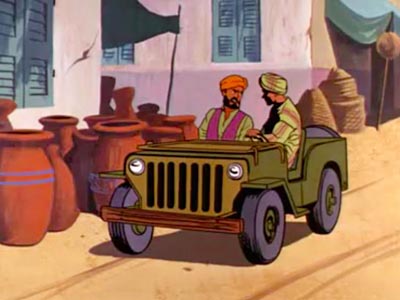 In "The Curse of Anubis" (Episode 3) the bad guys are seen in a Jeep.

Similar olive drab flatfenders appear briefly in a number of other episodes. Longtime JQ fan Jerry K told me, "There's one in 'The Robot Spy', 'The Fraudulent Volcano', 'Shadow of the Condor', 'Double Danger', 'Werewolf of the Timberland', and 'The Invisible Monster'. All of them look like the old Willys Army type." 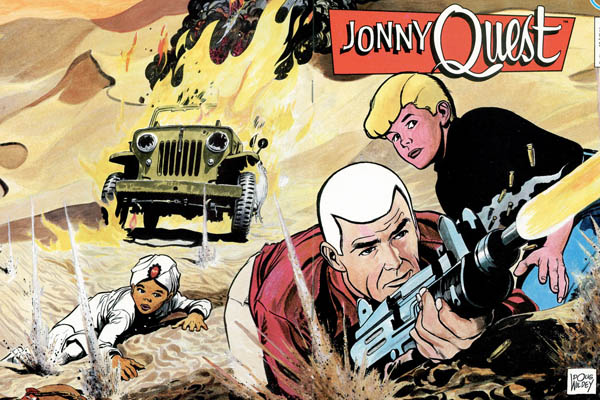 During the show's original run on TV, only one comic book adaptation appeared, published by Gold Key in December 1964 (and now a real collector's item.) But two decades later, from June 1986 to December 1988, Comico Comics published a series of 31 new Jonny Quest stories that were quite faithful to the style of the original TV series.

Doug Wildey himself did some of the art, including this wrap-around cover for the first issue, featuring a CJ-3B in flames as Race Bannon blasts away and the boys duck for cover. 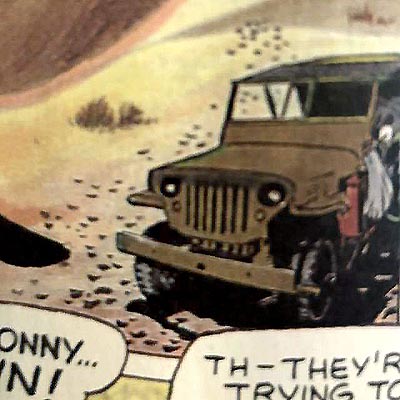 JQ fan Curt in Houston told me, "The title of the issue is 'The Sands of Khasa Tahid.' Race, Jonny and Hadji are driving through the desert in the Jeep, searching for a lost city. The story appears to be set in Northern Africa. Of course, to complicate the story, there are gun-runners using the (buried) lost city to hide their wares.

"Our trio is saved by Jezebel Jade when the gun runners blow up the Jeep, and they eventually run across a Napoleonic solder who claims to have been there since 1814, and that he had run up against Roman solders who had been there since the Punic Wars. A must-read!" 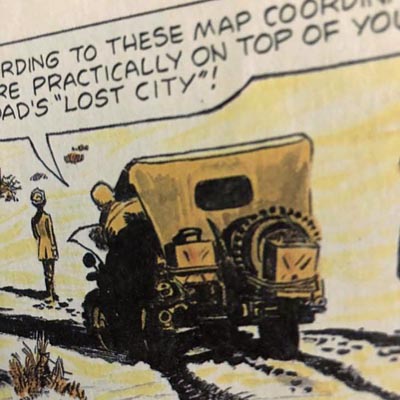 Thanks to Curt for scanning the panels from the book seen here. He also said, "There are very few images of the Jeep, and it's mostly shown in silhouette."

And unfortunately the Jeep as portrayed inside the book is not the CJ-3B shown on the cover -- it's a Willys MB. But it's drawn with quite accurate detail by Wildey, despite the small size of the panels. 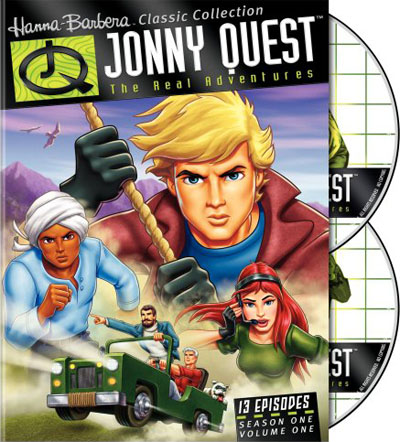 After two decades in re-runs (on all three major US television networks at various times) some additional episodes were produced in 1986 as New Adventures of Jonny Quest, for syndication as part of The Funtastic World of Hanna-Barbera.

Turner Broadcasting acquired the Hanna-Barbera library in 1991 for its Cartoon Network, and in August 1996 introduced Jonny Quest: The Real Adventures, which continued for two seasons. The DVD cover art shows Benton, Race and Bandit in a Land Rover, which did appear in some episodes, but there are also some good Jeep appearances in this new series. 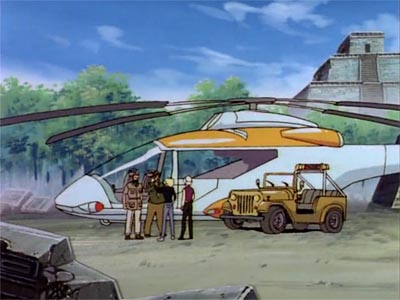 Probably the best Jeep episode is "The Mummies of Malenque" (Real Adventures Season 2, Episode 1). The team gets hold of a police Jeep in Colombia after they're threatened by a corrupt officer (100K JPEG). 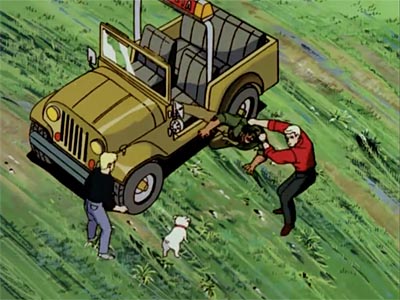 The shape of the door openings would make it a CJ-7. 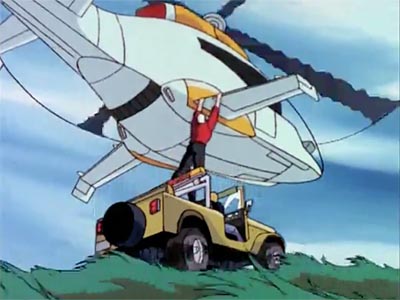 Race manages to leap onto the villain's helicopter from the Jeep driven by Jonny, who is now an older teenager in The Real Adventures series. 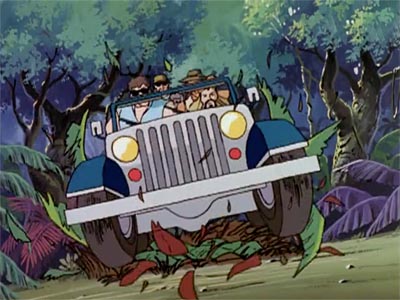 The thugs in the same episode also have a CJ-7 -- possibly the only Jonny Quest Jeep in a color other than green. 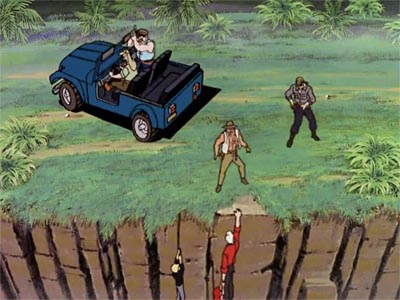 Overall, The Real Adventures are not up to the standards of the original Doug Wildey series from thirty years earlier, but even so, the art is often quite dramatic -- and in this episode the Jeeps are nicely done. 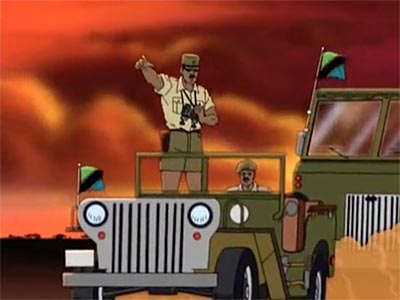 Although clearly drawn by somebody with less concern for accuracy, this Jeep has to be considered an M606 (military CJ-3B.) It shows up in Tanzania in "Ndovu's Last Journey" (Season 1, Episode 5). 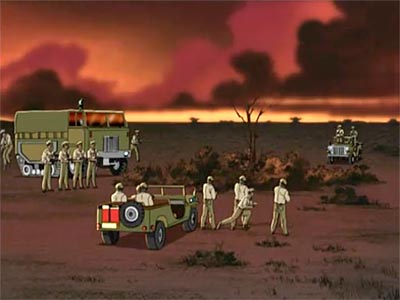 The two Jeeps belong to a Tanzanian military patrol searching for elephant poachers. In this episode the Quest team drives a Land Rover, and a pair of nasty poachers have a Humvee. There's lots of good driving action. 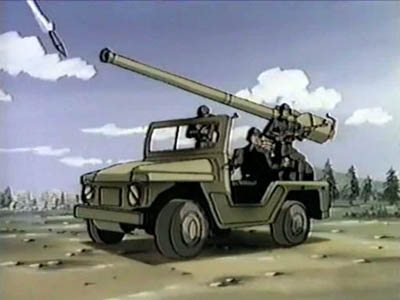 A few generic OD Jeeps are glimpsed in other episodes of The Real Adventures. But an unusually distinctive one is this M422 "Mighty Mite" with recoilless rifle, which appears in "Rock of Rages" (Season 2, Episode 2). 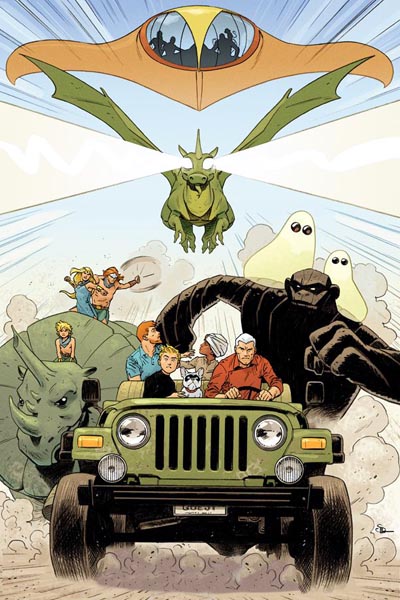 In 2016-17, DC comics produced Future Quest, a 12-issue series featuring Jonny Quest and a variety of Hanna-Barbera superhero characters, in "an epic struggle with a dangerous villain who threatens the galaxy." This promotional poster by artist Steve Lieber includes a realistic rendering of a TJ Wrangler.

There have been continuing rumors of a live-action Jonny Quest movie in development, but nothing confirmed yet. It will be interesting to see if Jeeps are involved.

Return to CJ-3B Advertising and Literature, and see also The CJ-3B in the Movies.