Walter M. Baumhofer (1904-1987) was one of the most prolific artists painting cover illustrations for the "pulp" magazines of the 1930s and 40s, and in fact became known as "King of the Pulps." He had pursued a career in art after losing three fingers as a teenager, playing with souvenir ammunition from the First World War. Starting at the age of 22, he did hundreds of covers for action magazines such as Doc Savage, The Spider, and Wild West Weekly. See for example this Dime Detective cover from February 1935.

But a funny thing happened; television came along and people stopped buying pulp magazines. However, Baumhofer's focus had always been on the people in the scene, not just the action, and his talent for painting expressive people allowed him to work increasingly for "legitimate" magazines such as Esquire, Liberty and Cosmopolitan. See for example this 1950 cover for The American magazine, called "Wife in Charge."

Another market that was still going strong was paintings for calendars. Outdoorsy scenes were popular, and one of the favorite themes was "bears invading the campsite." 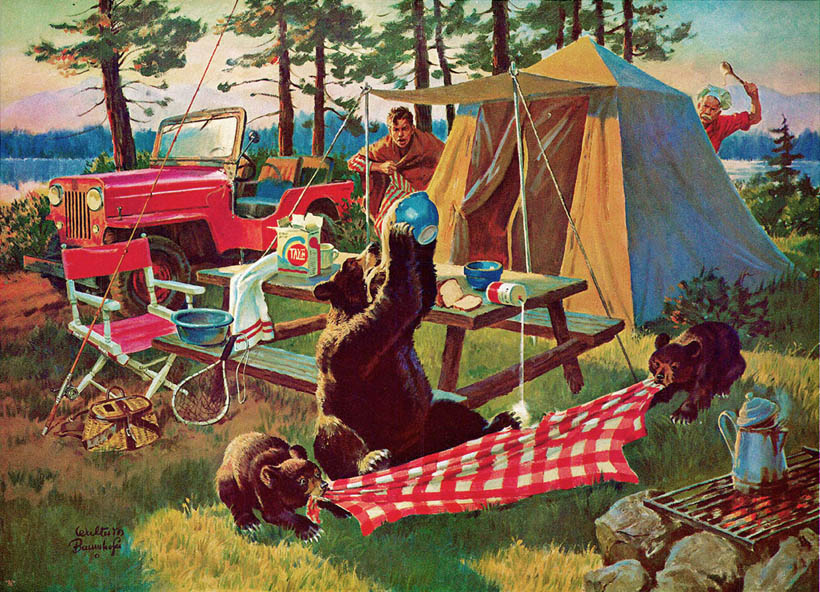 Dave at eWillys.com found this print and sent over a scan of it. Titled "Tug of War," it shows an early morning visit by a bear and her two cubs, just as Grandpa was making coffee in the old coffee pot and getting ready to put some pancakes on the griddle.

And in the background, a CJ-3B! The President Red paint would date this picture to 1955 or later. 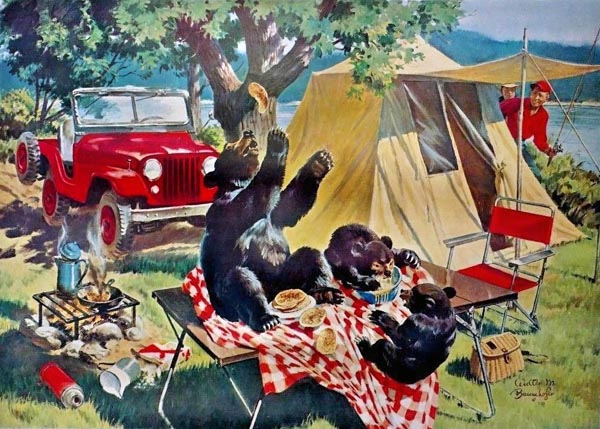 Walter updated the Jeep to a CJ-5 when he revisited the idea with "Breakfast Guests," in which the bear family waited until most of the pancakes were on the plate, adding to the fun.

The blue coffee pot and the red checked tablecloth were starting to become Baumhofer trademarks, as he put his own stamp on a genre which had already been established by artists such as Emmett Watson. 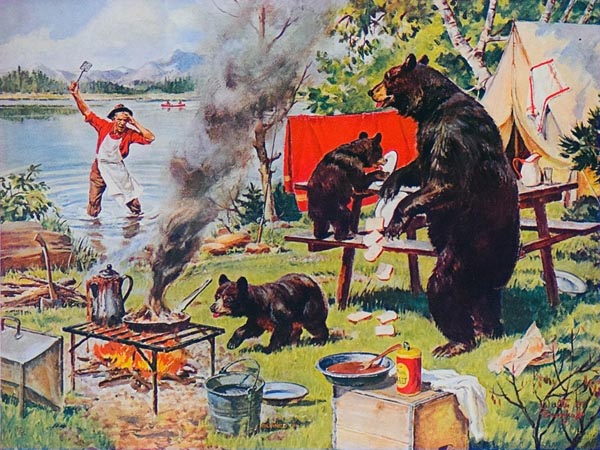 Watson had put a Jeep in at least one of his bear paintings, and Baumhofer began including them frequently. But not always; sometimes a blanket or a canoe would serve to provide the big splash of red in the image, as in the case of "Burned Up." 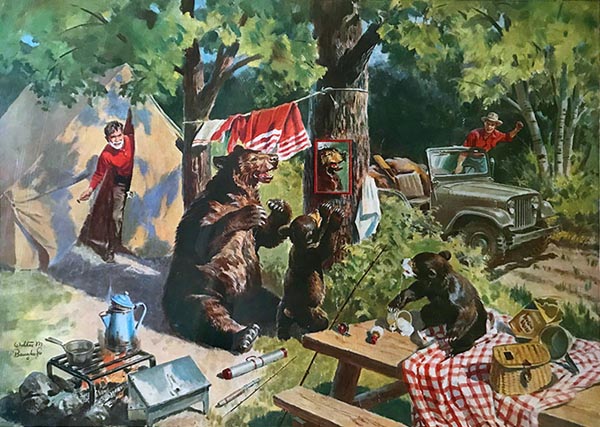 There's a red blanket and a Jeep in "Self Appreciation."

Walter's ability to tell stories in his pictures, which had served him so well in creating magazine covers which jumped off the newsstand, really comes through in this one. Also his talent for showing human emotion, which exends to the bears too, as they enjoy the mirror and shaving mug. 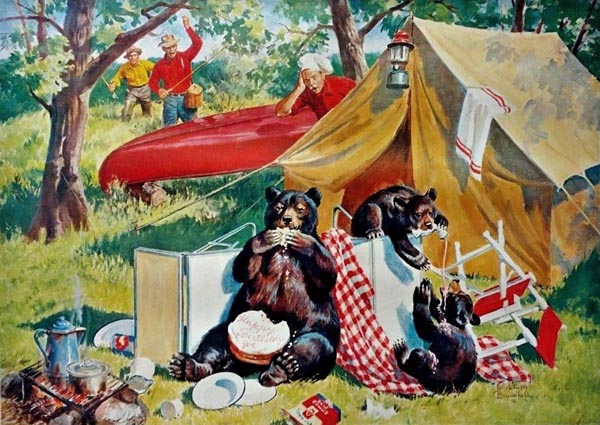 Cooking is usually a big part of the story, and in "Birthday Party," Grandpa the camp chef has outdone himself by producing a fully frosted cake. Naturally mama and the cubs got their invitation on the breeze, and have shown up to enjoy the cake and the icing. 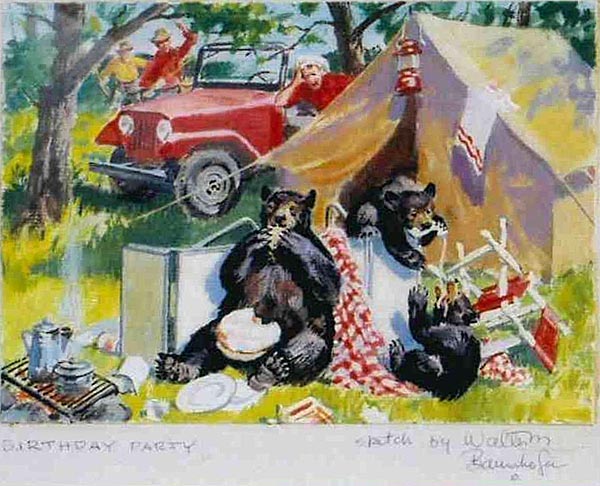 But, surprise -- there is an early sketch for "Birthday Party" which has a red Jeep in place of the canoe. Might make more sense, because why would the canoe be behind the tent instead of down by the water?

If Walter had kept the Jeep in the final version, he would probably have rendered it more accurately! 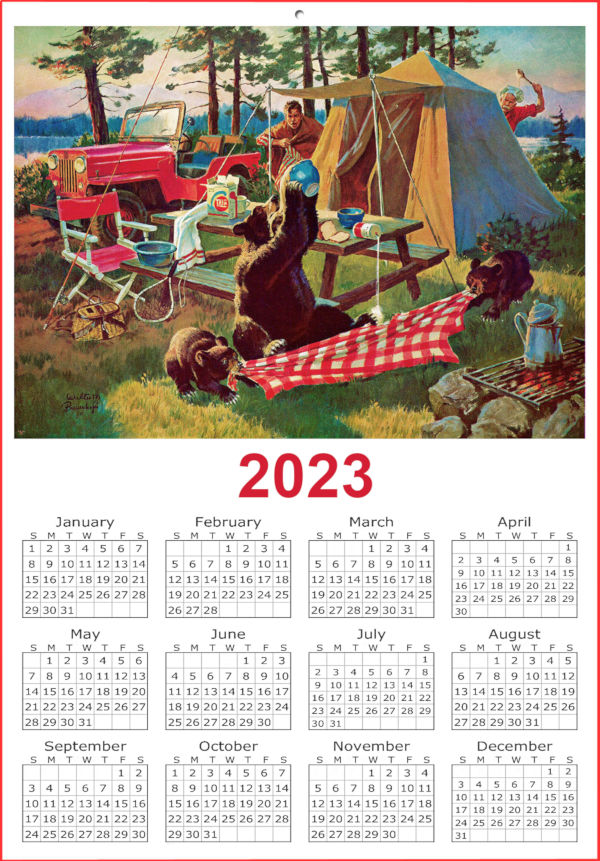 Bonus! These little paintings by Walter Baumhofer come up for auction occasionally as originals or prints, but back in the day they were published on calendars. So I thought, why not show "Tug of War" here as it was originally intended to be seen? Click the image for a full-size printable copy, updated for 2023.


If you want a bigger calendar, take a look at Holy Toledo! -- Derek Redmond