This collection of observations made in the 1990's by John Hubbard as he collected and worked on his several CJ-3Bs was previously part of his Hubbard's Halfcabs website. I have also included some of John's photos of his 1954 CJ-3B, one of the nicest and best-known examples of a CJ-3B restoration. It was featured in an article by Jim Allen in Jp magazine, April 2000.

Hubbard's Halfcabs created this FAQ for the purpose of information exchange and cannot be held responsible for errant data. This FAQ may not be reposted on commercial sites. If you ever looked around Hubbard's Halfcabs, you know the site showcased several CJ-3B restorations. This FAQ deals with the differences between a 1953 CJ-3B, a 1954 CJ-3B and a 1961 CJ-3B. It can be thought of as a notepad of experiences and knowledge rather than a definitive document. Last updated 2.17.98 -- jmh. 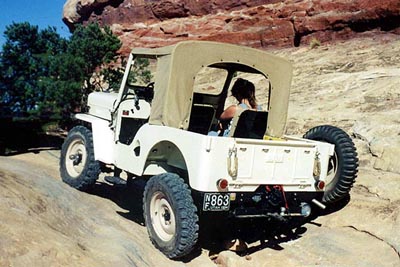 B. Frames--1953 CJ3B frame is a thinner gauge then 1954 and 1954 is a thinner gauge than 1961. The 1953 frame is boxed at the rear and has a strengthening crack rail (strengthening plate) on the top part of the frame running from front to rear approximately between the front and rear spring hangers. The 1953 frame has gussets on the front horns to attach the front bumper. The 1954 frame is thicker than the 1953 frame and is not boxed at the rear. There is no crack rail on top of the frame. The front horns attach to the front bumper in a similar fashion to CJ-5s-- rivets from the top and bottom through the bumper into the frame itself -- no gussets.

The 1961 frame is very thick and though thicker than the 1954 frame is visually identical. All three frames had the same mechanism for attaching the pedals to the frame but the 1961 vehicle had a bolt on bracket where the 1953 and 1954 vehicles were welded to the frame. The 1953 frame had a very large block of metal welded to the underside of the front cross pipe where the steering mechanism attached to the frame (I found at later, 2/17/98, that the OEM piece probably was destroyed and this big "block" was welded in its place as a repair. So as far as I know the attachment for the bellcrank steering assembly is identical on the 1953 and 1954 frames.). The 1961 frame was similar in this area (steering attachment) to the 1954 frame. All three vehicles had a larger hole in the rear crossmember (bumper) for the rear PTO and a larger hole in the front bumper for a handcrank. 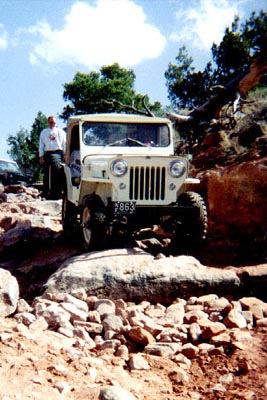 D. Axles/Transmission/Transfer Case--All three of the HH CJ3B's (1953, 54, 61) each had a Dana 25 in the front and a Dana 44 in the rear without posi. They also had 5.38 differential gearing. They all had T90 transmissions. The model 18 transfer cases each had 29 tooth output sprockets (the gear you would remove to install an overdrive) with a 6 spline shaft interface.

E. Body/Interior--The 1953 body had been modified as a deer hunting Jeep, so there may be other items indicating a difference from later models. The only thing I can remember that stands out as a difference from the 1954 body is that the underseat gas tank was attached with a strap across the front of the tank similar to a CJ3A tank (?), whereas the 1954 and 1961 bodies both contained underseat tanks that had a strap across the tank from front to back.

The 1961 body has the parking brake coming through the front of the dash about 3-4 inches up from the bottom of the dash. The 1953/54 bodies have the parking brake attached to the support "under" the dash--they also have a curved potmetal parking brake handle whereas the 1961 parking brake handle was a t-shaped plastic. The 1961 vehicle had molded-rubber topped brake and clutch pedals whereas the 1953/54 vehicles had metal toped pedals only--the 1953 vehicle did have non-integral rubber topped pads that were attached to the top of the metal pedals with a bent-tab system (third party I would think). The transmission cover plate on the 1953/54 vehicles has a threaded insert on the underside for the heel rest used with floor-mounted starter switch. The 1961 transmission cover plate does not have this threaded insert.

F. Heaters--Both the 1953/54 vehicles used the old CJ3A style heater with a stock hole in the underside lip of the dash about 4" to the right of the parking brake support for the WO heater switch which is made of Bakelight (I make this deduction based on the 1956 CJ3B parts guide--neither my 53 or 54 had OEM heaters when I bought them.)

The 1961 heater can be identified externally by the large (4-5") hole cut in the passenger side of the body. This hole was covered with a metal ring and wire mesh to keep out small animals. The 1961 heater is notched (shaped like an inverted letter V) to give maximum legroom to the passenger and has a lever to select fresh air intake. The heater in my vehicle also has a lever that allows heat to exit a fitting on the top of the heater and travel through a wire and canvas tube up to a dash hole (approx. 2" in diameter) directly above the steering wheel, through a rubber grommet and up to a 90' rubber elbow feeding a small metal oval that acts as a defroster. I am not 100% sure which parts are stock Jeep and which parts are from aftermarket suppliers, though I have seen 3 heaters of this type as well as stock Jeep literature that shows the heater and the hole in the side of the vehicle. The defroster part is the item with origin discrepencies. 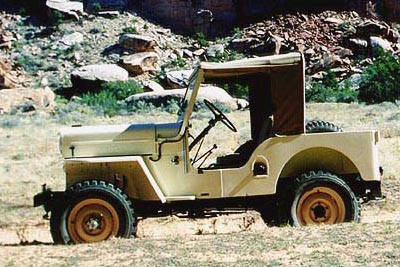 G. Dash/Gauges--The dash is the main area in which these vehicles differ. The 1953/54 dashes use the small CJ3A-style gauges whil e the 1961 body is set up for the larger CJ-5-style speedometer cluster (or non-cluster). The 1953/54 dashes have one tell-tail light for brights that the 1961 dash did not have. The 1961 dash does not have an illuminator light--the speedo cluster is internally illuminated. There are differences in parking brake handle location as noted above.

H. Seats--The 1953 and 1954 CJ3B's have CJ3A front seats and CJ3A rear seats while the 1961 CJ3B had front and rear seats similar to the CJ-5 seats of the time--The driver's seat attaches to the top rail of the body at the driver's door opening rather than attaching to the floorpan of the driver's compartment.

I. Lights/Signals--The 1954 CJ3B came stock with only a driver's side rear tail light and no signals. I would assume the 1953 was the same way. All 3 of my CJ3B's came to me with Signal Stat indicators on the steering column and the 1954 vehicle's Signal Stat looked like it was added soon after the vehicle was purchased. I am not sure what the stock taillights looked like on the 1961 vehicle, but from the holes in the body it appeared they were in the same location as earlier vehicles--approx 1" from the bottom of the body on each side of the tailgate. The light housings for the 53/54 rear lights are pot metal and molded into a circle. They were gloss black on the outside and white on the inside. The have a chrome ringed red plastic lens. The ring and the lens are one piece being held together with 2 hollow rivets. The hollow rivets act as attachment holes for the 2 screws that hold the lens/bezel to the taillight housing at about 2:30 and 9:30 positions. I have seen different designation (model numbers, etc.) stampings on different lenses that look otherwise identical.

J. Items that are exactly the same on 1953/1954 and 1961 vehicles: Fenders, Grille, Hood, Windshield (including frame and all hardware), Tailgate, and Steering Wheels including external horn buttons (I am not sure about the internal horn mechanisms).

Thanks to John Hubbard for allowing me to post his research. -- Derek Redmond