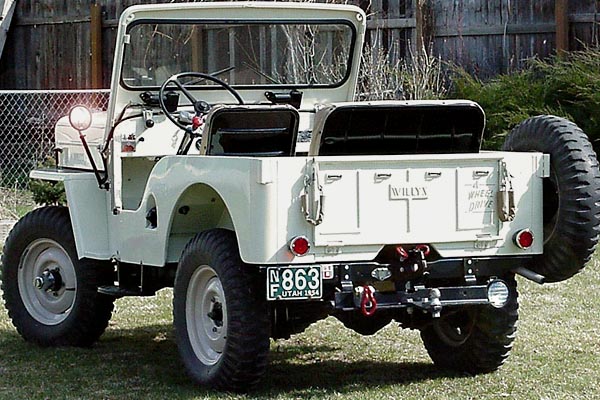 I bought this 1954 CJ-3B (454GB2 30011) based on 4 Polaroids (60K JPEG) and a 2-hour conversation with the then-current owner. He had bought it at an auction from the original owner which was the Redwood City School District in northern California. He had put some wider tires and rims on it so he could get around in the mountains and had cut off a big pushbar that was on the front of the vehicle. 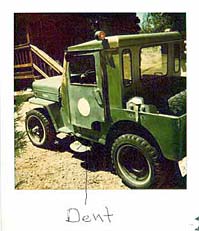 The Jeep had not been offroad (before he had it), had never spent much time outdoors, and had been well maintained for over 30 years by the same gentleman at the school district. It had been used to push school buses around a maintenance shop, and had 24,000 miles on it. I finally received the vehicle about 6 months after I had purchased it, with the original 15" Kelsey Hayes steel wheels (painted the body color) and three of the original Goodyear All Service tires still intact. It had been converted to 12-volt years ago, and had a 12-volt generator and regulator.

The 3B also had a Koenig Deluxe halfcab (model 355), original engine and drivetrain, and Cutlass hubs replacing the front drive flanges. I put some 16" wheels with NDT tires on it and drove it up to Idaho and started tearing it down. After that 130 mile drive (at 50 m.p.h.) I wouldn't drive it again for about a year and a half.

The main challenge to me was finding the parts I needed to make the vehicle look "showroom" new and complete. This had been a working vehicle for all of its life and had missing parts, damaged parts and in some cases parts that were available in 1954, but not installed on this Jeep (heater, pintle hook, etc.). We started to make a list of what replacement parts we were going to need. I bought a 1956 CJ-3B Parts Manual from Walter Miller in Syracuse NY, and that gave me the information I needed to start making some phone calls. NOS (new old stock) parts are still around, but how many calls are you willing to make to find each one -- 30 calls, 50 calls, 100 calls...?

Continue to Hubbard's Halfcabs 1954 CJ-3B, Part 2: Phases of the Project, describing drivetrain and suspension work, and the finishing touches.