The District of West Vancouver, British Columbia purchased a 1947 Willys CJ-2A fire engine in January 1949, as a backup pumper and brushfire vehicle. It was given the shop number 34, and stayed in service with the West Vancouver Fire Department for over forty years, responding mostly in the Horseshoe Bay Area. 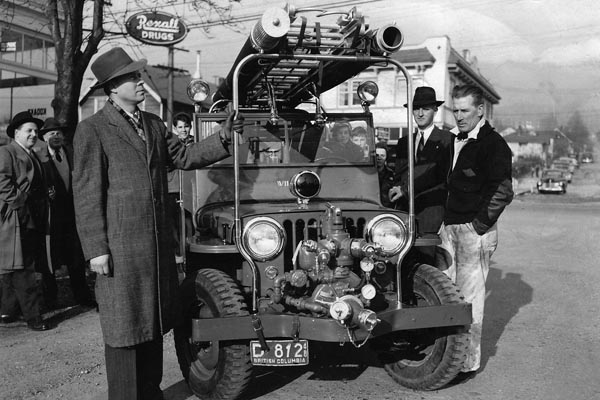 The Reeve had obviously been shaking some hands, pleased with the new apparatus (which had not yet even been paid for.)


Leading up to the purchase, there was an interesting series of correspondence regarding approval of the Jeep as suitable municipal fire apparatus, by the insurance industry: 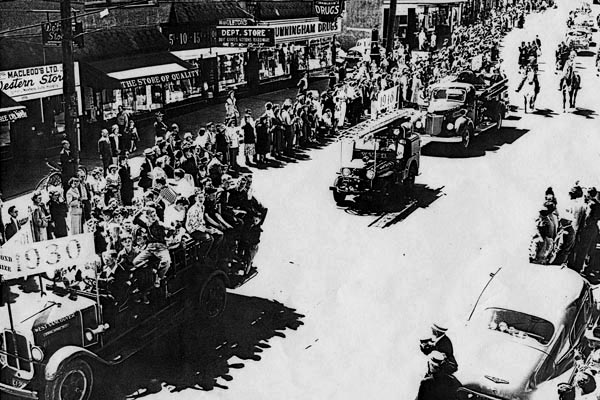 It's not clear if this last letter affected West Vancouver's purchase plans. Within a few days the municipality did go ahead and request a quote on the Jeep, and paid for it in January 1949.

However, later that year they also purchased a 1949 International-LaFrance full size pumper, seen here in a May Day 1950 parade, behind the Jeep and the WVFD's 1930 pumper. Each truck carries a banner showing its year of purchase. 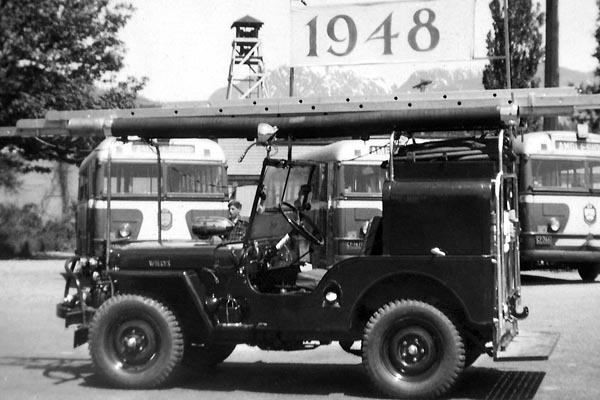 This photo was apparently taken the same day as the parade in 1950, with Unit 34 carrying its "1948" banner. The firehall siren is on the tower in the background.

The WVFD had already added a heavy brush bar to protect the front-mounted pump, and one of the windshield-mounted spotlights had been removed, or possibly broken off when the suction hose was being unloaded in a hurry. Most U.S.-built Jeep Fire Engines had their lights mounted high on the rear where they were safer, but Sterling put them up front for easier access. 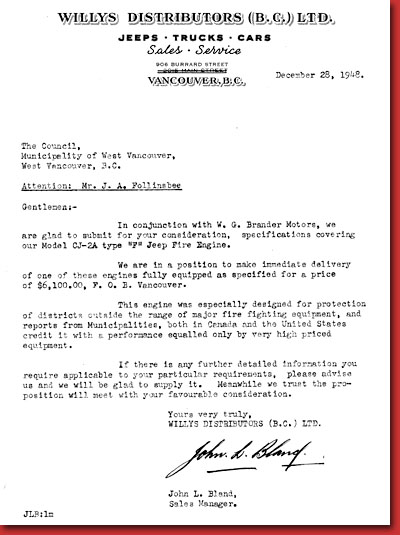 Willys Distributors (BC) Ltd. had submitted a 28 Dec 1948 quote (left) of $6100, jointly with Brander Motors. Both letters of quotation made a point of saying the Jeep was in stock and ready to go.

Willys serial number tag 114850 (200K JPEG) places the CJ-2A near the middle of the 1947 model year, so it may have left the Willys plant in Toledo around the end of 1946. Sterling Machine was busy in 1947 -- this Jeep was their 77th of the year -- so it likely spent months at the plant in Owen Sound. Then it appears it may also have been in stock in New Westminster for quite a while, although the price does not seem discounted. (1) 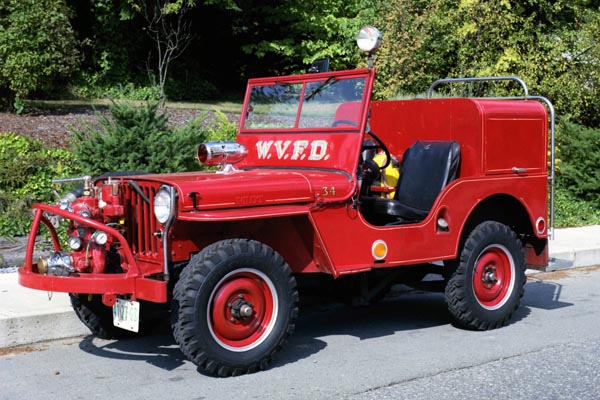 Scott MacKenzie took this photo in 1977 when the Jeep was still in service. He says, "It was being used solely for brush fires, beach access to camp fires, and low-clearance parkade access."

The overhead ladder rack had been removed for stability in the early 1960s, after some near-rollovers. The booster hose tray and water tank were also removed, and replaced with a trailer (240K JPEG) which WVFD purchased from an Imperial Oil refinery in 1961. The trailer came with two pumps and a small tank, but its origins are unknown.

The removal of the ladder rack also had the effect of improving overhead clearance, and in fact the last call for Unit 34 in 1989 was a car fire on the upper parking lot at Park Royal Shopping Center. 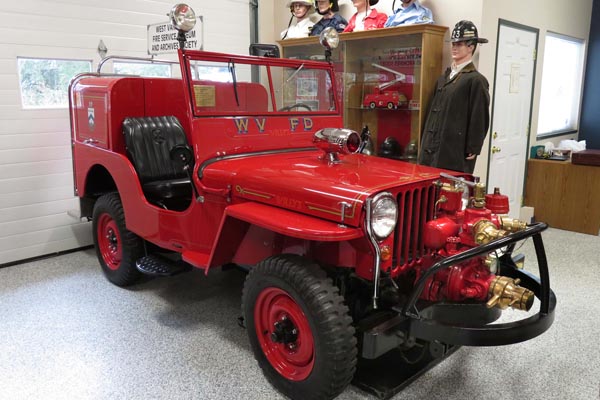 Unit 34 was taken out of service in 1989 and donated to the West Vancouver Fire Service Museum & Archives Society, who began a restoration in 1990 with the help of a donation from Margaret "Billy" Langley, wife of West Van's former Mayor, Art Langley. Volunteer time involved was estimated at over 6,000 hours.

The work included restoring the two windshield-mounted spotlights, custom reupholstery of the seats, and returning to the original-style non-directional tires. The Museum is also planning to install a reproduction of the overhead rack. 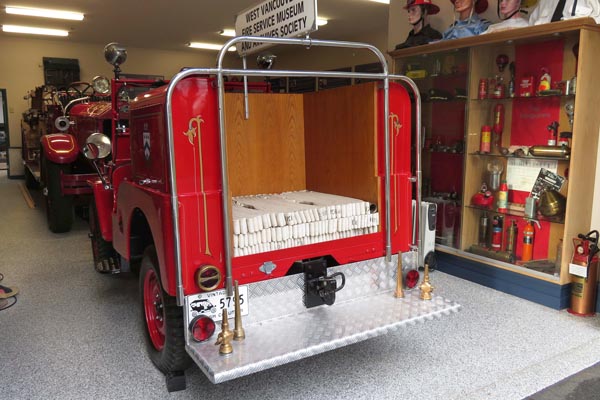 The Jeep is now stored in the Museum building behind No. 4 Fire Station. It is in excellent working order and makes public appearances during the summer months in and around the Lower Mainland.

The Museum has also restored the trailer (240K JPEG) which was used with the Willys.


Thanks to Scott MacKenzie at the West Vancouver Fire Service Museum, and to Joan Hyslop at the Grey Roots Museum & Archives in Owen Sound. -- Derek Redmond