Sterling Machine & Mfg. Co Ltd. was started by George Hindman in Owen Sound, Ontario, after the Second World War. The company fabricated metal items such as snowplows and trailers, and in 1947 moved into building fire engines, including Willys Jeeps. They were in the fire truck business until 1952, using Barton pumps from American Marsh in the U.S.

Sterling's most successful product appears to have been the Type "F" CJ-2A Jeep Fire Engine. At least 77 Willys 1947 CJ-2As were turned into fire engines by Sterling during 1947-48. Like the "factory" Jeep Fire Engine manufacturers in the U.S., Sterling sold its fire engines through Willys dealers in Canada. 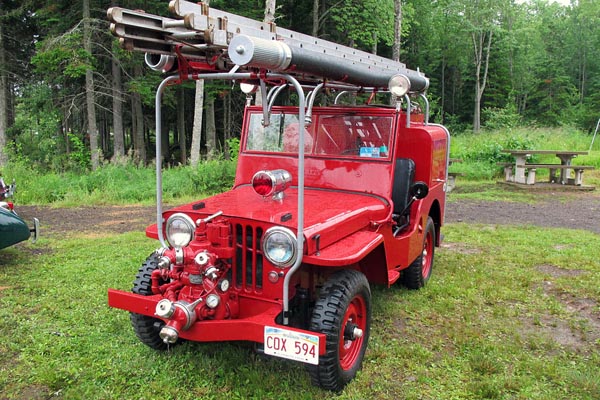 This example was sold to Fundy National Park in New Brunswick by Willys dealer Capital Garage Ltd. of Fredericton. The park was established in 1948, and the houses of people whose property was expropriated for the park were burned, so the Jeep may have been on site when that was done.

This photo was taken at the 2011 Atlantic Nationals car show in Moncton NB by Bill Jarvis.


According to Sirens Across the Sound: An Illustrated History of the Owen Sound Fire Department by John Christie (2008), "Sterling Machine acquired the old Malleable Iron Works plant near the CPR rail line in Owen Sound, around the end of the Second World War. In late 1946, an expansion was begun to the plant complex, to accommodate the building of fire equipment. This line grew from a simple selection of hose reels and racks, to include small trailer-pumps, and finally, during 1947, to full-size fire engines."

"All trucks appear to have been constructed on commercial, engine-ahead conventional cabs and chassis produced by International, Ford and General Motors. Reportedly the first Sterling engine, a 1947/48 International, became Owen Sound FD No.2 (100K JPEG).

"Sizable numbers of small-size pumpers were delivered on Jeep chassis, mostly to the Canadian Armed Forces, but some also to civil fire departments." 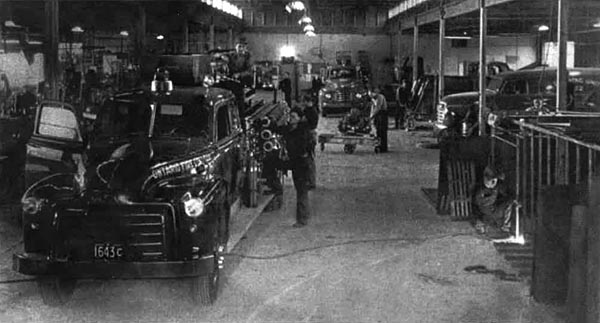 Apparatus in production in this October 1950 photo of the Sterling shop floor in Owen Sound include a GMC four-door pumper and GMC panel van ordered for the Ontario Fire Marshall's training program.


Jan Morrison gave CJ3B.info some further background on Sterling Machine: "They produced fire trucks for Canadian customers using designs licensed from American Fire Apparatus Company of Battle Creek, Michigan. The trucks were marked Sterling Machine & Mfg., but were identical to those produced by AFA in Michigan for the US market. AFA's parent company was American Marsh Pumps, also of Battle Creek MI."

One factor in Sterling Machine's decision to get out of building fire trucks may have been the fact that American Marsh opened their American Marsh Pumps (Canada) Ltd. manufacturing facility in Stratford, Ontario in 1951. Apparently fire apparatus production was phased out at Sterling, and in 1952, the plant was sold to the Hobart Manufacturing company. 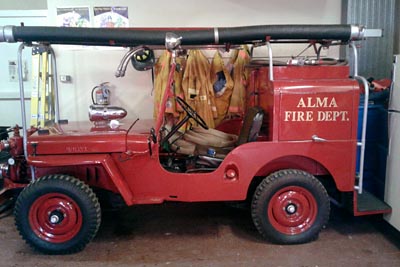 In 1952 the Fundy National Park Jeep was re-sold by Capital Garage (120K JPEG), to the fire department in Alma NB, where it still resides as of 2018 (right). Photos courtesy Alma Fire Chief David Ross. 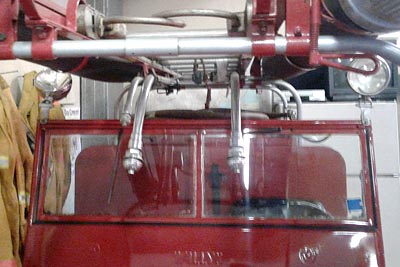 The Alma Jeep is complete with an accessory set not found on most U.S.-built Jeep Fire Engines. The Sterling Type F is designed to be used as a fog engine, and stowed above the cab are two 4 ft.x 1-1/2 in., and one 4 ft. x 3/4 in. curved fog nozzle applicators (see Type "F" Specs below.) These are for use with the supplied combination fog/straight through nozzles (150K JPEG), now known as Coast Guard nozzles.

The Sterling dashboard tag identifies the Alma Jeep as Model F1, with serial number F4647. The last two digits of that number indicate the model year 1947, and the first two digits indicate the 46th unit produced that year.

Sterling trailers (120K JPEG), had a similar builder's plate (80K JPEG), although they are numbered differently. 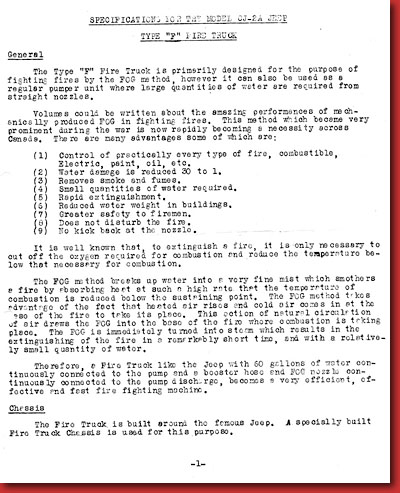 1946 pump test results (240K JPEG) from the U.S. National Board of Fire Underwriters demonstrate that a Jeep with a single-stage Barton pump delivered pressure and volume comparable to larger trucks with 6 and 8-cylinder engines and 2-stage pumps. 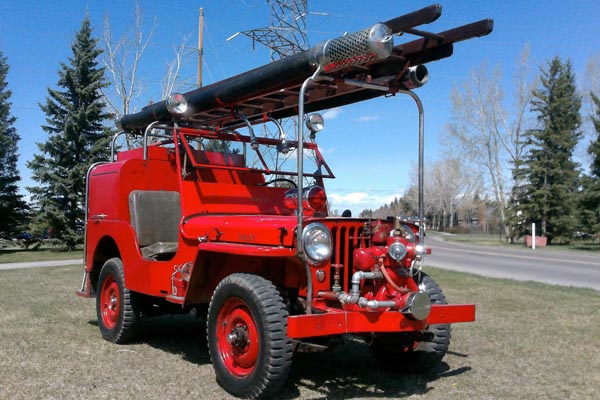 This Sterling Jeep which was in service at Wilcox, Saskatchewan, has also survived in fairly complete condition. The Sterling is very similar to the "factory" fire engines built by Howe and Boyer in the U.S., although the front bumper configuration is a bit different. 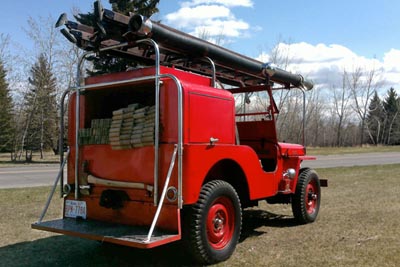 The back end is also a bit different, with the hose bed above the water tank, rather than extending down to the floor.

This Jeep was retired from service and owned by the original department until 2015, and is still complete with most of the fittings and equipment in the storage compartments on the right side and left side (160K JPEGs). 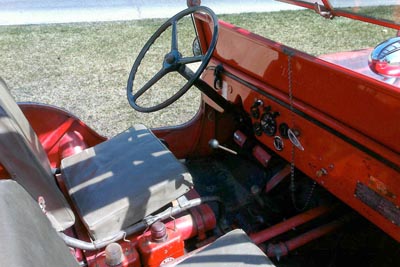 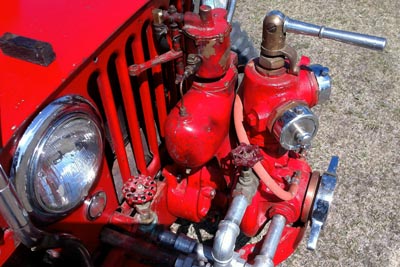 The pump manufactured by American Marsh in the U.S. is badged as a Barton Fire Pump (60K JPEG). 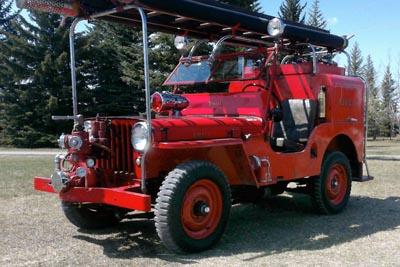 Two of the fog nozzle extensions are still in place below the ladder, as are the hand lanterns, carbon tetrachloride extinguisher, and windshield-mounted spotlights. The ladder is not original.

Thanks to Glenn Fry for these photos. 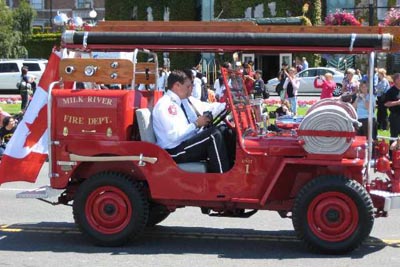 A 1947 CJ-2A in Milk River, Alberta, also came from Sterling Machine. Purchased in 1949 after a church fire, its last fire was in 1993, just before it was restored. This photo taken at a parade in Victoria BC in 2008 is courtesy of the West Vancouver Fire Service Museum. 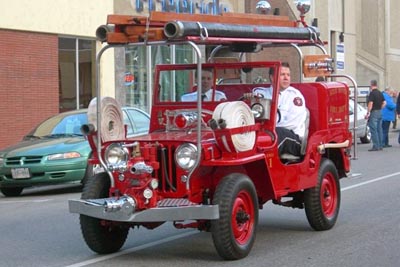 The racks for rolled hose on the front fenders are an unusual feature. The Milk River and District Fire Department also added the boards in the rear for quick access to nozzles and fittings. 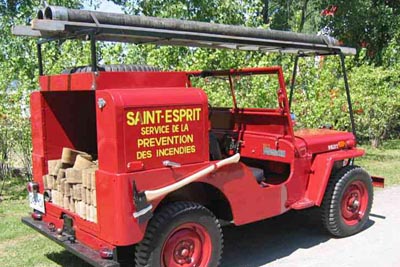 The CJ-2A seen here was bought new in 1948 by the Municipality of St-Esprit, Quebec. In service for 47 years, it accumulated only 2481 miles. 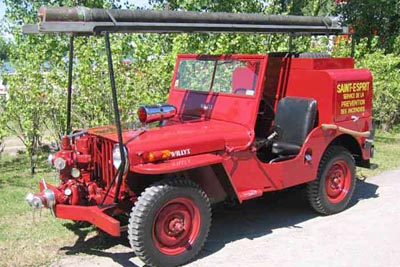 The rack supporting the hoses was replaced in 1980, and the Jeep was repainted in 1985. After its retirement in 1995 it was bought by firefighter Rene Lemieux, who had worked with the vehicle in active service from 1988.

Thanks to Scott MacKenzie of the West Vancouver Fire Service Museum for his research. Also thanks for photos from Glenn Fry, Bill Jarvis, David Ross, and Joan Hyslop at the Grey Roots Museum & Archives in Owen Sound. -- Derek Redmond

See also the story of Jeep 33 of the Toronto Islands.