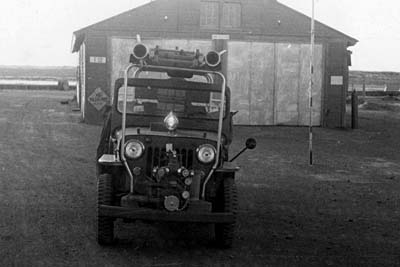 These photos were taken by SSgt. Mike Hodgden at Nome Field (an outlying field that was part of Ladd Air Force Base) in Alaska sometime during 1953 or 1954.

Any CJ-3B in 1953-54 would have been almost brand new, particularly one that had gone out for conversion as a fire engine, probably at Howe Fire Apparatus in Indiana. It's quite possible SSgt. Hodgden took the pictures on the day the Jeep was delivered to the base; there seems to be a document taped to the windshield, and a tag attached to the front footman loop.

In the large copy of the photo (70K JPEG), the sign above the doors of building T12 in the background appears to say "Fire Station." 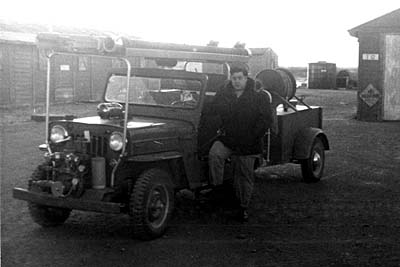 Michael Hodgden, who sent the photos, says, "My father was with the 5003rd Air Base Squadron, Unit 9, Nome Field. He was an Air Force pioneer, joining the Army A.F. in January 1947. He retired in 1971 after 24 years in the USAF, as an Assistant Fire Chief, Tech/Sergeant."

This photo of Mike was taken by one of his buddies at Nome. Another photo (60K JPEG) taken by Mike shows a couple of the other guys, identified as "Crause and TSgt from Air Police on tailboard."

In the 1950s, Ladd AFB (near Fairbanks AK) had changed roles from transferring thousands of airplanes to Russian pilots to fight the Axis powers during World War II, to guarding against the Soviet threat during the Cold War. There isn't much official historical information available about Nome Field, on the west coast. Apparently it was too close to Soviet air space to be a useful fighter base, but was kept operational as an emergency landing field. 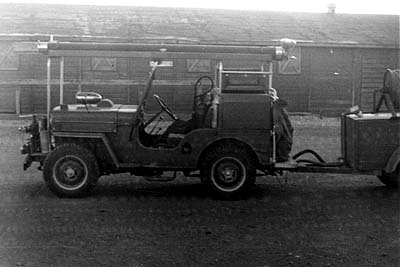 In this photo another paper tag can be seen attached to the trailer. A large CO2 hand extinguisher, which doesn't seem to be in the other photos, is now installed between the seats in addition to the standard small carbon tetrachloride extinguishers on each side. This suggests the Jeep had at least some role as a crash truck for the airfield.

It does seem a bit surprising that a cold-weather air base was provided with a standard Jeep fire engine with suction hose and water trailer, rather than a chemical-equipped crash truck.

In 1961 Ladd AFB officially became a major U.S. Army training facility, Fort Wainwright. A History of Fort Wainwright says that, "Even today, you may still hear some sourdoughs (old time Alaskans) refer to the Ft. Wainwright Army Post as Ladd Air Force Base. From a small cold-weather test station, to a 50-man detachment in the 1940's, to one of the Army's largest training areas, Fort Wainwright has come a long way."

Thanks to Michael Hodgden for scanning and sending his father's photos. -- Derek Redmond