Jeep Forward Control trucks were modified for a variety of special-purpose applications; see Chicago FD's Jeep FC Units for some fire service examples. But given their small size, FC's weren't often used by fire departments as an aerial ladder platform; the FC-170 DRW seen here may be a unique mini-aerial Jeep fire truck. 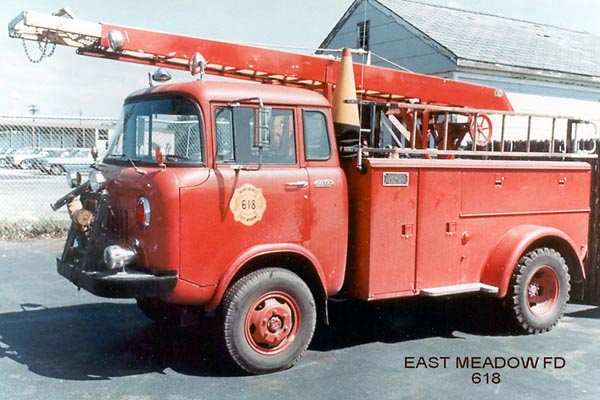 This 1962 dual-rear-wheels FC-170 was Unit 618 of the East Meadow Fire Department on Long Island, NY. It was in fact used mostly for snow plowing and maintenance. Ex-Chief Anthony Butera of the EMFD, who took this photo, says, "The mounted ladder was used to service our alarm wiring on the telephone poles." It was called on in a secondary fire fighting role only in narrow alleys or other situations where access by full-size apparatus was impractical. 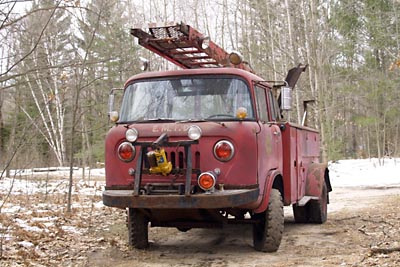 The truck (serial number 6156814 10391) now has 35,000 miles on it, and is owned by Ron Hattner in Michigan. The paint is faded but the red lights replacing the headlights still scream Fire Truck. The plow lights were apparently used regularly as headlights, and additional marker lights were added on the cowl. The truck still has much of the other original equipment as well, including spotlights, side ladder rack, original radio, and the Powers Service-Master ladder. 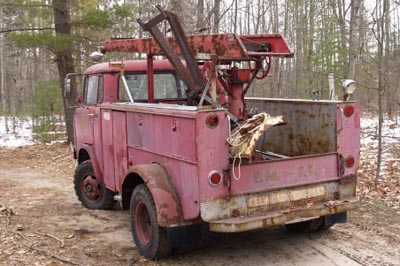 Bill Norris took these photos at Ron Hattner's place in Michigan, where Ron also has a Willys fire engine converted by Valley Fire Truck of Bay City. Bill says, "The FC looks to me like it had a Stahl body on it, and then they added the aerial ladder. I couldn't find any kind of conversion tag on it."

This shot shows the snowplow stored in the back. 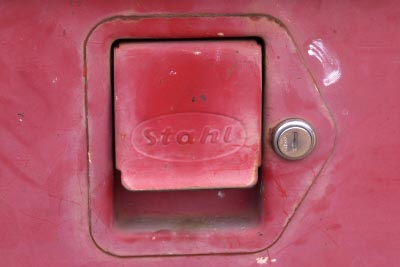 The Stahl name is found on the compartment handles. The company has been a manufacturer of commercial truck bodies and equipment for small and medium-sized trucks since 1946. Stahl doesn't sell fire trucks, but their bodies have been used by other manufacturers to build mini-pumpers. 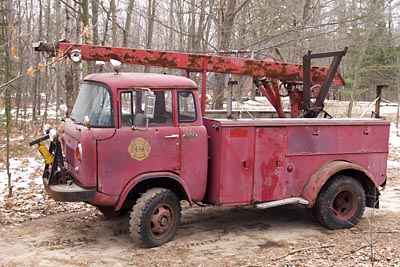 East Meadow Maintenance 618 is in running condition, and Ron has it stored safely out of the weather until he's able to do some restoration work on it.

Last updated 11 May 2007 by Derek Redmond redmond@cj3b.info
https://cj3b.info/Fire/FireFCEastMeadow.html
All content not credited and previously copyright, is copyright Derek Redmond