The most unusual roster of Jeep Forward Control fire apparatus I know of, didn't include any of the usual variety of popular Forward Control Fire Engines. The Chicago Fire Department had a collection of special-purpose units on the FC-150 and FC-170 chasssis in the 1950s and 60s. 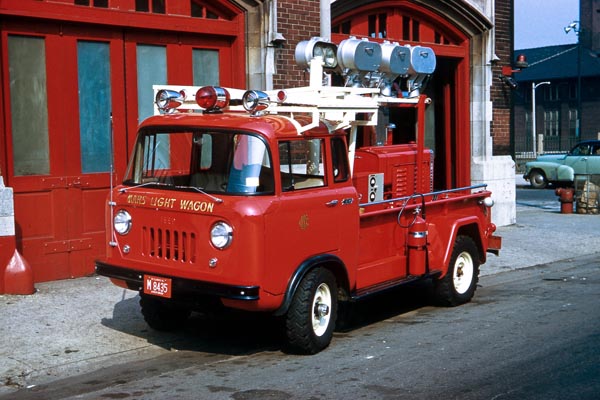 The "Mars Light Wagon" was a 1961 Willys FC-170 equipped with a generator and two banks of floodlights for illuminating fire scenes.

This beautiful photo is by the late Warren Redick, a CFD Battalion Chief and co-author of Classic Chicago Fire Department Images From the 1950s and 1960s. Courtesy of Steve Redick at KSC711. 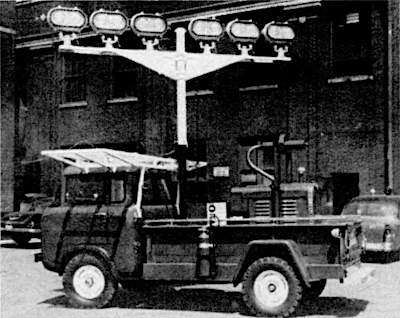 The 110-volt dual-sealed-beam floodlights (50K JPEG) branded as "The Light From Mars" (70K JPEG) were manufactured by Mars Signal Light Co., who also made the distinctive Model DX beacon on the roof. Thanks to Jim Fairweather for the detail photos.

The 9,000 watts of lighting are seen here with the hydraulic mast raised, in a small February 1969 article in Popular Science magazine. 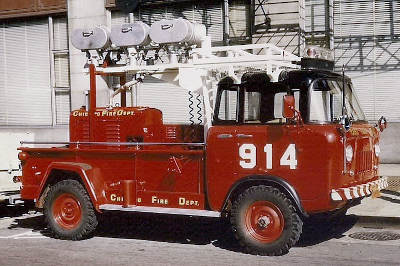 Unit 914 was the same light wagon, updated with the black and red CFD paint scheme. According to a feature in Automobile magazine in February 1999, the Chicago firehouse that quartered several of the custom FC rigs was nicknamed "Disneyland." 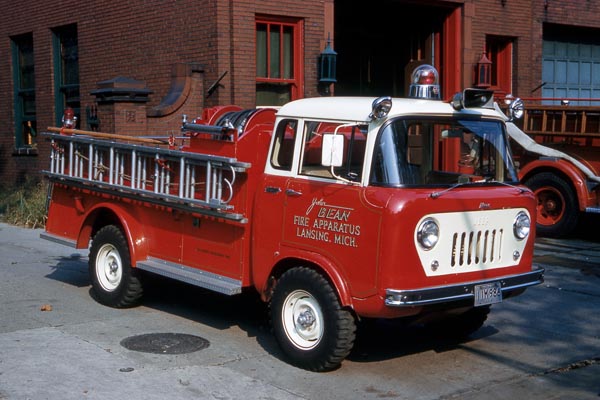 The John Bean Division of FMC Corporation in Lansing, Michigan built this high-pressure fog pumper. It was in Chicago as a demo unit when it was photographed by Warren Redick, and CFD did apparently buy the 1961 FC-170, but for some reason it was only in service for a couple of years, according to the G-series page CFDShopNumbers.com. 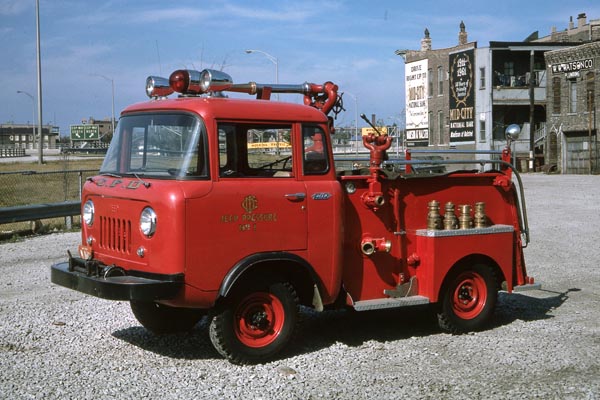 Jeep Pressure No. 1 was a 1959 Willys with a deluge gun behind the cab. The little truck could drive closer to a fire than a larger truck could, laying the hose from a pumper.

This great shot was taken circa 1961 by Warren Redick. See also a right side photo (100K JPEG) from the Ken Buchanan collection. 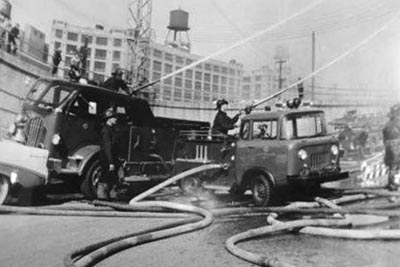 I ran across this uncredited fire scene photo of Jeep Pressure No. 1 and an Autocar squad with their deck guns in action. I would like to find more information and a better copy of this. See also an archival photo of No. 1 being shown off at a Fire Department display (120K JPEG). 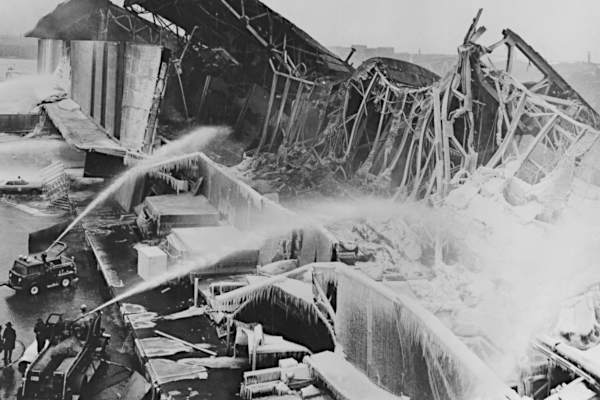 And here's an amazing shot of the morning after the McCormick Place fire of 16 January 1967, with the Jeep and an Autocar still pouring water on the ruins of the huge "fireproof" convention center.

Photo courtesy of the International Housewares Association, whose trade show was due to open that morning. 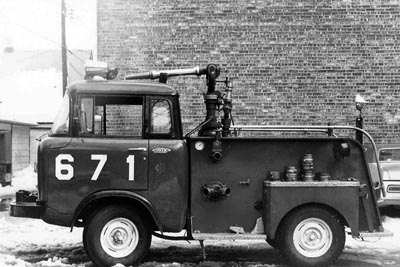 Jeep Pressure No. 1 was later renamed Deluge Unit 671, with no apparent upgrades other than a new red and black paint job. It was photographed by Dick Adelman in April 1975, and was retired in 1977. 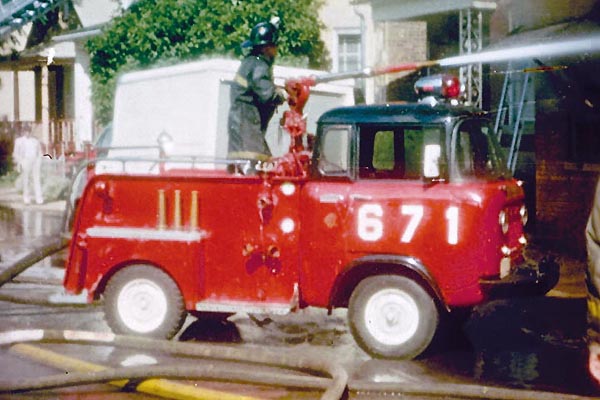 This photo of 671 in action is courtesy ChicagoFD.org. It shows how small the Forward Control trucks really are.

Robert Quinn, fire chief from 1957 to 1978, is credited with promoting the strategy of increased use of master streams from outside a building, to reduce the need for firefighters to enter dangerous involved structures. 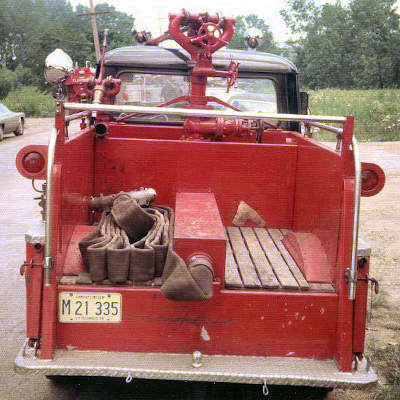 This angle makes it pretty clear where the term "turret wagon" comes from; not much there but a wooden deck and fifty feet of supply hose. The photo was taken circa 1976, not long before 671's retirement in 1977. Thanks to firemann57 on Flickr. 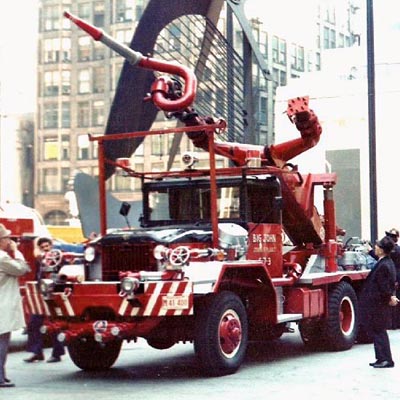 The monitor stream strategy led to the development of larger turret wagons capable of hitting fires higher up in large buildings. Unit 673, named "Big John" after its designer John F. Plant, had a deluge gun designed for a fireboat mounted on an International 6x6 chassis with hydraulic lifts, in 1970. See a rear view photo (70K JPEG) by Ray Plum, of Big John in action. 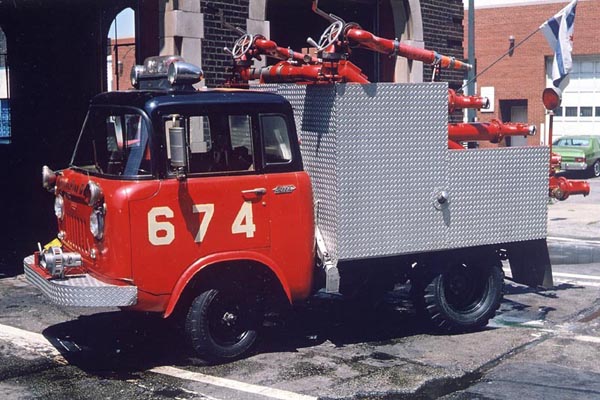 Big John's litle brother was Unit 674, built on a 1961 FC-150 chassis, and known as "Little John." Jack Calderone, editor of Fire Apparatus Journal, supplied this photo and says Little John's rear deck and body were fabricated in the CFD shops. It was in service from 1971-77. 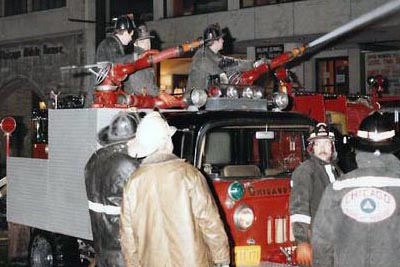 Little John could direct two high-volume master streams, supplied by multiple pumpers, at large fires. It's seen here doing that job, in a photo from ChicagoFD.org. 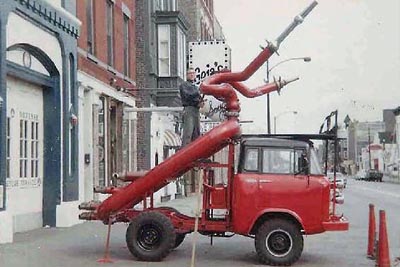 CFD unit 672 known as "Big Mo" was built by the shops in 1966, with a pair of the fireboat turret nozzles (70K JPEG) and a double manifold (70K JPEG) with 32 inlets capable of supplying 8000 gallons per minute. The theory was to create large water streams quickly with minimal manpower, although the hard part was supplying enough water.

This massive gun was initially installed on the 1962 Jeep seen here, with large tires and stabilization jacks added. Thanks to ChicagoFD.org for these photos. 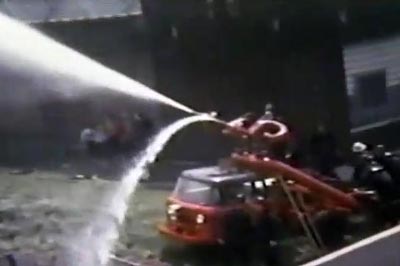 At one fire, Big Mo was reportedly able to hit the 17th floor with a 1700gpm stream peaking at 230 feet. The shot of Big Mo in action here comes from a Chicago FD film available on YouTube.

See also a front view (90K JPEG) and a great shot of the gun being tested at Navy Pier (70K JPEG) courtesy of ChicagoFD.org. 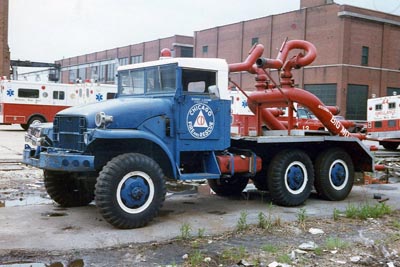 The weight and force of that much water proved to be more than the Jeep could safely handle, and Big Mo was moved to a 1953 International 6x6 chassis, and then a 1957 GMC painted Civil Defense blue. See also a rear view (80K JPEG) of the new Big Mo in action (photo courtesy Steve Redick.) 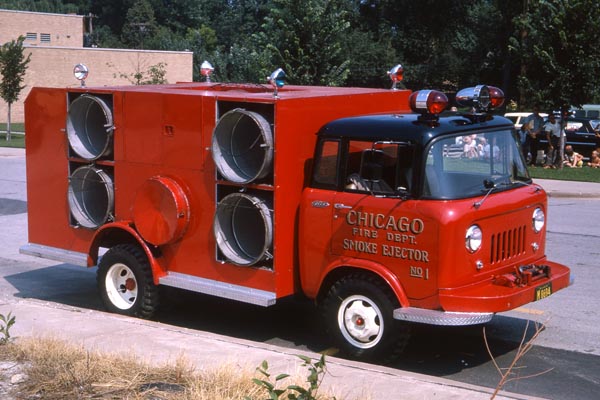 Ken Buchanan says, "This 1961 Willys Jeep carried portable smoke ejector fans, plus a large one permanently mounted on the rig, which used canvas tubes to vent the smoke (like a big vacuum cleaner.) Note the green flasher light on the upper passenger side of the box. All Chicago FD rigs have the marine-style red to port, green to starboard lighting." 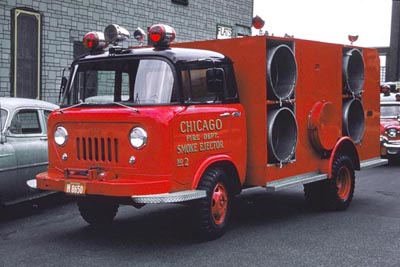 Warren Redick also photographed the identical Smoke Ejector No. 2, CFD 922. These FC-170 Jeeps were well-marked with a pair of Model DX Mars lights, and like the turret wagons they had front winches. They were built by the John Bean Division of FMC Corporation in Lansing, Michigan. Unit 921 retired in 1975, and 922 in 1976. 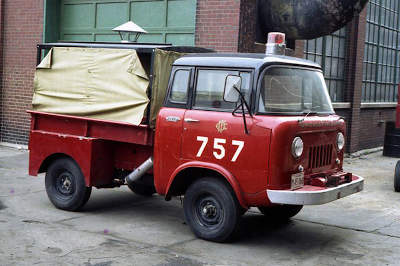 This 1962 Willys served as a Foam Deluge Unit from 1972 to 1977, according to CFDShopNumbers.com where it's listed as Shop Number G-194. I haven't seen any photos of it in that configuration.

In 1978 the FC-150 was converted as Thawing Apparatus 757 -- basically a big stove on wheels to produce steam for thawing hydrants. 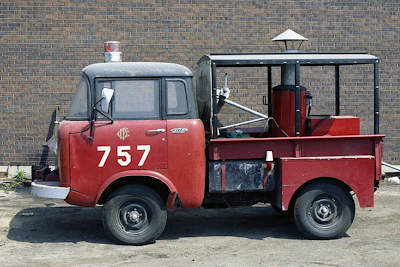 The same Thawing Unit is seen here with its rear tarps open. The FC-150 was in service in this role until 1986. Both photos by Bill Friedrich, courtesy of IllinoisFireTrucks.com. 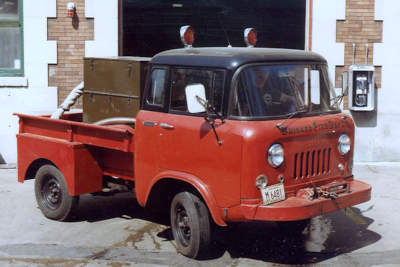 Another 1962 FC-150 served as Arctic Starter Unit 754, kept with Engine 109 and Truck 32 until 1990. It continued in use by the CFD Shops as 761 for some time after that. Photo by Bill Friedrich, courtesy of IllinoisFireTrucks.com. 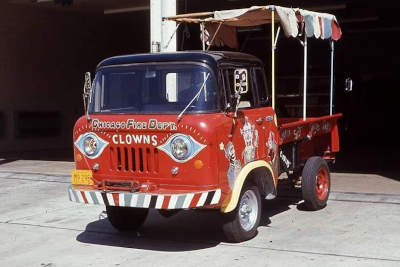 This undated photo shows an FC-150 adopted by a group of CFD clowns, possibly the "Funny Flames" (70K JPEG) profiled in a 1968 Fire Engineering article.

I would have guessed that this was built from one of the retired FCs, but according to CFDShopNumbers.com, it was a 1962 FC-150 which entered service as the "Clown Wagon" on 5 December 1962 and carried CFD shop number G-198. 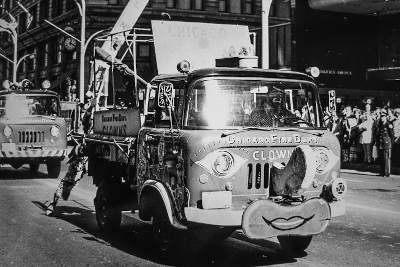 Steve Redick found this photo of the Clown Wagon in a parade, with a big nose and lips added on the front, not to mention flashers and a siren.

Anybody have any further details on the Clown Wagon?