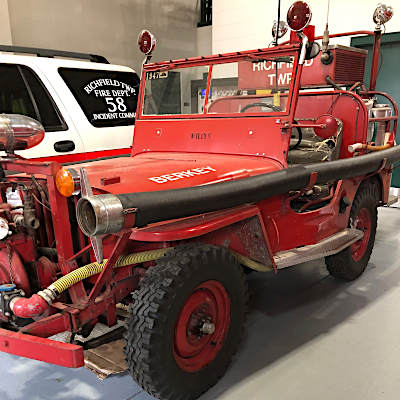 The Richfield Township Fire Department in Ohio (formerly the Berkey Fire Department) generated some discussion and controversy on Facebook, with their March 2021 announcement of a sealed-bid auction for their 1945 CJ-2A Jeep Fire Truck, certainly one of the oldest fire Jeeps still in existence.

Local folks were quick to suggest the Jeep should be kept in the community, but the Fire Chief made it clear that the Department needed the space in the fire hall, and badly needed the money for upgrades to apparatus and equipment for its volunteers. In the end, the successful bid of over $36,000 from a local buyer appeared to be a good outcome for all parties.

The early history of the Jeep is a little bit unclear. In 1946, Willys-Overland reportedly supplied the First Civilian Fire Jeep (a CJ-2 Agrijeep modified by American Marsh Pumps) to the recently established fire department in Berkey, a small town near Toledo, for testing and demonstrations. Willys took photos and movies of the CJ-2 in action, but the frame apparently cracked during the testing, and that first Jeep was replaced with an early CJ-2A.

Photos like the one above (see more details and photos in CJ-2A Fire Engine History) show a 1946 live burn training exercise with a Jeep that has some features of both the Agrijeep and the 1945 CJ-2A. My conclusion so far is that this is the replacement Jeep and indeed the same Jeep currently being auctioned. Some of the Jeep's equipment may have come from the Agrijeep with the cracked frame, and it was subsequently modified over the years. 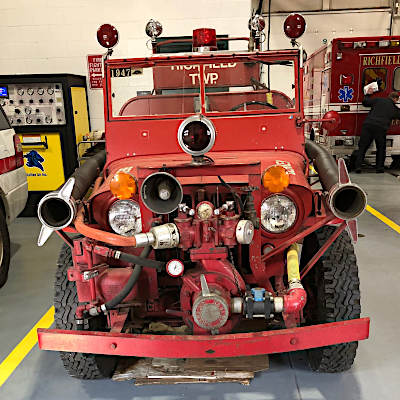 As Berkey Fire Department acquired new apparatus, the Jeep probably became exclusively a brushfire unit, not requiring a ladder, so the overhead rack was cut off. The suction hose supports were moved down, a water tank added in the hose bed, and a rubber hose pre-connected to the Darley Champion pump. Other additions included an equipment tray and warning beacon replacing the spare tire above the hose bed, and a new siren on the front. 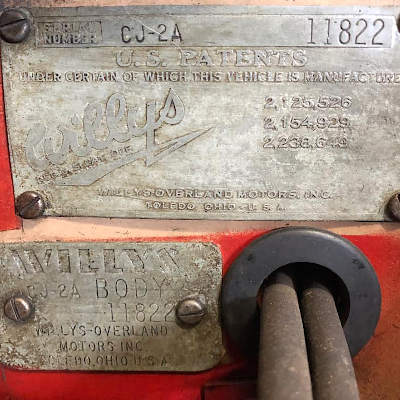 Thanks to Keith Miller for photographing the serial number plate which confirms that this Jeep is the third from last CJ-2A built during the 1945 model year. The initial announcement of the auction had described the Jeep as a 1947 model, and the earlier vintage went some distance toward reducing initial grumbling about the minimum bid of $10,000, among those who didn't attribute any additional value to the Jeep's fire apparatus history and equipment. 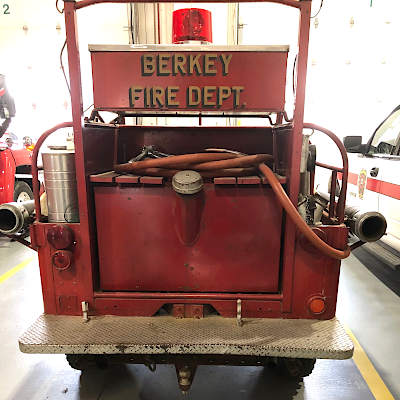 Berkey FD was renamed Richfield Township FD in 2002, but they kept the original name on the Jeep. It was retired from active service in 2007, but many community members still remember the Jeep well from occasional parade appearances and even from its service days. This led to a desire to see it remain in the area, but Ohio museums had been hesitant to even accept it as a donation because of the potential cost of restoration. 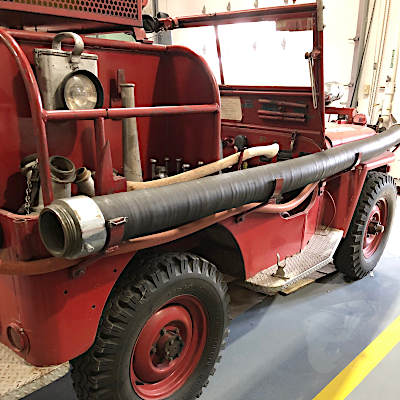 Like other 1945 and early-1946 CJ-2As, the Jeep has a column shift (430K JPEG). One of its more visible flaws at the time of the auction was the worse-for-wear upholstery on the driver's seat, which attracted some comments on Facebook. There were also some rust issues and oil leaks, but it was in running condition.