Although Willys sold ambulances around the world through its export division, and right-hand-drive was offered as an option, Australia had the manufacturing capacity to build this kind of vehicle locally, allowing the units to be designed to local specifications.

In 1959, the Australian government's Civil Aviation Department ordered eight Jeep Ambulances, to be used as crash rescue trucks at airports. They would carry four stretcher cases, or eight fire crew as passengers. 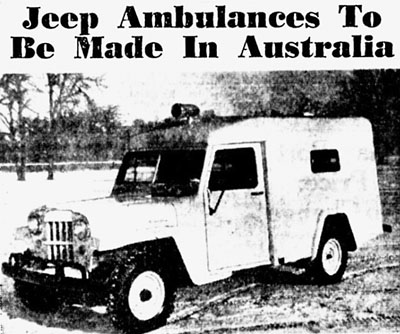 An article in the Sydney Morning Herald (18 June 1959) announced that the ambulances would be built at the Willys Motors plant in Brisbane, using some Australian components.

The article also stated that, "In service they will be equipped with hoses and other firefighting gear and emergency first aid packs. The finished ambulance will weigh 7,500 lb., nearly 3-1/2 tons, fully loaded."

Vaughn Becker says, "My understanding was they all came over CKD as cab/chassis and were assembled in Brisbane and the ambulance body built and installed by either Athol Hedges or Superior Body Works, both Brisbane firms." 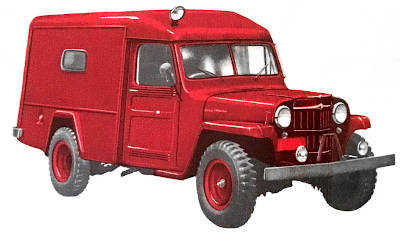 In a brochure (310K JPEG), Willys Australia called the truck an "all-purpose fire/ambulance vehicle," even though as delivered it was not equipped in any way as a piece of fire apparatus, and appears to have been basically the same as the Willys Ambulance built in the USA. The fleet for the government's airfields was painted red. 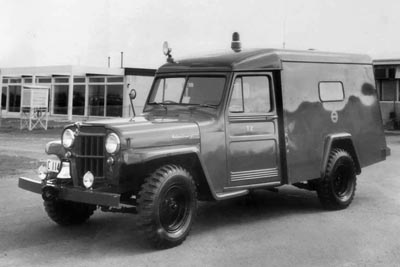 I wondered what the "A"-shaped bracket on the front bumper was for, until I saw this photo courtesy of Tim Lovelock of a unit in service circa 1967 at Moorabbin Airport near Melbourne, with a bell mounted there. 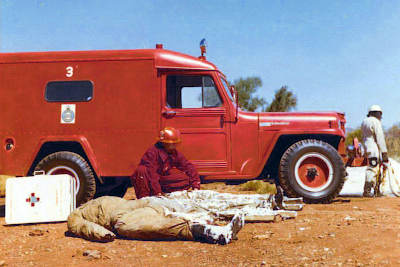 Mock casualties have been on the receiving end of some firefighting foam in this rescue drill. The side of the ambulance carries the crest of the Department of Civil Aviation's Airport Fire Service. 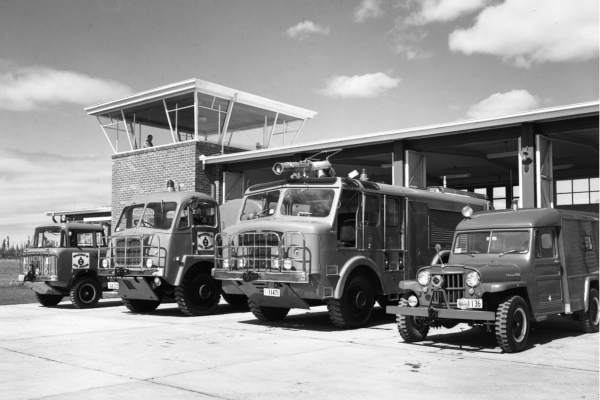 A photo courtesy of Mick Goodrick of the fire and rescue fleet at Hobart Airport in Tasmania shows a siren on top of the front bumper bracket.

In the background is an Airfield Light Rescue Tender built by Presha Engineering on a Jeep FC-170 chassis. 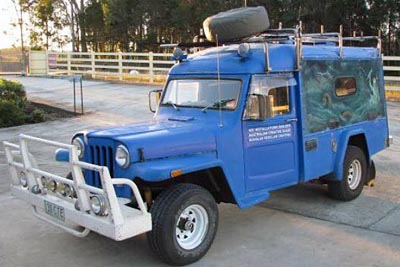 It's not clear if more than the eight ambulances ordered by the government might have been built, but it seems likely because as of 2018 there are quite a few survivors. This one in Brisbane was converted into a camper. See also a rear view (50K JPEG) and the interior (350K JPEG). Photos courtesy Mark Hammond.

In New South Wales prior to 1972, local ambulance services had a fair degree of autonomy. Paul McCurley says, "If a region wanted to start a service in their community, they formed a District Committee that was overseen by the NSW Ambulance Transport Service Board. The Committee was responsible for their own fleet of vehicles. This led to a wide variety of vehicles and conversions being used across the state." 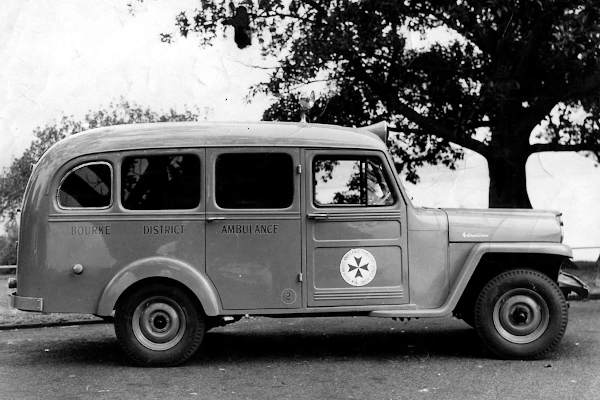 This unit was built on a 1954 Willys truck chassis by W.S. Grice Motor Body Works in the Sydney suburb of Summer Hill, and purchased by Bourke District in New South Wales in 1954. Grice specialised in ambulances and hearses, built on many different chassis from the late 1920s to the 1970s. 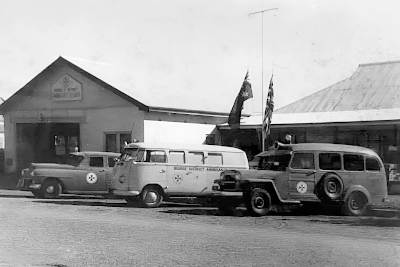 The Willys shared duties in Bourke with a Volkswagen Kombi Transporter. Paul says "A newspaper article dated 30 September 1955 mentions the Kombi was due to arrive in a few weeks. The 1958-59 Annual Report for the Bourke District mentions it was disposed of during that financial year, so it only lasted out there from 1955 to 1959. The Dodge to the left is a 1953 model." 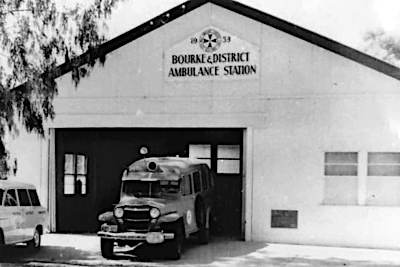 At the time the Bourke District Willys was built, it is believed to have been the only 4WD ambulance in operation in NSW, and was one of only seven similar models built by W.S. Grice. This photo is courtesy Jim Beck. 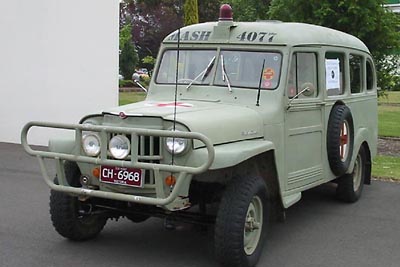 Ted Robinette took this photo of the vehicle after it was painted by later owners in Melbourne, and he says, "Grice had a contract to build six for use in Malaysia, and the seventh was built for the Ambulance Service in NSW. They had heard of the Malaysian contract and needed a 4WD to negotiate the terrain 'back of Bourke'. It could carry five patients with three on stretchers and two sitting."

See also a rear view photo (70K JPEG) of the MASH paint scheme. Note the extra door on the driver's side. 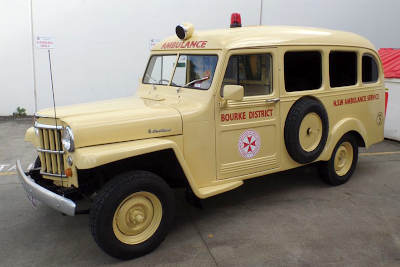 The Bourke Willys, with its recessed spare wheel, is now in the collection of the Ambulance Victoria Museum in Bayswater, Victoria. As of 2019 it was repainted in NSW Ambulance cream rather than the original brown. The front and rear bumper additions from the MASH period were removed. See also the right side (100K JPEG). Photos courtesy Terry Brooks.

I wonder if any of the other six survive in Malaysia! 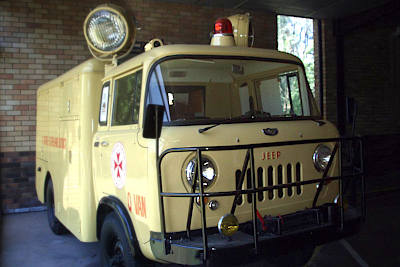 Known as the Res-Q-Van or simply "Q Van", this 1961 Willys FC-170 served with the St. George-Sutherland District in Sydney, as the first dedicated rescue truck in Australia. It has now been restored and preserved as part of the New South Wales Ambulance historical collection.

See more photos and details of the The Q Van. 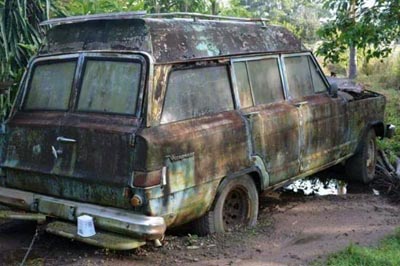 In early 2018 Mick Broomfield found this photo of a Wagoneer with headroom added. Former Willys Australia employee Barry Massey confirmed this unique, special-order ambulance was built for Cooma, New South Wales, at the plant in Brisbane, with doors from a panel van, and top fabricated by Athol Hedges Bodyworks. 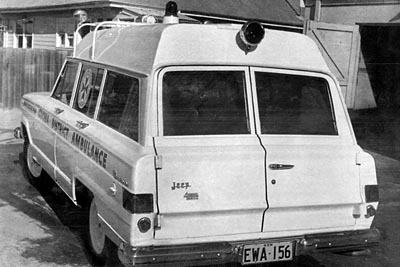 Herve Gruyer dug up this picture of the Wagoneer circa 1966, when newly delivered to New South Wales Ambulance in Cooma, which is known as the "Gateway to the Snowy Mountains." 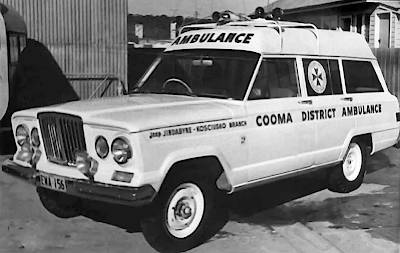 The Wagoneer would have had the 230ci Tornado engine, and apparently was delivered in NSW Ambulance's new white paint scheme.

Prior to 1991 the Queensland Ambulance Transport Brigade was also a decentralized organization of local committees. The resulting variety of vehicles in use across the state in the 1950s and 60s included at least a couple of Willys-based ambulances. 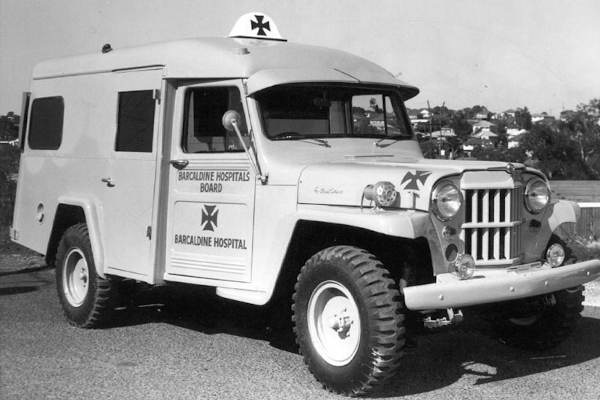 Vaughn Becker says that most of the over one thousand 6-226 4x4 units produced by Willys in Brisbane, Australia from 1958-68 (see Jeeps in Australia) were in fact the cab/chassis version rather than the complete station wagon.

A unique but fully-equipped ambulance built on this platform is shown in this photo as delivered to Barcaldine Hospital in Queensland. It follows the general style of the U.S. factory ambulance but has differences including a side entry door in the rear body. 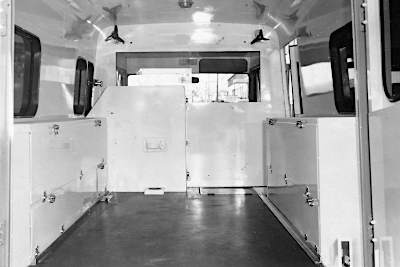 Instead of the multiple seats and stretcher racks of the standard Willys Ambulance, the interior of the Barcaldine unit has more storage space, and an attendant's seat that folds into the floor just inside the side door. 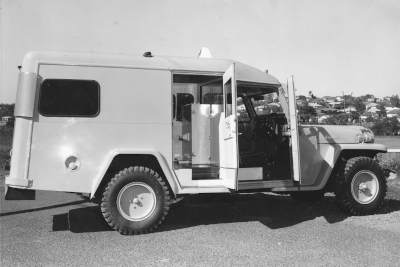 The folding seat is visible in this view with the doors open.

The apparently unique truck still survives as of 2020. Vaughn Becker took a photo (220K JPEG) circa 2000 at Mount Isa in northwest Queensland. Owner Tony D'amico took photos of the engine (320K JPEG) and the Willys serial number (160K JPEG) which indicates the cab/chassis unit was delivered to Motor Body Specialists in Brisbane in primer in April 1965. 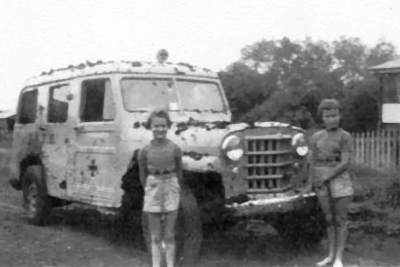 This early-fifties Willys served as ambulance at Springsure in the Central Highlands of Queensland from about 1954 until 1960, when it was replaced by an International AA-120. The two little girls in this picture are the daughters of Superintendent Bill Ogston. Vaughn Becker calls him "something of a legend in the Queensland Ambulance Transport Brigade (as it was called then) and in Springsure. He had that job for 30 years until his retirement in 1975, and most of the miles done by the Jeep would have been driven by him."

These photos came from his daughters, via Ray Edgar and Vaughn Becker, who also says, "The generous serving of mud confirms it used to rain a bit in those days." 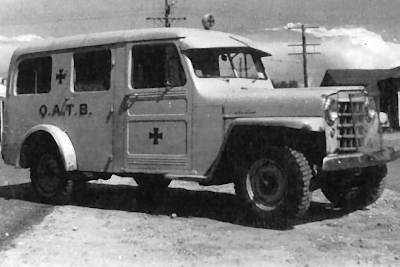 Like the Bourke and Barcaldine units, the Springsure body had a side door behind the driver's door. Where the body was built is unknown.

After some muddy service calls like the one above, rear mudguards were added, and a screen in front of the radiator. Another later addition was the sunshade above the windscreen. 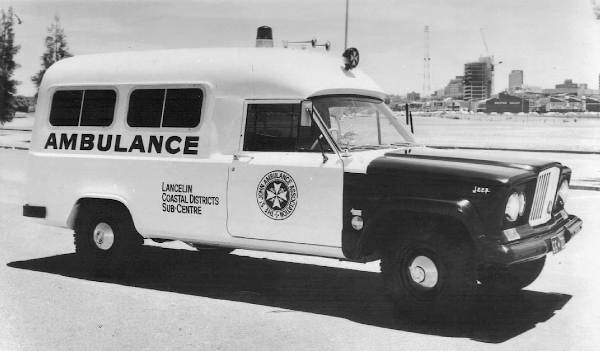 A 60s-era ambulance conversion was this J3600 cab and chassis modified for Lancelin, on the coast north of Perth in Western Australia. The builder of the body is unknown, although it was probably one of the Brisbane firms since this is a Willys Motors photo, taken before the vehicle was shipped across the continent. 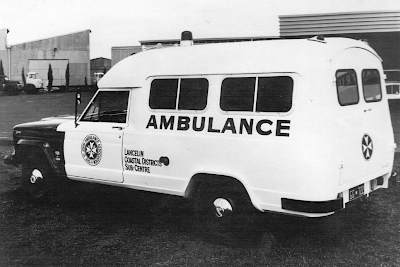 The 1960s saw significant growth in the need for rural ambulance service in Western Australia, as the state's population grew rapidly. The rural focus likely mandated plenty of 4x4 vehicles, but this is the only Willys example I have run across. 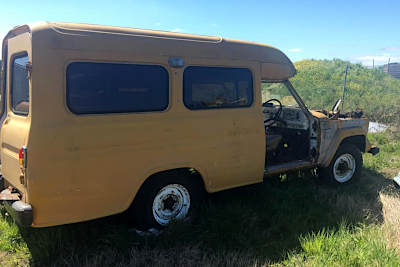 This 1970 Willys Motors Australia J2000 apparently was used as a bus following the end of its ambulance career, but the details of where it was built or where it served as an ambulance are currently a mystery. See a front view photo (170K JPEG), in sad shape as of 2020.

See other Willys Ambulances and Willys Military Ambulances on CJ3B.info.