I noticed recently that I had begun to run across a number of interesting photos of CJ-3B Jeeps in different corners of the world, but all dating from circa 1963. They were begging to be collected on one page, so here they are.

Christmas Island in the Indian Ocean (see a map, 250K JPEG) was named when it was sighted by a British ship on Christmas Day 1643, and is a Territory of Australia. The small island is "dog shaped" as seen in the outline map in the center of its flag. The flag also includes the Southern Cross constellation, and the golden bosun bird representing the unique and diverse flora and fauna of the remote island.

(Christmas Island should not be confused with Kiritimati, formerly known as Christmas Island, a large coral atoll south of Hawaii, where nuclear bombs were tested from 1957-62. That island had been named by Captain James Cook when he visited it on Christmas Eve 1777.) 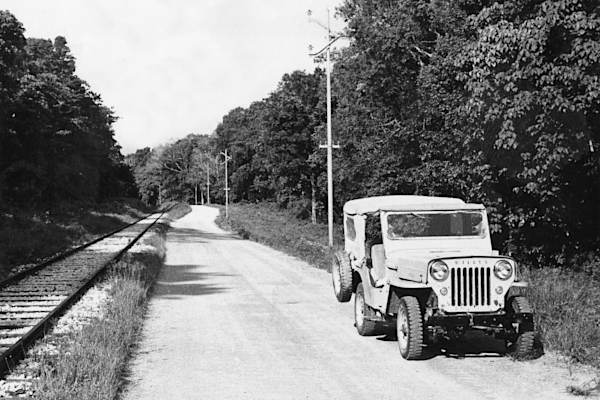 The late Philip Holberton took this photo on Christmas Island circa 1963, looking along Murray Road and the railway running from South Point, where millennia of guano deposits were mined for phosphate, to the loading dock at Flying Fish Cove near the northern tip of the island.

Martin Holberton says, "I found this old photo of my father's, taken in 1963-1965. The Jeep was owned (I believe) by the phosphate company and used by my dad, while he worked on the island. The side steps would have helped my mum get in and out while juggling three kids under five years old!" 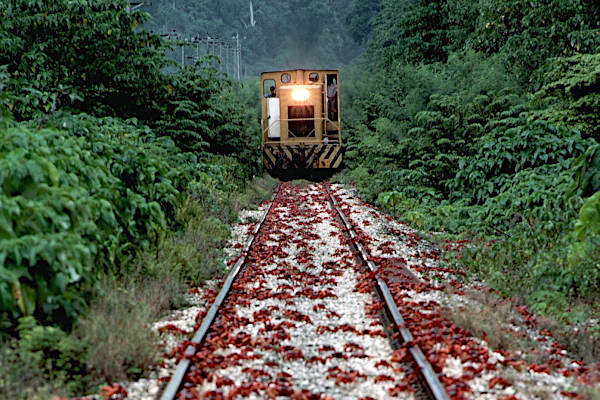 The railway carried phosphate trains and passenger trains including the daily "school train" and the "picture train" to take people to the cinema, until it was abandoned in 1987. Sometime prior to that, engine number 9001 was slowed here by the annual migration of Christmas Island red crabs to the ocean to lay their eggs.

Interestingly, this 44-ton diesel locomotive was built in 1957 by Canadian Locomotive Works in Kingston, Ontario, the home of CJ3B.info! 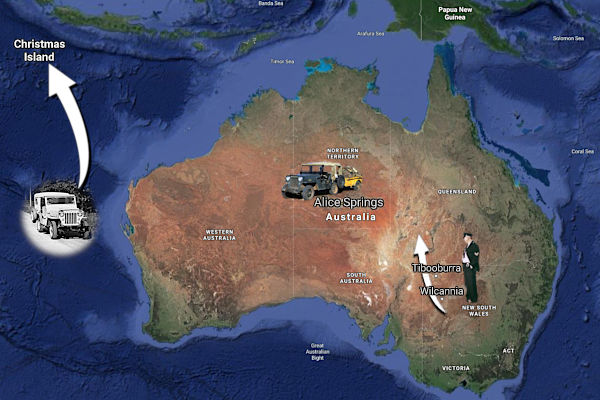 Although it's an Australian Territory, Christmas Island is nearly a thousand miles from the Australian mainland. It was occupied by Japanese forces during World War II.

(The locations of two photos seen below are also shown on this map.)

Over a thousand CJ-3Bs had been imported by Willys Australia in 1958 and had spread across the country, becoming important vehicles on sheep and cattle stations (ranches) in the outback by 1963. 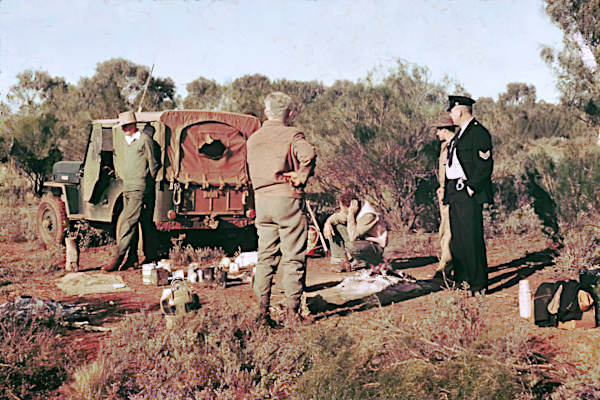 Mick Broomfield provides the amazing story behind this photo of a stop along the trail to boil the billy for some tea:

"On the road between Wilcannia and Tibooburra in 1963. The thief standing next to the CJ-3B had knocked it off from a sheep station and was heading for Queensland. The copper was in a Land Rover and the others were in a Nissan G60 ute." (Note: Land Rover and Nissan photos shown for reference only.) 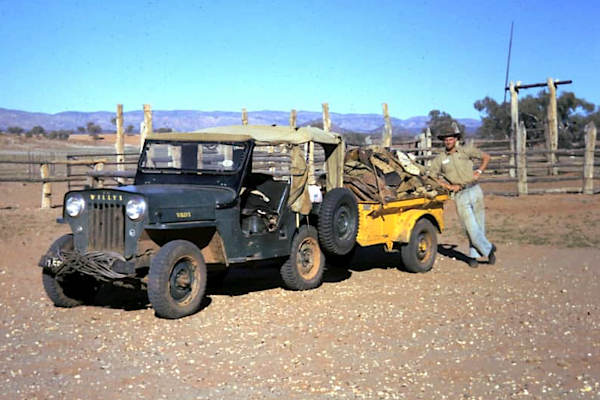 Further into the outback is this cattle station near Alice Springs, in the center of the continent. (See CJ3B.info's visit to Alice Springs with the 2019 East-West Simpson Desert Expedition.)

The station had this 3B in the sixties, and it was probably a '58 since it was one of the few given a lefty spare by Willys Australia, as part of their right-hand-drive conversion. Here it's pulling a trailer loaded with gear for a mustering camp, including saddles, tarps and swags. 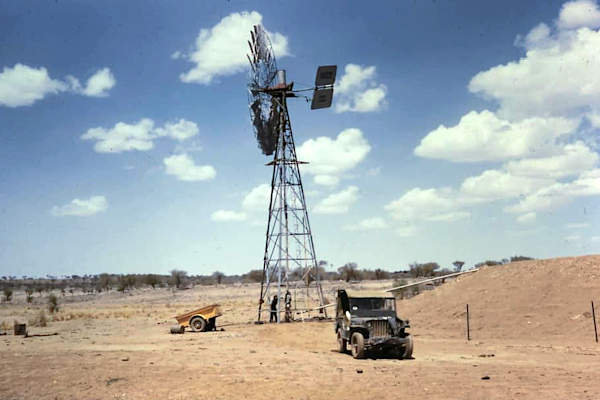 Mustering a "mob" of animals is a difficult and sometimes dangerous job for the stockmen on the vast Australian cattle stations.

Cattle mustering lends itself towards the use of horses, but Jeeps come in handy, and this station had clearly had one even before the 3B. This WWII veteran is carrying a water bag on the front.

Thanks to Mick Broomfield for these photos.

Mustering may be conducted for a variety of reasons including livestock health treatments, feeding, branding, and transport or droving to another location. Whether it's the Australian outback or the western USA, the stockmen or cowboys working the muster need to be fed, and the traditional way of doing that is the chuckwagon. 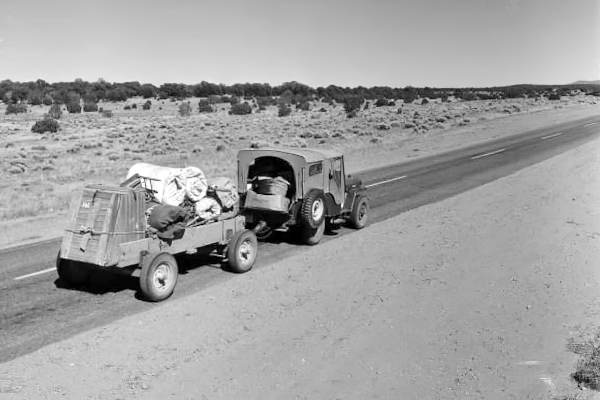 This is a chuckwagon at the Double H Ranch in New Mexico, a 135,000-acre property which as of 2021 is still running cattle, hay, and commercial elk hunting.

The wagon is a field kitchen that would typically carry preserved meat and other food supplies, plus firewood, a water barrel, and a "chuck box" that folds down to reveal shelves and a working surface. This example is also loaded with what looks like tents -- and a coffee table! Possibly for one of the hunting trips the Double H offers. Photo courtesy David Baumann. 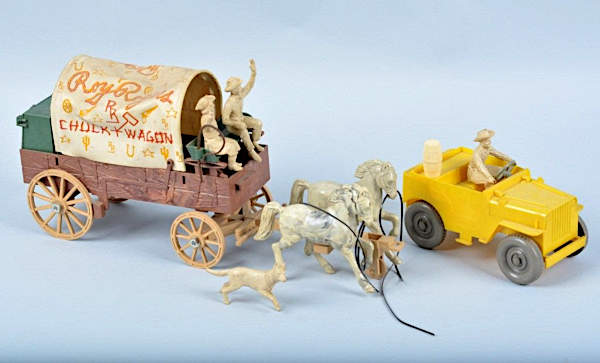 I had to think for a moment about where I had previously seen a photo of a CJ-3B and a chuckwagon, and then I realized it was a Roy Rogers playset from Ideal Toys, with "Nellybelle" the Jeep modelled as a CJ-3B.

Here's a location I wanted to include on this page because it's a prominent spot geographically, but not very well known. Ceuta ("soota") is a Spanish city that happens to be in Africa, on the coast of Morocco, across the Strait of Gibraltar from mainland Spain. 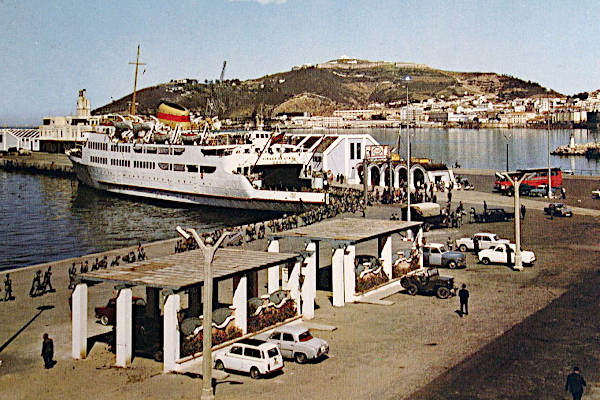 This postcard photo of Ceuta has Mount Hacho in the background, and Spanish soldiers at dockside, marching onto a ferry for rotation from Africa back to European soil.

The Jeep parked in the foreground suggests that some of their officers got a ride down to the dock. 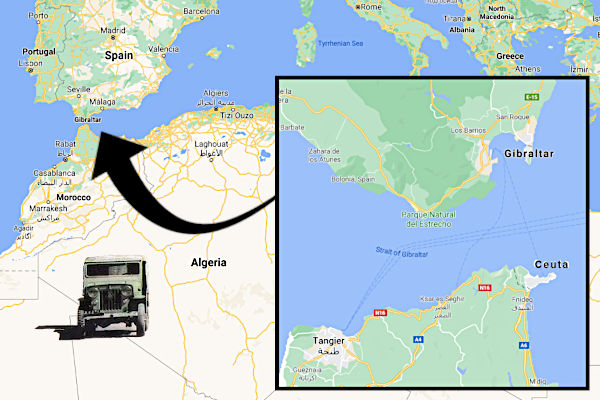 The inset on this map shows Ceuta and Gibraltar forming the gateway from the Mediterranean Sea into the Atlantic Ocean.

(The map also shows the locations for the photos in Algeria, below.) 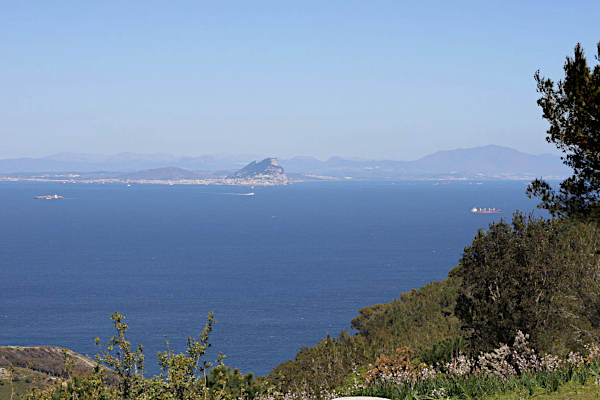 A 2012 photo looks from Ceuta north toward to the rock of Gibraltar, across the busy shipping lanes of the Strait.

Gibraltar ironically is a British Territory, which Spain is not too happy about, while Morocco is similarly unhappy about Spain's control of Ceuta, which dates from 1668.

Right next door to Morocco is Algeria. The Algerian flag had been the revolutionary flag during the Algerian War of Independence from France, during 1955-62. (For more on the war, see The Blue Caps: French Jeeps in Algeria, 1957.) 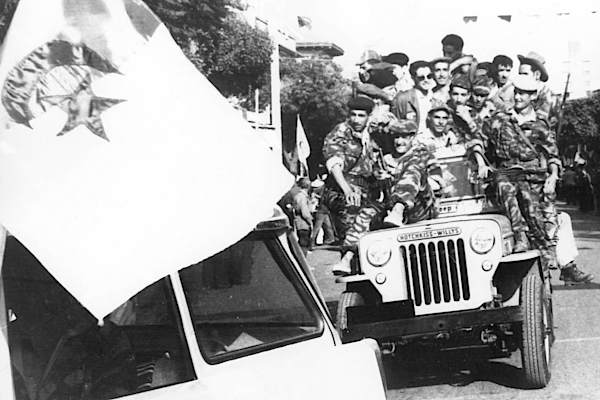 Immediately after independence, tensions had developed in the Kabylie region east of Algiers, which opposed the single-party central government. This resulted in two years of insurgency in the region.

A hand sewn copy of the flag is seen here flying from a car in Tizi Ouzou (see the map) in October 1963, as rebel soldiers test the limits of a Hotchkiss JH-102. 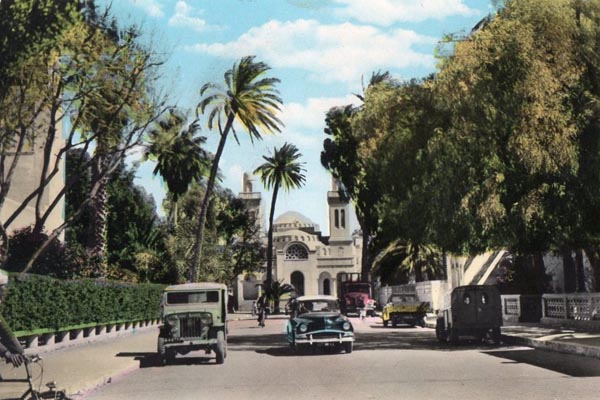 This hand-tinted postcard showing Avenue Marguerite in Laghouat, south of Algiers (see the map) is undated, but appears to also be postwar, circa 1963. The landmark Church of Saint Hilarion at the end of the avenue has since become a museum.

Moving to colder climes brings us our first example of a hardtop Jeep!

Québec City has held its Winter Carnival every February since 1955, and ice sculptures are a big feature of the event. 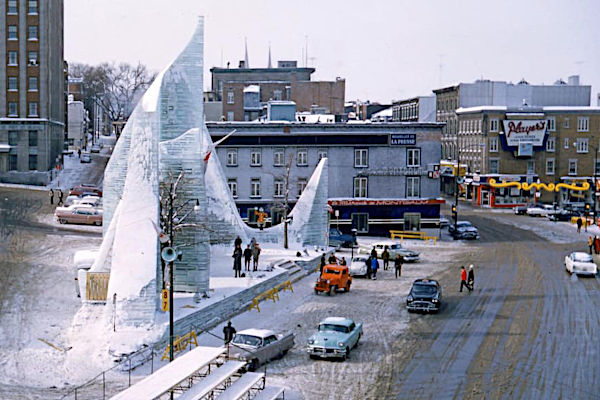 My guess is that the orange CJ-3B is a municipal vehicle. 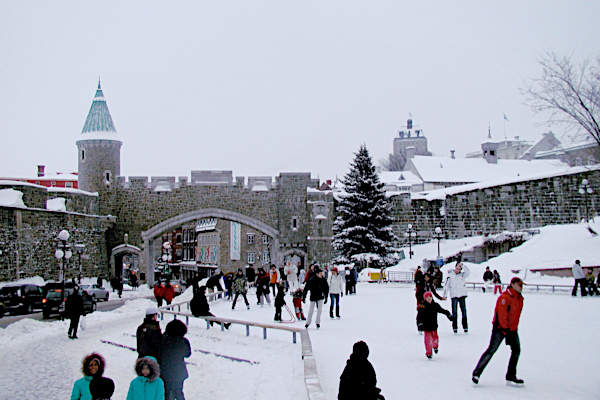 What might be a complete surprise is that if you turn around in the opposite direction from the above picture, what you see is the fortifications of Old Québec, a UNESCO World Heritage Site. This more recent photo (by Duce94, used under CC) also shows the 1987 renovations to Place D'Youville, which is now a huge skating rink every winter.

The Saint Jean Gate was originally built in the late 17th century, and includes stairs to the top of the fortifications, from where the above photo was taken. 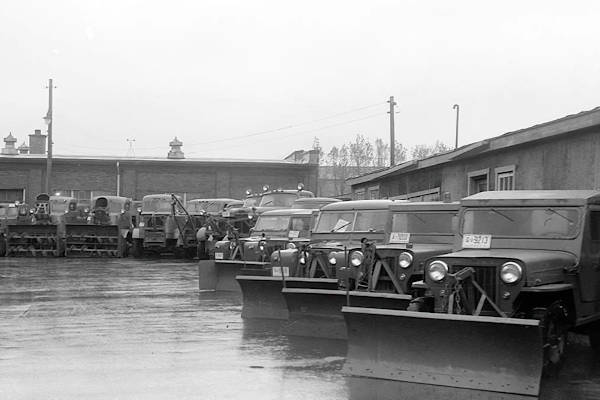 I don't know if these Quebec City snowplows photographed in October 1961 are orange. Three CJ-3Bs stand alongside a couple of Land Rovers, something you would never see in the USA, and even in Canada is pretty unusual.

Some Canadians were far away from home during 1960-64, on U.N. peacekeeping duty in the Congo. 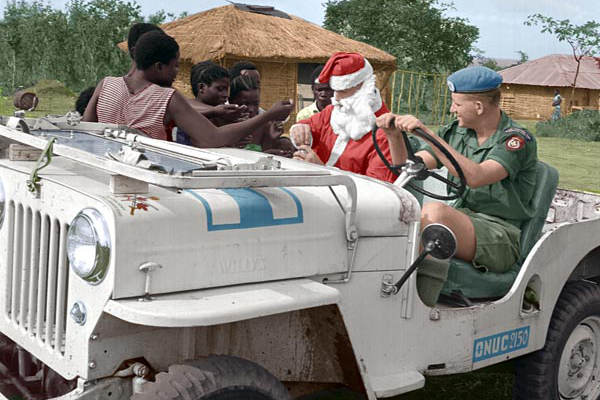 Members of No. 57 Canadian Signals Unit, part of the peacekeeping force, visited villages near Leopoldville to give out candies and gifts at Christmas 1963. The Jeep was driven by Private Kenneth Goble, with Corporal Maurice LeClair as Santa Claus. This Canadian Army photo, colorized for CJ3B.info, was originally in grayscale (230K JPEG). 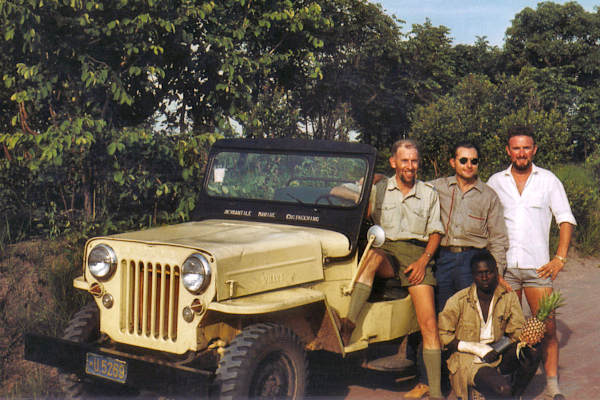 This CJ-3B, also seen in the Congo in the mid-1960s, belongs to Mercantile Marine Engineering, a large Belgian drydock and construction firm. An interesting detail is the protective guards over one set of front marker lights.


Thanks to Google for the base maps. Flag of Ceuta rendered by Ulaidh, used under CC. -- Derek Redmond

For more high hood photos in every corner of the world, see: